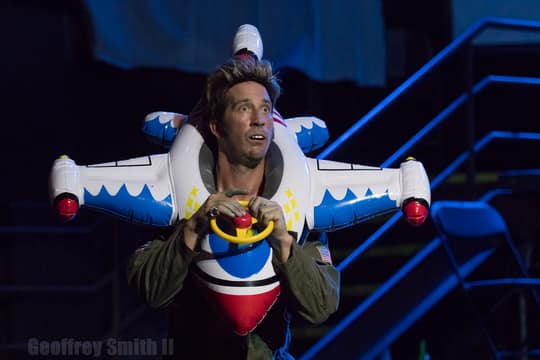 "Top Gun: Maverick" is a movie where our heroes are trying to start World War III. The US military is selecting pilots for a bombing run over an Iranian nuclear facility near completion, one which was built "in violation" of an internationally-recognized treaty. This, of course, is the exact opposite of what happened in real life: the US violated the JCPOA agreement with Iran, and the Iranian government continued to obey it even when we no longer were.

At no point in this two-hour monstrosity is it ever mentioned that the Iranians would strike back instantly, sinking the aircraft carrier that Cruise took off from and beginning a war that would annihilate millions of innocent lives. In fact, from the perspective of international law, the Iranian government would be in the right to do so, as Tom Cruise just executed an illegal and unconstitutional act of war on a foreign power without congressional approval. If every single one of our plucky heroes had died during their training montages, it would have made the world a safer place. [...]

Even if one can ignore the rabidly bloodthirsty nature of this movie, it is still absolute garbage. The morals of this story are, and I am not exaggerating in the slightest: soldiers should ignore orders to stand down, and you should take actions without thinking about them. Our heroes follow these lessons throughout the story and are constantly rewarded for it. It is a child's understanding of bravery and honor, coated in thick layers of some of the most painfully sentimental slime that Hollywood has ever produced. [...]

Frantic hiring, ill-equipped staff, and data-security lapses as the company closed lucrative deals with unemployment agencies and the IRS:

Document reviewers were expected to rule on a document every 20-30 seconds, video chat agents were expected to verify about 40 people a day, and email representatives were expected to send around 70 emails a day, according to the former employees. Team "leads" would show workers a top-to-bottom ranking of employees based on how many accounts or documents they verified that week, sometimes every day, they said.

"Coffee is for closers!"

Their bosses told them on some occasions to resolve tickets on accounts that they believed were fake, potentially leading to false verifications. They were told it was not their job to catch fake documents, but to resolve email tickets, they said. [...]

"There were a lot of people who wrote in and were like, 'I feel like I'm being given the runaround, how can you be okay with ruining people's lives like this?' Because it was blocking their access to unemployment," one former ID.me employee told Insider. "I would have people emailing in like, 'I don't have any food to feed my children. We are about to be evicted.' And then follow ups that are like, 'I am now homeless because of this.'" [...]

With a company laptop, email representatives and video chat agents can see any piece of information about any ID.me user -- even people they never talk to. They could look up a user's email, and then find the information, documents, and selfie they submitted to ID.me, these people said. Customer service workers also described a tab on ID.me's internal dashboard that showed all potential facial recognition matches when a user submitted a selfie for verification. This was to catch possible fraudulent accounts, but these people said the system would often show profiles of clearly different people. [...]

Document reviewers were told to upload dubious verification documents to a "peer review" Slack channel. These documents, which sometimes included real personal information like passports or social security cards, were visible to anyone across the company who could access the channel, several former employees said. The files were deleted after a ruling was made, one former employee said, but Slack may keep files, even deleted files, permanently. Compromises to ID.me's Slack could also reveal all of these documents to hackers, regardless of ID.me's proprietary security protections.

As I said last time, "There are many ways to prove who I am to the State of California, and giving my biometric information to some third-party for-profit data-harvester with a Montenegro domain is not an acceptable one."