Whoever once had the address "mim@mcom.com" has a vast and extremely enthusiastic botnet trying to crack their password on mcom.com's (nonexistent) IMAP server, from 20,000+ unique IPs in the last 30 days.

Never give up hope, it might work some day!

Though I am impressed by the IP space they control, I guess.

Yesterday
The Castro Theatre is turning over control to Another Planet:

The 100-year-old theater, known throughout the world as one of the symbols of San Francisco's historic LGBTQ Castro neighborhood, will be renewed as a live events venue with music, comedy, film and more as Another Planet Entertainment takes over its programming.

The Berkeley independent [sic] concert promotion company -- which promotes hundreds of local concerts annually at venues like Berkeley's Greek Theatre, the Fox Theater in Oakland and the Bill Graham Civic Auditorium in San Francisco, as well as co-produces the Outside Lands music festival in Golden Gate Park -- has signed a long-term contract, with plans to [...] broaden the programming at the 1,400-capacity venue to include live music, comedy and community events. The Castro will still screen select films, but the changes are sure to be earthshaking for many Bay Area film organizations and movie fans who have been filling the Castro for decades.

"It's heartbreaking, devastating, and not surprising," said Marc Huestis, who has presented special events at the Castro Theatre for 40 years. [...] "Even before COVID, it was like repertory theater was kind of on its last legs," Huestis continued. "It makes me very emotional because it's just such an important cultural institution and the heartbeat of not only the neighborhood but of the city."

As a fan of both old movies and live music, one might expect me to feel conflicted about this. While losing another repertory movie theatre is awful, gaining another live music venue should be good, right? But, no, this is just another tragedy. Understandable, perhaps, but still tragic.

I don't understand how anyone gets away with calling Another Planet an "independent" company, unless your definition of "independent" is "not publicly traded". I guess NIVA defines "independent" as "anyone who is not Live Nation or AEG", but the reality is that Another Planet are the short leg of the corporate triad who monopolize the live music scene in the Bay Area and beyond.

It's true that APE is the smallest of the three, and they're "local", but they have the same business model as Live Nation and AEG: anti-competitive lock-in through vertical integration and festival radius clauses. They're still monopolists, they're just smaller.

And even though whatever kind of live music they end up doing at The Castro won't be the sort of thing that we do at DNA Lounge -- we're not a "1,400 capacity all-seated" kind of place -- this sort of corporate consolidation hurts all of us small businesses who are actually independent, because it increases APE's monopoly power.

But as with Slim's (RIP) and Mezzanine (RIP), it's hard to fault the Castro's owners for taking whatever Faustian bargain is offered. It's grim out there.

2 days ago
Now, Eternals was bad -- and I've already had some words about that -- but something I have not yet seen anyone bust on is the opening crawl.

Which is CLEARLY an, uh, homage to Blade Runner (violating the cardinal rule of cover songs, "never remind the audience of a better band they could be watching instead") but so ham-handed that it does not replicate (see what I did there?) the MOST RECOGNISABLE features of that crawl: its own bizarrely mismatched fonts!

If you're gonna goof on something, goof on it right!

It's like -- whichever intern got assigned the job of "hey pal, go fake-up a Blade Runner crawl" looked at it and was like, hmmmmm, it looks like whoever did this accidentally screwed up the fonts, while I am immitating this thing I had better correct their error."

Now you may recall that I have some Opinions about Blade Runner, but let me now turn the mic over to the eminently more qualified Typeset In The Future:

Blade Runner's opening crawl is distinctly un-futuristic in its choice of font. It uses Goudy Old Style -- designed by Frederic W. Goudy in 1915 -- as part of a veritable typographic cornucopia. Within five-and-a-bit paragraphs, we are treated to several inconsistently spaced examples of small caps), and five -- count them! -- examples of particularly chunky em dashes. (Thankfully, they do not follow the freaky American style of removing -- for no reason at all -- their surrounding spaces.)

My favorite aspects of this opening crawl, however, are the arbitrary examples of Mid-Sentence Capitalized Words, as popularized by A. A. Milne and P. L. Travers.

By the way, the Eternals Pitch Meeting is very good.

A Series of Tubes

3 days ago
This interactive map of the SF sewer system will come in handy for my next heist.

This Place is not a Place of Honor

The thing you need to understand about today's Zillow find is that it was built in 2010 in the United States of America. Two full years into the financial crisis, these people decided that what they needed was a MOAT.

It looks like the part of Disney you aren't supposed to see, like there should be dumpsters of half-consumed turkey legs and a Mickey Mouse holding his own head in his hands, chugging bottled water. [...]

It's called Chrismark Castle because... it's owned by Christopher Mark, the great-grandson of a Chicago steel tycoon. (Boostraps!)

It took seven years and $4.1 million to build, but went on sale for $45 million, now down to an affordable $35 million.

He had barely moved in w his wife and children when she filed for divorce. So he moved his pregnant girlfriend (oh) and her daughter in instead. Then SHE left him, and there was a big court case for more child support.

And here's our protagonist, eating dinner alone, too sad even to put food on his plate or light his candle.

He's been trying to sell the place since 2014. In that time, he's tried turning it into a modeling studio (uhhh), a wedding venue, and an exotic animal refuge.

During the lawsuit over child support for the girlfriend (he'd been paying $1k a month), both alleged that the other was responsible for the starvation death of a camel.

Anyway, I will leave you with the world's most uncomfortable hand chair, the fact that there is a navy fighter jet on the property, and yes there IS a dungeon (can't find pictures), and also nearby Hartford, CT has a poverty rate of over 30%.

Dear Lazyweb, why don't ICS feeds in Calendar.app ever update automatically any more? View / Refresh Calendars works, but only manually.

Quietly and over some objections, a national digital vaccine card has emerged 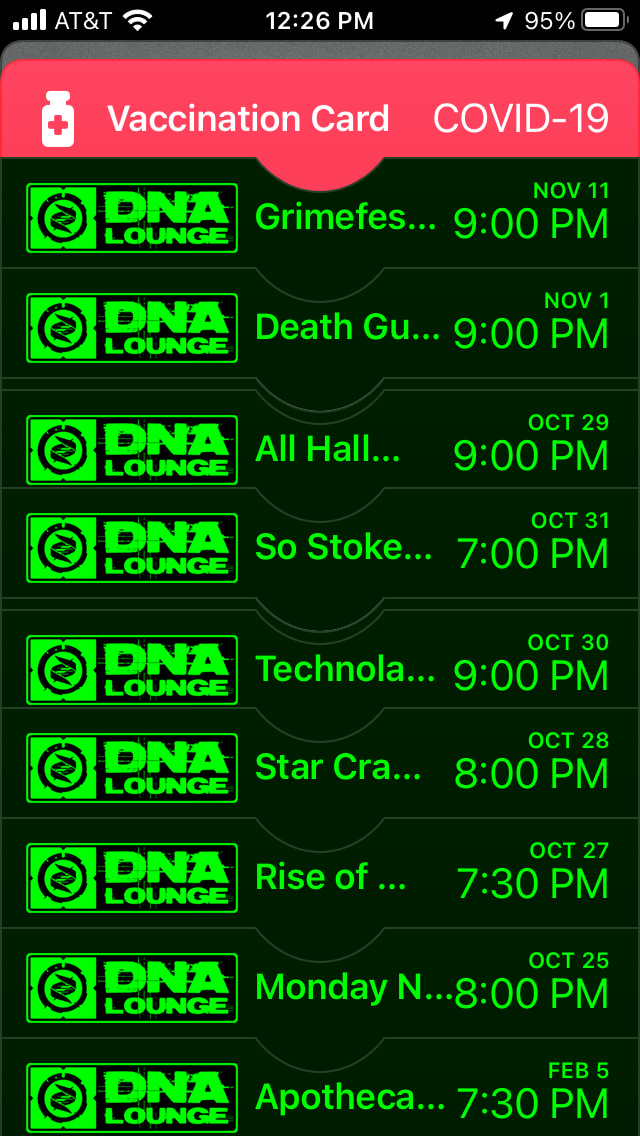 Whether they realize it or not, about 200 million people in the United States now likely have access to a Covid-19 digital vaccine card.

The fact that the system exists in any form is a triumph for a loose coalition of technologists, nonprofit groups and mostly Democratic states that championed the development of a digital vaccine card even before the first coronavirus shots were administered. [...]

In California alone, 7 million individuals have downloaded their QR code, and he estimated that about 80 percent of the vaccinated U.S. population of 247 million people have access to a SMART Health Card if they want one through either their state health authority or the site where they were vaccinated, such as a pharmacy or a hospital. [...]

But people involved in the project said it may have gone more smoothly if President Joe Biden had agreed to coordinate it. [...] Anderson said other countries haven't always known whom to speak with in the U.S. to plan cross-border systems. "They're turning to the states, they're turning to VCI, and it's a challenge for a state to conduct foreign diplomacy," he said.

"We won't be safe until venues are able to require SMART Health QR codes and stop accepting paper cards, or photos of cards. And that won't happen until state or local governments mandate that," said Jamie Zawinski, a software developer who also owns a night club, DNA Lounge, in San Francisco. He requires customers to have the QR code or, for now, their paper CDC card.

DNA Lounge not only requires people to display the QR code, but it also scans the code using a smartphone app to verify that the codes are authentic -- making the club one of the few businesses anywhere in the U.S. to take that extra step.

The primary scanning app available, the SMART Health Card Verifier App, has been used about 750,000 times this month, and the trend line indicates usage is doubling month over month, Anderson said.

7 days ago
An offal mess: 300 kilograms of animal carcass spread across a Melbourne road