How much more terrifying could the murderbots be? Waymo.

The visitors don't just come at night. They come all day, right to the end of 15th Avenue, where there's nothing else to do but make some kind of multi-point turn and head out the way they came in. Not long after that car is gone, there will be another, which will make the same turn and leave, before another car shows up and does the exact same thing. And while there are some pauses, it never really stops.

"There are some days where it can be up to 50," King says of the Waymo count. "It's literally every five minutes. And we're all working from home, so this is what we hear."

"We have talked to the drivers, who don't have much to say other than the car is programmed and they're just doing their job," King says.

"There are fleets of them driving through the neighborhood regularly," says Lewin. "And it's been going on for six, eight weeks, maybe more."

Much of the commentary I saw on this was people acting like it was some weird mystery, why would the cars glitch out like this. And an anonymous Waymo PR flack shat out some meaningless verbal diarrhea that amounted to "what we are doing is not technically illegal so you can't stop us."

But it's obvious what's happening here. Someone found a bug where these cars weren't negotiating u-turns properly, maybe even on this very street. So they added this street to the test suite, and they're going to run it again, and again, and again, until they get it right. Which is a completely normal way of debugging things when it's code on your own computer -- but is sociopathic when it's a two-ton killing machine on public streets, non-consensually involving real live humans into your process of debugging your buggy-ass software.

But here's something that might really bake your noodle. What if they aren't actually debugging code? What if this is not an edit-compile-deploy-test cycle at all. What if instead they're just training the network? What if their process is simply, "if we drive cars down this dead-end road ten thousand times, and they don't crash, we're just going to bake all of those runs into the network and call that whole 'u-turn' problem solved."

We're all going to fucking die, is what I'm getting at.

DNA Lounge: Wherein a winnar is us! 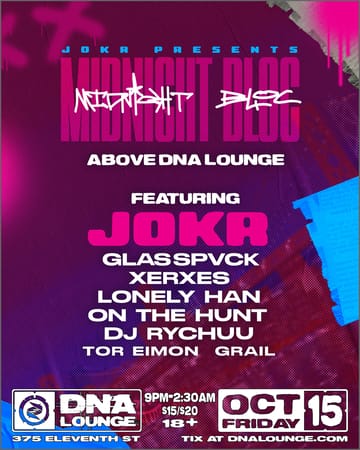 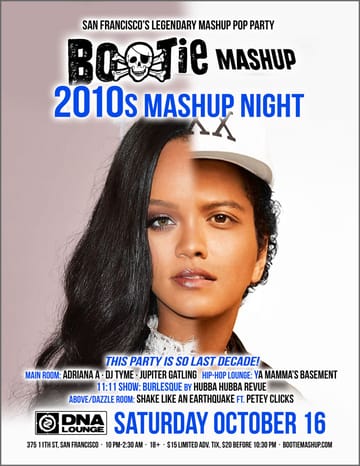 Sat: Shake Like an Earthquake
As foretold by prophecy, you the people have once again declared DNA Lounge to be "Best Nightclub", Bootie Mashup to be "Best Dance Party" and Hubba Hubba Revue to be "Best Burlesque" in the 2021 Best of the Bay.

Thank you again for your support!

If you want to see what the fuss is about, well, this is a good weekend for it! This Saturday at 7pm, Hubba Hubba Revue presents Murder Mansion!

And directly following, and every Saturday, we have Bootie Mashup, this week presenting a tribute to oldies from the 2010s.

I also strongly recommend Turbo Drive on Friday, with Night Club, One True God, and a secret special guest. It will be a great show!