1 year ago
Halloween Week is almost upon us, and as per tradition, you can get a Five Night Multipass!

This ticket admits one person to seven parties over five nights: Sequence, Star Crash, All Hallow's Eve, Booootie, Technolatry, So Stoked and Death Guild! (Note: one person, five nights. This does not get five people into one party on the same night, or any other combination.) 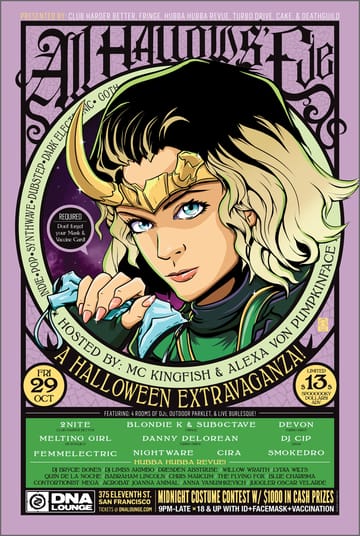 Other items of note:

Someone found shiner.mcom.com, our 1995 NNTP server, at an electronics scrapper.

As you would expect for a machine generally occupied as a news spool, various copies at various stages of the newsgroup active file are present. They include the default (example?) groups, like acl, control, junk, test and virtual, but also some slightly suspicious internal newsgroups,

Tempest is 40 years old this month

1 year ago
Here's an interview with Dave Theurer, the creator:

Tempest hardware was always a bit problematic ... one time in the lab a monitor stopped working and we looked underneath it and it had gotten so hot that four or five components had actually desoldered themselves and had fallen out from the circuit board and were lying around.

To celebrate this anniversary, my Tempest at the club stopped working again. For the past several years, I'm not sure the thing has been functional for more than six weeks in a row.

At least this time it does not seem to be a monitor problem, but a power problem, probably the AR2. That's easier to deal with but I haven't gotten around to it yet. The monitors in both Tempest and Star Wars have been pretty stable since I retrofitted them with both an LV-2000 and an Alan-1. They actually run cool to the touch now! Highly recommended.

It's such a pain in the ass to work on these now that they're at the club, though, since I have no reasonable workspace there. That means that to give them any real attention, I need to scoop out the insides and schlep it all home, which means pulling not only the boards and the very heavy power supply, but also the wiring harness, which is like 20' long and screwed in to the cabinet at dozens of points. Those harnesses are custom for each game, and "spare Tempest wiring harness" is not something I've been able to find on eBay...

Pac-Man is also acting up. Sometimes it boots into Matrix crash mode again, and usually kicking it fixes it, but not always. There's this 4" square daughter board on it that seems to have a loose connection on its socket or something. I re-soldered it but that didn't help. What seemed to work was rolling up a lump of electrical tape and jamming it underneath it so that there's some pressure on the right side. And, of course that works about as well as you'd expect in the face of relentless subwoofers.

In summary, arcade games are a land of contrasts.