DNA Lounge: Wherein I do some timeline math 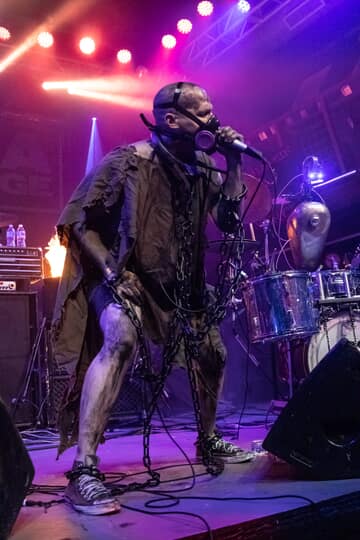 Captured! By Robots demonstrate proper masking technique.
Attendance is still way down, and that seems to be city-wide, not just us.

There have also been a lot of "lineup changes" due to DJs and bands being unvaccinated -- again, not just us: whole tours being cancelled because now they can't play in California. Several times we've had an email exchange with an agent: "Everyone's vaccinated, right?" A week of silence. "Everyone's vaccinated, right?" And repeat. Then the day before the show, "Soooo, it turns out..."

But as for attendees: our impression has been that most of our unvaccinated customers were not horse-paste MAGA lunatics, but were merely lazy and inconsiderate. They didn't particularly oppose getting vaccinated, they just hadn't bothered. But once it inconvenienced them personally, suddenly they were really interested in getting that shot.

A full year of lockdown, six months of wide vaccine availability, and almost 700,000 dead in the US alone didn't do it, but not being able to go see a DJ was the final straw. Ok, I'll take it.

So if these folks only made their first vaccination appointment after they were denied entry to a bar, how long until they're fully vaccinated and we can take their money again?

If you get one of the two-shot vaccinations, you need three or four weeks between shots, and you are not fully vaccinated for two more weeks. J&J is two weeks total, but most vaccination sites are using the two shot versions.

So if these folks first got turned away at the door on the weekend of July 30th, and got their first shot that week, they'll be fully vaccinated by the weekend of September 17th.

But maybe they first got turned away from a club on Aug 20th instead, and then it most likely took them another week or two before they decided that this was not a fluke and they really did need to take care of their problem if they ever wanted to party again. That puts us at October 1st.

So we've got at least another month of this crap to put up with.

On a related note, I've been hearing persistent anecdotes that many SF bars are clubs are being extremely lax about checking vaccination status, and that several of the larger dance clubs aren't checking at all. To those people I say: shame on you. Do you not want this to be over??

As far as indoor-masking compliance, people have been getting a lot better about it. We still constantly have to nag them, though. Unsurprisingly, mask compliance at So Stoked is pretty much 100% (it was a part of the raver costume already). At the dubstep parties it's a lot lower, and at Bootie it's like "Mask? What is mask, I have not heard this word." We're getting there, though.