DNA Lounge: Wherein the antivaxxers are still trying to make this nightmare last as long as possible for all of us. 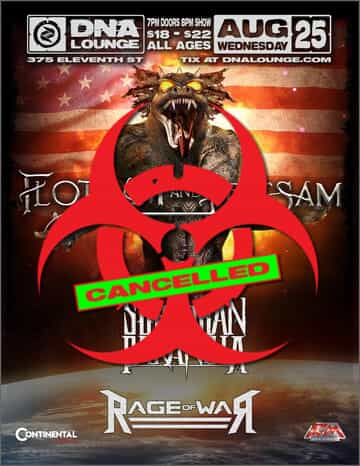 We had a show booked for next week with Flotsam and Jetsam, Suburban Paranoia and Rage of War, and then we learn that several members of Flotsam and Jetsam are unvaccinated. That's right, they are on tour, traveling through who-knows-what COVID-19 hotspot hellholes, and they're not vaccinated.

But wait, the story gets stupider.

We ask their agent, "So, are they planning on getting vaccinated?" He says he's not sure. Which means we can't even reschedule the show for a later date when they have their shit together, we have to just cancel. Great.

So then after cancelling, we also learn that one of the members of Suburban Paranoia was unvaccinated "because his doctor recommended against it". Uh huh.

Meanwhile, support act Rage of War was talking shit about their own show on Facebook, saying that our vax policy was going to "kill the turnout" and that "at least people will 'feel' safe..... right lmfao"

Now one of the members of Rage of War has been hospitalized with COVID-19.

In the Before Times I probably would have been feeling some kind of schadenfreude about this, but I don't. It's just tragic and sad and stupid and completely avoidable and I want it to stop!

If you want to feel terrible about the state of the world, just read the comments on this Blabbermouth article about the cancellation. Apparently it's a "poison jab" and we're "commie libturds" when we're not "nazis". Good to know that that the metal community still has that same old MAGA problem. Good job everybody.

We have another metal show coming up tomorrow, with Lich King, and as far as I know, everyone involved is vaccinated. So, fingers crossed on that. But that's only after we had to kick Helsott off of that bill for being unvaccinated. They tell us that their name means "Fatal Illness" in Old Norse, and while I appreciate their commitment to the bit -- guys, you're taking it too far.

By the way, before you comment here telling me to "do my own research" about drinking bleach or whatever, let me remind you that as of yesterday it is the law that all customers, performers and staff be vaccinated.

That had already been our policy for some time. It just took the law a while to catch up. But at least now I get to stop arguing about it.