Just two more weeks until I can get back to licking doorknobs!

4 weeks ago
Shout out to Cartographers for Social Equality.

DNA Lounge: Wherein we need you to floor it.

4 weeks ago
Yesterday the Mayor's Office announced that the Entertainment Relief Fund will be getting a $3M endowment, which sounds great until you do the math. If they were to divide that among all of SF's nightclubs, I think that would keep all of us alive for like, 3 or 4 weeks.

Their plan of record for getting money into this fund is still "maybe a friendly billionaire will step up", so don't hold your breath on that. And the Federal "Save Our Stages" fund has still distributed $0.

So with no money to speak of, and still no plan for distributing it, San Francisco's financial support for nightlife is still very much in the "thoughts and prayers" category.

However! Vaccines have actually been happening!

Last week we had a meeting talking through some re-opening scenarios. Like, once we get word from the Government that we're allowed to re-open, how much notice do we think they'll give us? Based on past experience, we're guessing six days. So what's our plan on re-staffing on such short notice? And what if they tell us we can only run at 10% capacity or something? Do we just ignore that and stay closed? Or try to do... something... that won't pay the bills but might be juuuust slightly better than being dark?

Anyway, it's all pretty bleak, but at the same time kind of exciting to be acknowledging the idea that this might actually be over some day, and we might actually have a business again, even if we have no real guess as to when that might be.

Since it's possible that we might be open again in... let's say, months rather than years? Let me just throw this long-shot idea out there one last time... 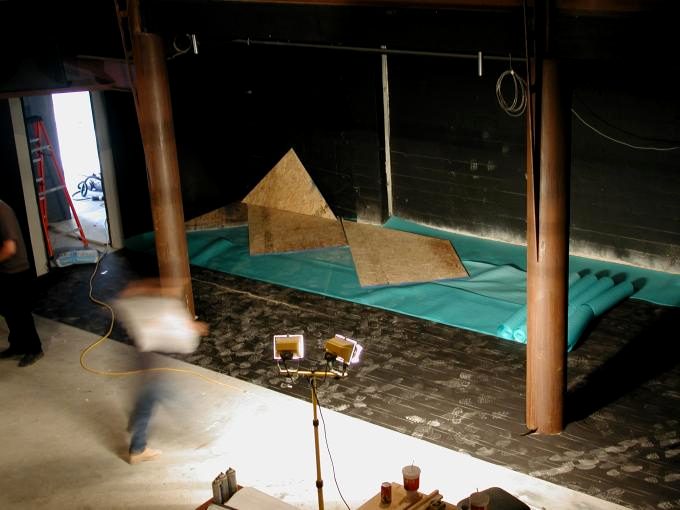 How would you like to buy us a new dance floor?

Tearing up and replacing the dance floor is a multi-week process. In the Before Times there never would have been a time when it would have been practical for us to be closed for that long. That means that there is literally no better time to do it than right now, except for the fact that we don't have any money. It would be a shame to let this downtime go to waste, but that's what we're gonna do, unless a noble benefactor appears.

When we installed this floor over 20 years ago, it was a festive pancake of neoprene and plywood over a concrete base, but all that dancin' in the intervening decades has left it no longer springy, not to mention the hundreds of layers of paint atop the now-splintering and divotted plywood... And the need for re-painting only becomes more frequent as the plywood further frays. Really, it's time.

So, wanna buy us a dance floor? It'll probably only cost fifteen or twenty grand. Think of the bragging rights! The nobility of being the one who saved the orphanage. Hell, we'll give you a plaque if you want.

Hang this up in your time machine