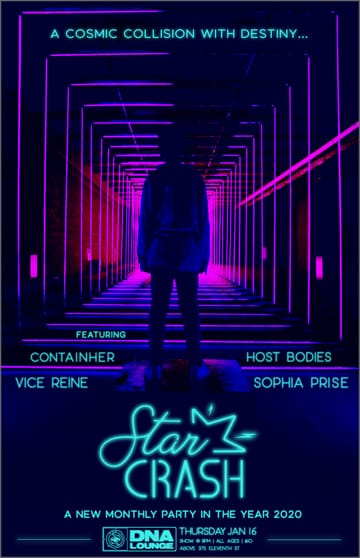 We have a new monthly live synthpop event starting tomorrow called Star Crash. it promises to be a good time, and the opening lineup is great! Here's what they have to say for themselves:

Announcing STARCRASH: a new monthly party, every Third Thursday in 2020 at DNA Lounge, starting January 16. It will feature live performances by established & emerging musicians from the Bay Area & beyond in an array of electronic genres including synthpop, indie dance, indie pop, synthwave, electroclash, chillwave, and more.

Influenced by cult/sci-fi cinema, Starcrash will be a ritzy, glitzy affair bringing campy, over-the-top futuristic glamour to one of SF's most beloved night clubs, DNA Lounge. Starcrash seeks to bring together & build on the existing synth music community, elevate local artists, and give real-world context to music that exists increasingly adrift in a digital world of streaming & social algorithms.

Starcrash is led by booker/promoter Remi X. DeVice (frontwoman of SF-based synthpop trio Vice Reine) along with April Gee (Containher, Synthesthesia, the Labyrinth Ball) & Leanne Kelly (New Spell). Remi X. says of the inspiration for Starcrash: "We want to unite local synth musicians and music lovers in a beautiful club every month as we create our own "cinematic universe". Starcrash is about pushing forward to create the world we want to see... to a future that isn't terrible... or at least having a hell of a party as it all goes down."

Get your tickets now! You can also win tickets at Do The Bay. It's at #4 on their list right now, so give it an up-vote, won't you? 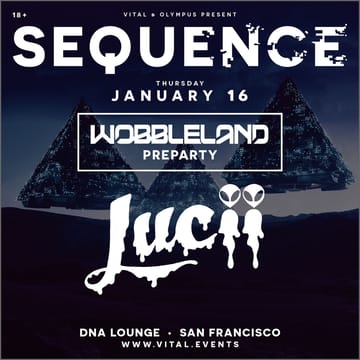 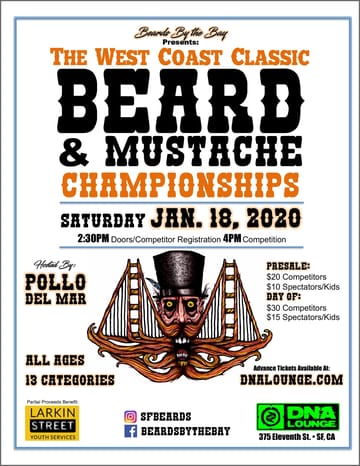 This week we also have three official Wobbleland pre- and after-parties, on Thursday, Friday, and Saturday, if the wubbity wubbity wubwubwubstep is more your jam. Secret line-ups to be announced late on the day of each show. (Ticket prices will be going up...)

And also this Saturday afternoon, we're hosting the West Coast Classic Beard & Mustache Championship. It's like a hair show, but from the nose down! This should be quite a thing to see.

I must share this video of, as Boing Boing put it, "Magnificent steel toilet flushes forty golf balls with ease." Turn the sound up, you won't be disappointed. This looks to be the same model as our toilets; if not, it's the same design.

HOWEVER, I can tell you for sure that these feats of plumbing excellence have little to do with the toilet: it's all about the drains. Toilets, like the Internet, are a Series of Tubes.

People give our toilets a lot of shit, but let me remind you that they are all twenty years old and they all still work! That's really quite impressive. These days you're not likely to find any appliance with that kind of stamina. Or even one that won't gleefully sell you out to a Moldovan botnet.

3 years ago
I just received this email from Apple, in response to a bug that I reported against Xcode 2.2 in 2006. That's fourteen years.

Thank you for your feedback.

There have been many changes in Apple platforms since this was filed. If your feedback is still relevant to current software, please update this feedback with recent diagnostics, sample code and screenshots, as appropriate. Otherwise, please close your feedback.

Do not reply to this email. Please login to Feedback Assistant to view this request.