Remember that bill to extend alcohol service hours in select California cities, once a dream of former State Senator Mark Leno, and more recently taken up multiple times by State Senator Scott Wiener? Well it's back alive, and there's a new governor in office who might not veto it.

Wiener's bill cleared the Senate with bipartisan support last year, only to get vetoed last September by Governor Jerry Brown. Not thought of as a conservative in any demonstrable ways, the elder statesman Brown sided with the CHP in the end, saying at the time, "California's laws regulating late night drinking have been on the books since 1913. I believe we have enough mischief from midnight to 2 without adding two more hours of mayhem."

I'll just cut-and-paste from my previous post on this from December, and update my timeline:

This bill would allow SF the option of issuing additional permits -- expensive permits -- to a handful of venues, allowing those venues and only those venues to serve alcohol between the hours of 2AM and 4AM, as part of a 5-year-limited trial program, to begin "no earlier than Jan 1, 2022".

So it will be good for those businesses who get to be a part of that program -- and, assuming we haven't gone out of business by then, we're going to do our damnedest to be a part of that program -- but it's not really going to change the character of SF nightlife in any significant way. Almost all bars will still close at 2, and you still won't be able to get anywhere by public transit after midnight.

I mean, at this rate we might have a Central Subway or a Transit Center before you can legally have a drink at 3AM.

Here's a brief recap of this ongoing shitshow. I can't believe how long I've been blogging about this:

"Campaign security is a wood chipper for your hopes and dreams"

What I Learned Trying To Secure Congressional Campaigns

I traveled the country like Johnny Yubikey, distributing little blue security tokens from a sack. [...] I don't believe I accomplished much, but I made so many friends along the way! And I learned a lot about the idiosyncratic world of Congressional campaigns; knowledge that I want to now hand over to you, the next person willing to take a swing at this piñata of futility. [...]

Practical campaign security is a wood chipper for your hopes and dreams. It sits at the intersection of 19 kinds of status quo, each more odious than the last. You have to accept the fact that computers are broken, software is terrible, campaign finance is evil, the political parties are inept, the DCCC exists, politics is full of parasites, tech companies are run by arrogant man-children, and so on. [...]

Offering security training is like being a dentist offering a teeth cleaning. Everyone understands in the abstract that this is something they need. They feel guilty about putting it off. Maybe if you are really persuasive and can talk in scary terms about gum disease, they will agree to do it. But they will not enjoy it, and however much they promise, they are never going to floss. (Also in this analogy the dentist isn't a real dentist, but some guy who runs a bedbug website.)

Hi, welcome to my TED talk 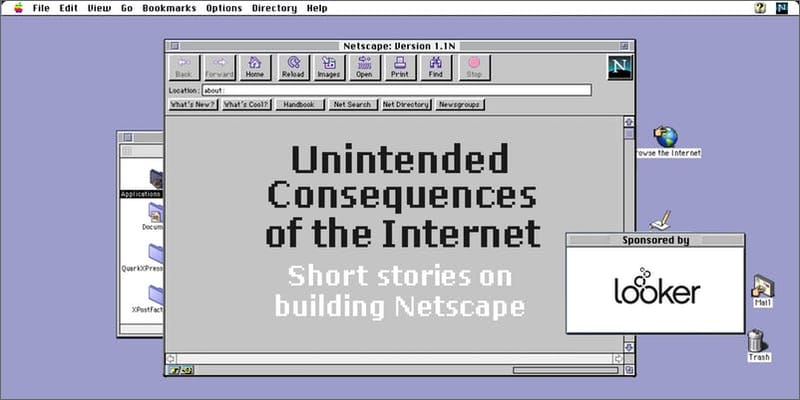 Last night we got the band back together and told some stories about Netscape. Give it a listen. It all starts at around 7:01:00.

Huge thanks to Lloyd and the Looker team for making this happen, everyone who told their stories, and everyone who came out. I had a great time!