In honor of this joyous occasion, I'll tell you some sad stories about finances.

Codeword closed at the end of July, which means that August was the first month in which we didn't have to pay rent over there or otherwise subsidize that operation. Our bookkeepers finalized the August books last week, and guess what, we managed to lose $60,000 that month anyway!

How are we still so fucked? I have no idea.

Well, the answer is "not enough people are showing up", but I don't know what to do about it.

And now that Halloween weekend is over, we enter the Dark Times. Our business always drops precipitously between Halloween and New Year's Eve. Basically we can only count on those two "good" weekends from November through January. People just don't go out.

Some venues manage to make up the end-of-year slump by getting a bunch of corporate holiday parties. We've never managed to do that effectively. We typically only book a couple of them. Hey, want do you your company party here? That would be awesome... 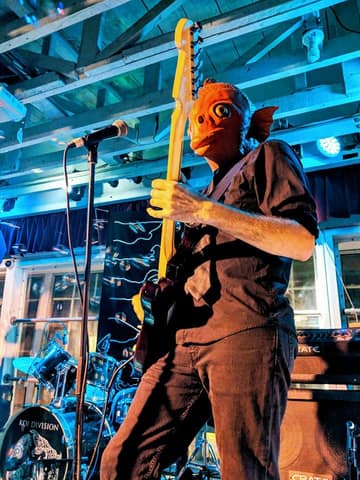 The Koi Division show was fantastic, though. They were both funny and a very good band!

Remember last month when we had that $6,000 plumbing incident with the jackhammers? Well last week, our Soundweb died again. Soundweb is the digital audio processing system that runs the whole sound system back-end. The product has been out of production for years, so we've been living off of eBay'ed spare parts for quite some time. That trick isn't really working any more, so now we have to upgrade to the new thing in a hurry. That cost about $3,000. And then mere days later, our live sound board died. The replacement for that is about $4,000.

And look at that, suddenly that's $13,000 of "emergency" repairs in a single four week period.

We should spin this as "look at all these great sound system upgrades that we've done!" but really it's, "look at all this crap that broke that we absoutely cannot afford to replace right now, except that if we don't, we can't open the doors!"

So, if you felt like joining our Patreon, or making a big-ol' year-end donation, we sure could use the help!

Also we're still trying to sell our two broken espresso machines, in the hope of using that money to buy one working one -- meaning our cafe still has no espresso drinks. Nobody is biting on the sale so far, though. Here's the eBay listing; pass it on if you know someone in the market for one. Fun fact: espresso machines cost more than mixing consoles.

We did manage to find a buyer for the Codeword liquor license, hooray! But that's contingent on ABC paperwork, so it will probably be more than six months before we see that money.

"How are pizza deliveries going?" I will now pretend that you asked. Not great. Even though we've had online ordering and late-night delivery up and running again for a few months now, our delivery business is down 75% compared to this time last year. Now, our delivery business has always been a relatively small part of the restaurant's overall revenue, but we're still talking about thousands of dollars per month. It's hard to guess why that business hasn't returned.

Possibly it's because Eat24 has the lion's share of the market, and since we can't use them for ordering any more, none of their customers manage to find us? The sites we are using are GrubHub (they are the more popular service, but they only deliver until 11pm); Postmates (they deliver 24 hours!) and DoorDash. (they deliver until 5am).

As far as we can tell, the only other sites that actually do deliveries (rather than taking orders only) are caviar.com and waiter.com but both of them seem to be ignoring us.

Oh, I understand that the Codeword space is now going to be... a sports bar.