"Is it still there?"

The sample in this cracks me up every time...

I feel like more than a sequel, it was an extended fan tribute, made by people who, as a committee, didn't really understand the first movie.

They hit a lot of bullet points. I can almost see in my head the planning meeting where the list was made: it's not really an action movie. Slow burn. A wooden, silent protagonist who follows the linear clues from A to B to C. Long, slow pans across the cityscape. Monologuing supervillain industrialist. But despite hitting all of those seemingly-compulsory parts of the routine, it falls flat. Much like how the Watchmen movie, despite being nearly a frame-for-frame remake of the comic, still fell so flat.

It is so chock-full of fan service and references to other things that they mute what few new things it did bring to the party. "Here are some things that were in the first movie! Remember those?? Hey, remember how the first movie had neon signs for Pan Am and Cuisinart, before they went out of business? Look, here they are again! It's a thing that you recognize! Do you recognize the thing??"

There is a scene in the second or third act where some people are listening to a recording of Decard's Voight-Kampff session with Rachel from the first movie, and two of the characters start discussing what it means. Wait, excuse me, did the screenwriter just turn toward the camera and tell me his interpretation of the dialog in an older, better movie? Yes. Yes he did. What the hell? This script is not your blog, pal. I am not sitting on the couch TV Yelling with you!

Even the score felt like it was making winking references. "Hey, remember this cue from Vangelis?"

Now, to their credit, they did make a long, slow detective movie, which is what the original was. To do that at all today is kind of remarkable.

But, by and large, everything that was good in this movie reminded me of other, better movies. And mostly those movies were not the movie to which this one is a sequel!

First off, Ryan Gosling is just a really boring actor. This role could have been literally anyone, since he sleepwalks through the movie. Much of that is on the writing, but his flat affect made it difficult for me to care about any of the problems he was trying to solve, since he barely seemed engaged in it at all. And when he went "off book", it was hard to understand why, since he didn't seem to genuinely care about anything.

Next, Jared Leto. Jared Leto ruins everything! What a complete tool. This scenery-chewing buffoon is what we get to replace Joe Turkel's masterful Eldon Tyrell? Please. I read somewhere that originally they had wanted David Bowie to play this part. My question is, how far down that list did they have to go?? How many people said no? How many hundreds of names do you have to cross off below David Fucking Bowie before you get to Leto? Did Will Ferrell and Carrot-Top turn them down?

As for things that pulled me right out of the story, why is Leto's character blind? Dude you literally own an eyeball factory. I assume that it's just a stupid affectation that his character adopts, because he is a tool.

The relationship between the replicant and his chatbot was interesting, though they certainly didn't explore any of the implications. He's someone's property, she's his property, shit rolls down hill. It's almost like there's a story there about autonomy, inter-species romance, or a love story between two people who are somewhere between "poorly socialized" and "not quite real". Oh wait, that movie was called Her and it was excellent!

Every time someone in the movie (like the hooker dressed as Pris for some reason) used the phrase "Real Girl" or "Real Boy" it was immediately about Pinocchio, and I get it, I get it, you're a writer, a hack writer, and if your script is about the nature of humanity you can't resist throwing in a Pinocchio reference. But A.i. really, really has that covered. I didn't even like A.i., but it should have closed the book on this Pinocchio trope.

There's a scene toward the end where Jared Leto is trying to play the devil and offer Deckard some capital-T temptation where they trot out a CGI Sean Young lookalike for him to play with. (And in this scene I kept thinking, "Wow, Leto is a terrible Satan, hey, I should totally re-watch Angel Heart, that was some quality Devil-ing!) It's no surprise that she wasn't invited back for this movie. You've probably heard stories about "crazy" Sean Young, but I suspect that's all bullshit, she's just someone who had a few bad breaks and dropped out of that misogynistic meat-grinder of an industry. (Here's an interview from a few years back, where it is clear that the field in which she grows her fucks is barren.)

Robin Wright as Rachel and Jared Leto as Dong-Fish.
Anyway, they trot out CGI Young Hotness and I'm again pulled out of the story thinking, "Yup, I guess they're not going to give her a real cameo. I wonder how much she got paid for them skinning a video game avatar with her old publicity photos? I wonder if she made bank, or if she got screwed on this deal because someone else owns her likeness?"

Oh wait, I've seen this movie too! It was called The Congress, and it is about Robin Wright -- who is also in this movie -- playing herself and selling off the likeness rights to her younger, more financially viable image, to act in future movies without her involvement. I've got to believe that when Wright learned about this scene being in this movie she went, "Wait, what?"

The original Blade Runner had three main characters: Rick Deckard, The City of Los Angeles 2019, and Roy Batty. Everyone else was supporting cast. It's nice that they brought The City back for a cameo, but it was a shadow of what it once was, and honestly, it's done better work in other movies.

(Actually that's true for any of the many incarnations of Ghost in the Shell.) Can you look at the skyscraper-sized purple-haired naked hologram in Blade Runner 2049 and not think, "They lifted that directly from Ghost in the Shell 2017"?

When we take a road trip out of LA to Vegas, we learn that before the city was abandoned, all of its gaudy statuary had been replaced with gargantuan reproductions of the statues from The Korova Milk Bar from A Clockwork Orange. Really? That's all you got?

Overall, the various environmental imagery was... good... but not good enough. Stop reminding me of other, better movies that I'd rather be watching instead!

Hey, remember that scene where Jared Leto decants a full grown and terrified woman from a Ziploc® bag, while making some speech about how his "angels" need to be able to breed and reproduce sexually in order to fill the universe? (This theology is as confused as the science, but moving on.) So this naked sticky woman falls out of the bag and he somehow immediately knows that she is infertile (presumably by sniffing her vag? I guess since he's "blind" he's "Matt Murdock, Ob-Gyn" now?) Right so he lets her be born, wake up, and then he straight-up murders her. How does that make any sense for the plot, or the character, or the world-building? How is this anything but the writer saying, "I'd like to see a nameless, naked crying woman get a knife to the uterus, that would be rad!"

Which brings us to: how does the goal of breeding replicants sexually make any kind of sense? If what you're after is a putatively-subhuman slave caste, decanting them from the Baby Grobags™ as fully grown, pre-brainwashed adults is way more efficient, especially if you've eliminated the accelerated decrepitude, which they clearly did long ago.

Which brings us to: "It's All About Family". Sigh, again? Why does every movie these days have to be about babies? Must every movie preach at the audience that you're nothing if you don't breed? Is someone subsidizing this, the way the Pentagon spends tax money to pay football teams to put on military tributes in their half-time shows? Is it the Big Baby Lobby?

(That question is rhetorical; the answer is, because Hollywood mandates that All Movies Must Be About Family, because it's still 1958 and that's the only way to get Ward and June to head out to the cinema along with Wally and The Beaver. But knowing doesn't make it any less irksome.)

I have a friend with an infant. He doesn't get out much these days, so he has to pick his movie outings carefully. I warned him against this one. He said, "Well, I'm going to go see it anyway. But I'm boycotting it if they pull some shit like Deckard is Gosling's father."

He said, "Wait, what? Jared Leto is in this movie? Are you just fucking with me now?"

One of the greatest things about the original Blade Runner, that made it endure, is that there was so much in it that was hinted at and left unexplained. And I don't even mean "Is he or isn't he". That movie gave us a glimpse into a vast world and left so many questions open not just about the environment and society but also the huge cast of characters and their backstories and motivations. It set up lots of questions, and then didn't answer most of them! It left you with so much more to think about and talk about for decades afterward.

This movie wraps everything up in a neat little bow. There's nothing left over. It is all explained to you. There is no mystery left. Except of course they left a hook for a sequel.

Blade Runner is one of my favorite movies of all time. Blade Runner 2049 just left me feeling sad. Not even angry, just sad. They had everything: the set-up, returning actors from the original, all the money in the world, and even an otherwise-decent director. And they somehow managed to squander it.

DNA Lounge: Wherein we are your one-stop shop for the 5 day Halloween weekend!

4 years ago
Here at DNA Lounge, we take Halloween very seriously. Very seriously indeed. If you are spending any evening this weekend anywhere but here, I sincerely believe you are making a mistake. Allow me to direct you to our fantastic lineup: 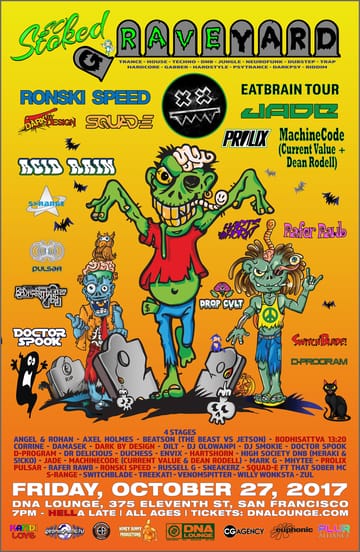 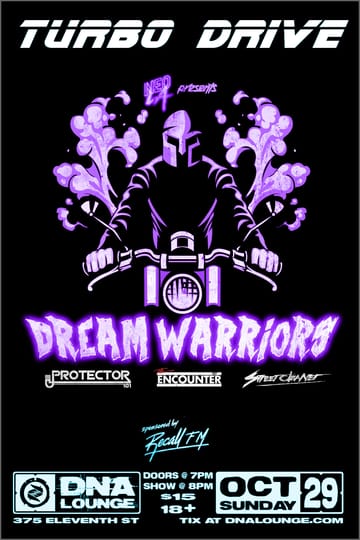 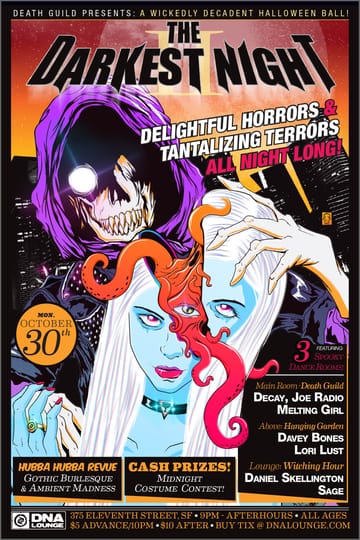 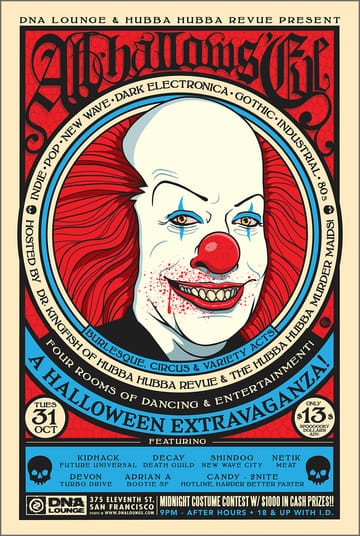 Buy your tickets now and skip the line!

Remember, people. It's a marathon, not a sprint. It's going to be a real... death-march... for your liver, your feet and your costumes, but you can make it all the way until Tuesday! We know you can! We believe in you!

In related news, the 2017 SF Bay Guardian Best of the Bay is out, and we won again! Thank you all!

Thong-Clad Driver Was Covered In Vaseline

Deputy Beebe made contact with a nearly naked white male driver sitting in the driver's seat.

Sgt. Niles arrived on scene and carefully completed a vehicle inventory. Sgt. Niles was advised that the driver's area in the vehicle was extremely greasy due to the Vaseline.