You should contribute to this because I very much want to be able to see Shriekback live again, thx.

Releasing Shriekback as a live animal after a quarter century of strictly studio-based captivity is no small thing. To deliver what we want to give and, more importantly, what you want and deserve to hear and see, no corners can be cut. If we say so ourselves, we have a huge amount of material that means a lot to a lot of people and, on stage, we have a lot of history and expectation to live up to. For years now we've fielded requests to play live again, but for various reasons, whether financial or related to the availability of the core members, the ducks haven't been in a row: now they are. With some help from you, of course.

Since Barry, Martyn and myself have re-established our relationship in the studio -- and found it as thrilling as ever -- it seems the right time to put that chemistry back on the road. But unlike the world of recording, where technology has made everything cheaper, smaller and faster, the stage lights are as cruel and unblinking as ever and the journey into the glare even longer and more expensive. So, without further shoe-shuffling, this is what we need.

The band will need to deliver all the force and nuance of a very diverse catalogue. We have lined up (ahem) an 8-piece unit that we know can hit every mark. Martyn, Barry and myself will be entwined with Steve Halliwell on guitar and keyboards and Mike Cozzi on guitar, with the Partridge sisters, Wendy and Sarah, on vocals. As Barry explained in the video, we can't give you Dave Allen, but we're delighted to announce that we'll be joined by Scott Firth on bass - Scott comes to us from P.i.L and has played with Martyn extensively on other projects, so we know we know The Groove will be just fine.

Eight people means a lot of equipment, rehearsal, transportation, accommodation and everything else -- but if we're doing this we're doing it right and we're doing it big. Setting this up, getting it rolling from a standing start, is by far the biggest ask of this appeal. Once the machine is built and fired up we can take it anywhere - and you will very much have a say in where that might be. Given the cost and effort of the start-up, we are committed to touring for a year from when we roll; this, we believe, will give us the opportunity to visit you all, wherever you are.

You know that TV in DNA Pizza that displays flyers of our upcoming events? I tried to add a stock-ticker-like crawl to the bottom of it to give a shout-out to our (public) Patreon supporters, but it's only getting about 2 frames per second. That display is actually just a web page running Javascript that is running on a "Chrome TV" box, which is a cheap-assed computer running Android, the Google equivalent of Apple TV. We're using a Keedox Amlogic s802, 2GKz quad core, which even seems to have a reasonable GPU in it, but no web browser can keep up with this animation without stuttering.

So it's probably time to just stop wasting my time goofing around with these toy computers and just put a real computer behind it. That sounds like overkill, but I guess it's not overkill if it's the only thing that will actually work.

Now that construction of the wider sidewalk is finally done, nine months after they told us it would be, it's time to figure out how to re-install our parklet.

Because of the new constraints, instead of being L-shaped and sitting at the curb, it now needs to be a straight bar with seating on both sides going down the middle of the sidewalk. And it will be smaller by about 9'. We will have to cut off the short leg of the L, plus about 3' on one end, but it will allow seating and standing on both sides instead of just one, so something like this: 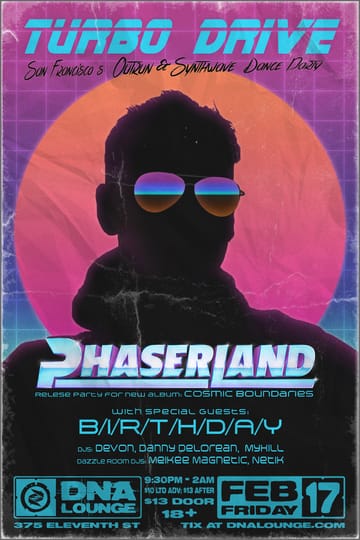 The sad news is, it's probably going to cost over $3,000 to re-install it. There's a lot of cutting and welding involved. That's a lot less than the $10k+ it took us to build it the last time, but this is not really the time to be spending a bunch of money.

Maybe we should do a second Kickstarter for it?

Please come to Turbo Drive tonight. If you enjoyed the cyberpunk dystopia we called Cyberdelia, you will probably enjoy this as well.

Some Guy: "I was going to buy a ticket, but it's raaaaaining."

Don't be that guy.