DNA Lounge: Wherein our parklet is as nervous as a cat in a room full of rocking chairs.

6 years ago
So, one of these days, they're going to widen our sidewalk. This is a part of the "9 San Bruno Rapid Project", which is a miles-long project involving adding bulb-outs and relocating bus stops and so on. Barry has been attending meetings about this since 2014, I think. To make these things happen, the city bureaucrats prefer to have "neighborhood engagement", so Barry goes to these meetings and says things like, "We fully support this plan, so long as it involves a protected bike lane, no reduction in bicycle parking, and we get to keep our parklet."

Well, we're never getting a protected bike lane, they're almost certainly going to decimate our bicycle parking, and the parklet... has The Fear.

There are two phases to this: widen the sidewalk; then replace all of the junk that goes on top of the sidewalk. That first part, widening the sidewalk, is happening "soon", and the second part -- where all the junk goes, like the bus stop shelter -- is apparently still up in the air.

Here's a photo they've been passing around: 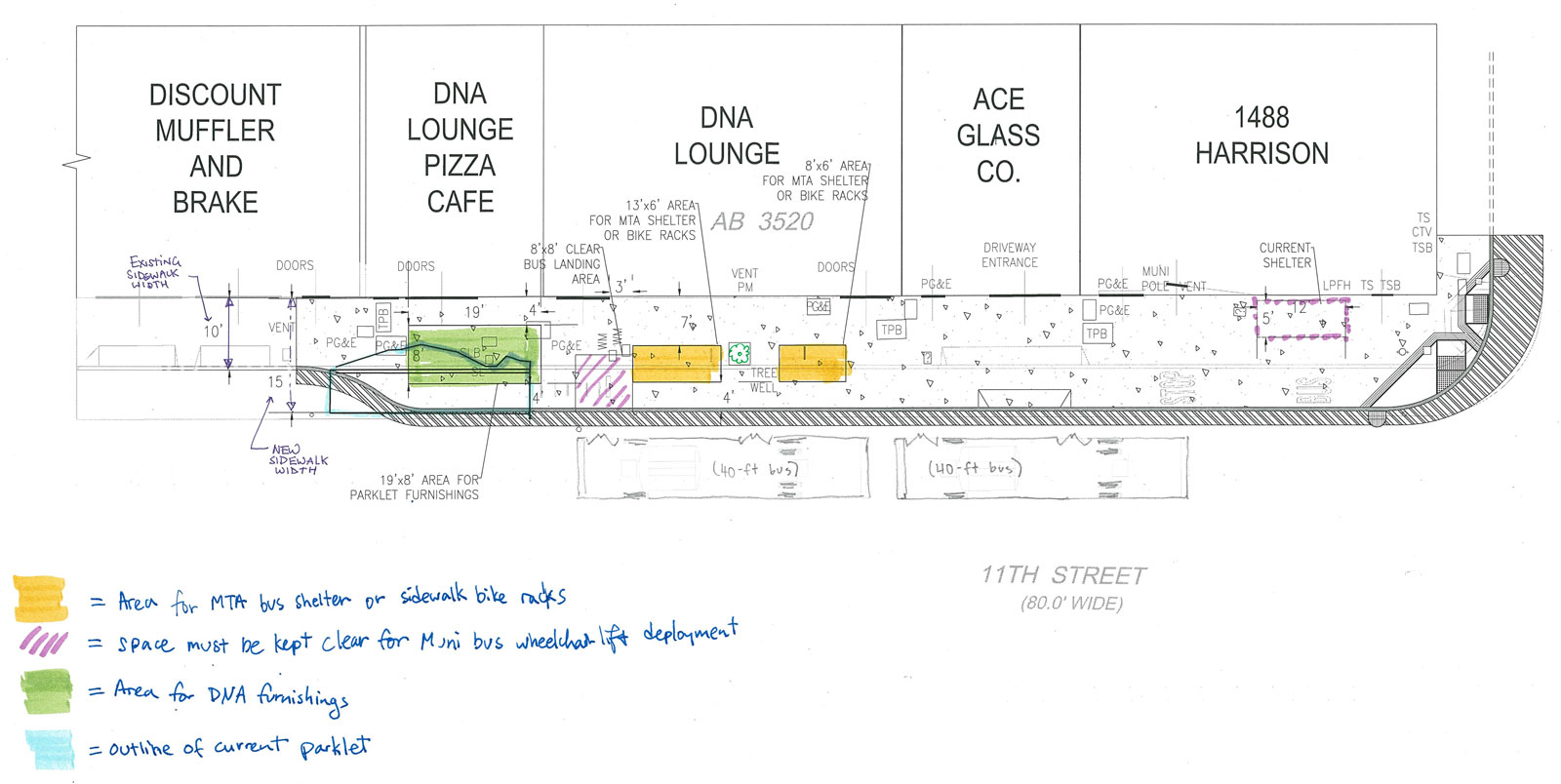 Widening the sidewalk entails removing all of the on-street parking spaces between DNA Pizza and Harrison Street, and making that be sidewalk. The bike lane (such as it is) will remain in the same spot, it will just be right next to the curb instead of next to parked cars.

And by "bike lane" I mean "the part of the road that the city has graciously provided for Uber and UPS to park in."

Since our parklet is currently sitting on the street, they tell us we need to remove it so that they can put a sidewalk under it. And once they've done that, "maybe" we can put it back and "maybe" it can be the same size as it was before.

You can imagine how pleased I am about that "maybe".

Trying to get a straight answer on even the process to turn that "maybe" into a "yes" has so far remained impossible.

So let's say it's a "yes". Then I have questions like: what is the latest date that construction might start on our block, and what is the earliest date on which it will definitely be complete? Because I'd like to minimize the time we don't have a parklet, obviously. So far, the closest thing to an answer on that we've gotten is: the contractor is starting work "soon", and the whole 9 San Bruno project "should" take 7 months. Which, you may note, is not actually an answer at all. Unless you choose to interpret that as "you have to put your parklet in a storage unit for 7+ months, because some time in that period, there will be 5 days of work on your block." I do not choose to interpret it that way, because that's, what's the word I'm looking for, insane.

When we installed the parklet back in 2013, we had approval to put bicycle parking next to it, but getting the city to come out and actually do that was going to take literally months, so we gave up on waiting and just bought bike racks and installed them ourselves. MTA has been pissed about this ever since, because they say our bike racks are too close together, and that there shouldn't be any bike racks on the sidewalk itself. So if they had their way, they would replace our 5 street racks and 2 sidewalk racks with just 3 street racks, since they say that's all that there is room for. Well, since our racks are full pretty much all the time, with 2 or more bikes on each rack, Reality disagrees with them: In late 2014, MTA was this close to telling us, "you have to tear those out because we're about to install approved, and far-fewer, bike racks", but then this 9 San Bruno project was approved, which changes everything, so they temporarily (and by temporarily I mean three years) dropped their plan to destroy our bicycle parking. See? Sometimes the molasses-like progress of bureaucracy can work in your favor!

Can you imagine what a clusterfuck it would be if there was a bus shelter two feet to the right of DNA Lounge's front door? The sidewalk would be basically impassible. The shelter would be full of people just loitering all the time. It would be a disaster for our customers and the people just trying to get on a bus.

Oh, but the part that would really make my head explode? All of San Francisco's new bus shelters have a six foot tall video screen on them running ads! Visualize fucking ClearChannel advertising fucking McDonald's two feet from my front door. Visualize it and weep.