"Tetris has taught me that your mistakes pile up and your accomplishments disappear."

Me and my brother spent pretty much all day doing these! [It rained the other day so we have a clean drive!] Yeah, that's a different human transmutation circle. And it is a bigger one too! About 3m across and 10m all the way around. I wanted to do something more complicated... But i only found one that was harder, and it would have used billions of pieces of chalk! So yeah, i stuck to these. Phew~

These are the other ones:

Interview with the director of the "Kiss" video

It is one of the finest music videos of all time.

GAMV: Yeah, it's really an amazing clip. And one of the things that I noticed in it is that it also reflects the minimalism of the song. I mean, it's a big set but there's not a lot going on.

Rebecca Blake: No. Exactly. I was very determined that it not looked like a music video, whatever that meant at the time, and that it would just sort of have this very pared-down discipline. And because I had a lot of theatrical lighting and I also use that conceptually, I didn't try to flood the frame with a million lights and things like that. I did it in a kind of very minimal way, purposely.

Of course, the Kiss video isn't available on Youtube in any quality that you would even consider watching all the way through, because Prince. So here, instead why not watch Age of Chance's cover? (Which is definitely not one of the finest music videos of all time.)

By the way, has any progress been made on representing 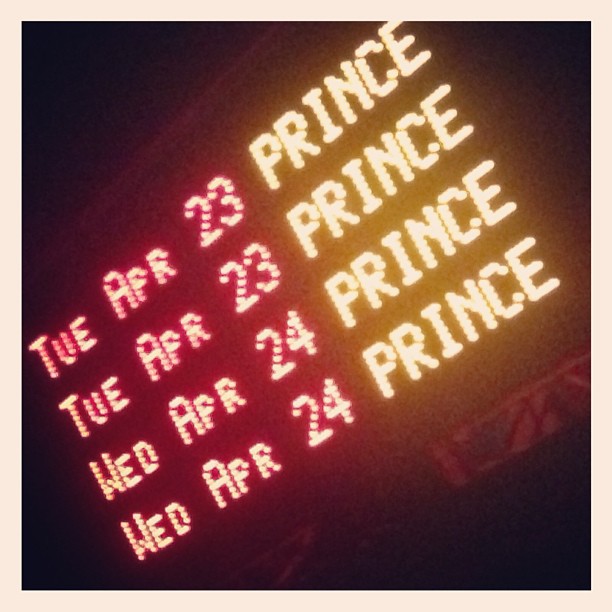 Now is probably a good time for you to re-read my 26-Apr-2013 blog post about our series of four Prince shows. It's a good story.

I'd sure love to share some music with you right now, but if you know anything about Prince, you know that he didn't make that easy.

This was not the first time Prince had played here, though sadly it was the last. Paste Magazine has put up a pair of streams of Prince's 1993 show at DNA Lounge. Go listen! It sounds great. They say:

Prince and his band would occasionally play unannounced aftershow parties at local nightclubs, often into the wee hours of the night. These aftershows were the hippest place to be and provided Prince and the New Power Generation musicians had the ability to intimately connect with a small audience of hardcore fans. These performances also allowed Prince to experiment with his music, performing new, unreleased and cover material as suited his spontaneous whims. These performances often took on an even wilder abandon than the official concert dates and those lucky enough to attend experienced something not soon forgotten.

The Act 1 Tour hit San Francisco on April 10, 1993 and San Jose the following night. One of the most memorable aftershows occurred after the San Jose date, when Prince and the New Power Generation returned to San Francisco and partied into the wee hours at San Francisco's DNA Lounge. Taking the stage at 3:30am, they proceed to tear it up for another two sets before a highly enthusiastic small club audience. Taped by the Bill Graham Presents crew, who provided sound reinforcement for this late night appearance, this remarkable recording faithfully captures Prince and the New Power Generation in high spirits, laughing and joking their way through two sets jam packed with the undeniably danceable, sex-fueled style of music that made Prince such a phenomenon.

I can't find a torrent of this recording, though. There's a torrent of that same 1993 show here, but it's extremely low quality -- I wouldn't even bother downloading that one. I mention it only so that you can exclude it from your searches.

As you might expect, he was pretty adamant that we not do our usual webcasting of the show. However, a few days afterward, I did discover a bootleg recording that some audience member had made of two of the four DNA Lounge 2013 Prince shows -- and it sounded really good. This bootleg had been at purplehouse2.blogspot.com, but of course that blog is long gone, and the Wayback Machine barely crawled it. Still, if you can find a copy of that, it's a fantastic recording. The CD cover says "The Professor" and "Enhanced by Dabang", if that helps in your searches.