The Man With Perfect Poop

Over the past 2½ months, Eric has generated 10.6 pounds of poop over 29 visits. [...] To donate, Eric had to pass a 109-point clinical assessment. There is a laundry list of factors that would disqualify a donor: obesity, illicit drug use, antibiotic use, travel to regions with high risk of contracting diseases, even recent tattoos. His stools and blood also had to clear a battery of laboratory screenings to make sure he didn't have any infections.

After all that screening, only 3% of prospective donors are healthy enough to give. "I had no idea," he says about his poop. "It turns out that it's fairly close to perfect."

And that, unlike most people's poop, makes Eric's worth money. OpenBiome pays its 22 active donors $40 per sample. They're encouraged to donate often, every day if they can. Eric has earned about $1,000. [...]

Cool air blasts his face as Kim opens the freezer. His jaw drops at the sight of his icy brown bottles, which look like frozen chocolate milkshakes. The bacteria inside them is still alive, cryogenically preserved at -112°F.

I guess VMware decided that the way to improve a perfectly good park was to cover it with tables and literally-astroturfed benches. I feel like this is a pun that I haven't gotten yet. Maybe they can do this to Dolores next!

That was too horrible to contemplate, so instead I sat up top by the seagull lake, where it was very windy, meaning every few minutes my face and lunch got covered with a rain of aerosolized birdshit. But I guess pink eye is better than having to overhear wet dreams of content gamification.

BURN IT DOWN. BURN IT ALL DOWN.

I may have actually choke-laugh-snorted out loud while waiting for the red light. I may have.

"Helper often speaks of the coming war between man and the brotherhood of machines."

According to the study, "Escaping from Children's Abuse of Social Robots," obstruction like this wasn't nearly the worst of it. The tots' behavior often escalated, and sometimes they'd get violent, hitting and kicking Robovie. They also engaged in verbal abuse, calling the robot "bad words." [...]

Next, they designed an abuse-evading algorithm to help the robot avoid situations where tiny humans might gang up on it. Literally tiny humans: the robot is programmed to run away from people who are below a certain height and escape in the direction of taller people. When it encounters a human, the system calculates the probability of abuse based on interaction time, pedestrian density, and the presence of people above or below 4 feet 6 inches in height. If the robot is statistically in danger, it changes its course towards a more crowded area or a taller person. This ensures that an adult is there to intervene when one of the little brats decides to pound the robot's head with a bottle (which only happened a couple times). [...]

When questioned, 74 percent of the kids described the robot as "human-like" and only 13 percent as "machine-like." Half of them said that they believed that their behavior was "stressful or painful" for the robot. So basically, most of these kids perceive the robot they're abusing as lifelike, and then just go ahead and abuse it anyway. While that's a little disturbing, it appears to be in line with some child psychology research on animal abuse.

Before, after, and a rhetorical question.

Hey, remember Suck? This article is ten years old and is about a defunct web site ten years older than that, but Suck was one of the best things to climb out of the slime of the primordial web, and this retro-retrospective made me all nostalgic.

Somewhere around a year in to Suck's lifetime I was on "vacation" and I read the whole site from the beginning in one sitting, and then sent them a rambling stream-of-consciousness fan letter that didn't have much in the way of sentence- or paragraph breaks. Carl said, "You read all of Suck? Even we don't have the courage to do that," and then he sent me a t-shirt.

The other day this guy was interviewing me and we talked about Suck and how it had managed to capture a snapshot of the festering shitstain that passed for "tech culture" -- "Way better than fucking Dilbert did", I said -- and we laughed a dejected laugh.

Anuff learned that HotWired was hiring, and was soon invited for an interview with Steadman and Bayers. "I don't know what Carl saw in me, other than somebody who probably believed in too many things, and I think Carl relished the opportunity to crush those beliefs." [...]

Like Polly, the Suck office in Filler was a nastier, more contentious place than its real-world counterpart, but not by much. "I'd say a lot of it was driven by actual true stuff," says Anuff. "I don't know if it was verbatim true. Heather is one colicky baby. She was fighting with everybody. She used to go at it with Ana, with Carl, with me, with Terry, with Matt. Oh my god, Matt Beer. And then Ana, of course, is a terror, too. What a bunch of fucking babies. In some sense it was the most unprofessional group of crybabies, prima donnas, and problem employees. Everybody there was a problem. I don't even think I knew any better, because I was a problem too."

"The domain suck.com is for sale. To purchase, click here for more details."

Why the rich love Burning Man

Yeah, it's that time of year again. Here's your Two Minute Hate:

The top-down, do what you want, radically express yourself and fuck everyone else worldview is precisely why Burning Man is so appealing to the Silicon Valley technocratic scions.

To these young tech workers -- mostly white, mostly men -- who flock to the festival, Burning Man reinforces and fosters the idea that they can remake the world without anyone else's input. It's a rabid libertarian fantasy. It fluffs their egos and tells them that they have the power and right to make society for all of us, to determine how things should be.

This is the dark heart of Burning Man, the reason that high-powered capitalists -- and especially capitalist libertarians -- love Burning Man so much. It heralds their ideal world: one where vague notions of participation replace real democracy, and the only form of taxation is self-imposed charity. Recall Whole Foods CEO John Mackey's op-ed, in the wake of the Obamacare announcement, in which he proposed a healthcare system reliant on "voluntary, tax-deductible donations."

This is the dream of libertarians and the 1 percent, and it reifies itself at Burning Man -- the lower caste of Burners who want to partake in the festival are dependent on the whims and fantasies of the wealthy to create Black Rock City.

Burning Man foreshadows a future social model that is particularly appealing to the wealthy: a libertarian oligarchy, where people of all classes and identities coexist, yet social welfare and the commons exist solely on a charitable basis.

You Are The World's Greatest Computer Hacker

You uplink into a pervert club, one of the many sin joints littered across the cybercity. Around you dance netheads, sex downloaders, gulch manglers, and all other types of indecent sickos. Freed from the constraints of reality, they meet here to engage in their darkest desires. It's a seedy dive, but a good spot to meet criminal employers.

> Order a drink and wait for a mysterious employer to approach you.

The pervert club's waitress glides up and greets you with a cheerfully synthetic smile. "What drink would you like me to shit for you?" she asks.

> Excuse me, did you say you were going to shit a drink for me?

"Yes, we're all rude perverts here, so shit is a thing we like. It's the fecal sensation we can't get enough of. Everything on the menu gets squeezed out of my simulated ass. Do you still want a drink?"

The waitress climbs up onto the bar, squats down, and, with a moan of gross pleasure, craps out a piña colada. You take a sip. It's not bad.

7 years ago
The plumbing, both below and above ground, is done, and approved, and now they can close up the bars, which they have begun doing. Most of the wall dividing the restaurant from the nightclub is complete. (It will be a mostly very-thick-glass wall, with curtains for when we want to block off more light.) Also, the front wall windows are framed and awaiting glass insertion. Everything is going relatively smoothly, but not as quickly as I would like, but it's for a new reason than usual: our contractor can't find workers. Apparently everybody in construction is really busy right now, so we've only got two or three guys working, when we could be keeping six or seven of them busy without them stepping on each other. So that's a drag. And as a result of that, I'm pretty sure we've already blown our internal deadline, and won't be open by REDACTED, which is an annoyingly expensive deadline to miss.

The rusty gears of the ABC have begun to roll. They gave us their proposed conditions for our liquor license ("WHEREAS the issuance of an unrestricted license would be contrary to public welfare and morals...") and they're mostly bearable, but we're still bickering about language, which goes like this:

"You realize that the literal interpretation of this is impossible for anyone to comply with, right?"
"Well that's what we're putting on everybody's permits now. And we wouldn't expect you to literally comply with it, we're all reasonable people here."
"I think it would be reasonable for you to write down the words with which you expect me to literally comply."
"No."

Getting approval for parking the walk-in fridge in the base of one of the light wells is taking longer than it sanely should, so we might end up pushing that project out to after opening, and just only having bottled (not tap) beer for the first few weeks. That's not ideal, but being open is better than not being open.

Our newly-poured floor already has cracks in it, because the construction guys next door keep backing things into the building hard enough to buckle it. Like our own little 2.8 quake every few days, just to keep us on our toes. I guess this is going to be an ongoing process. 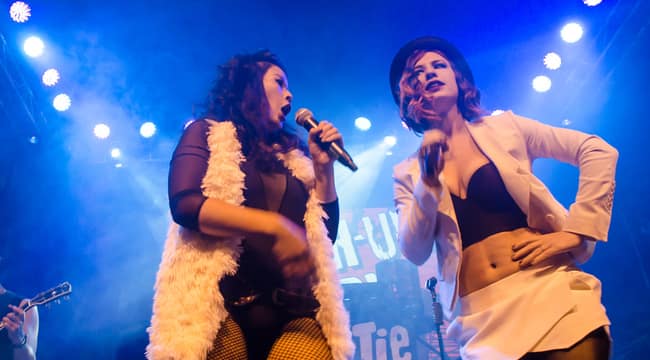 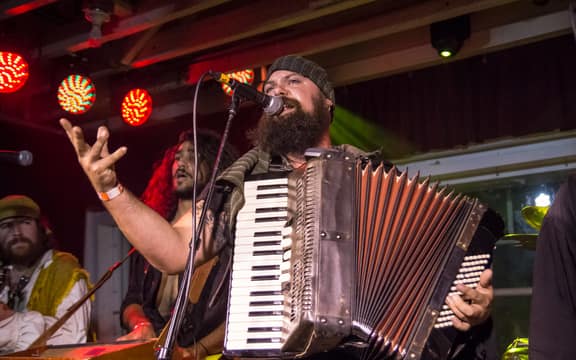 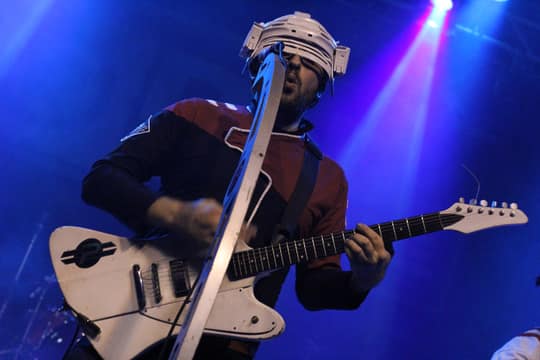 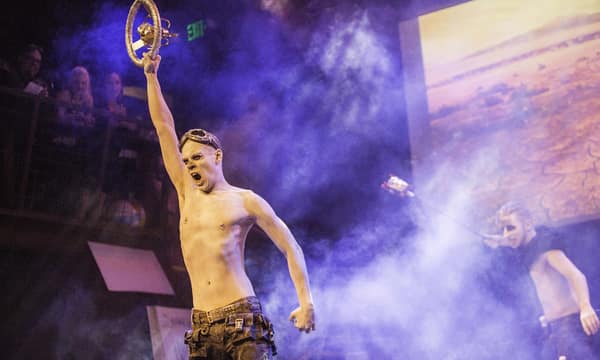 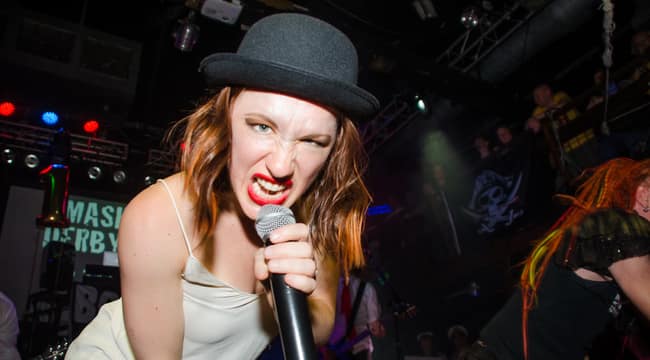 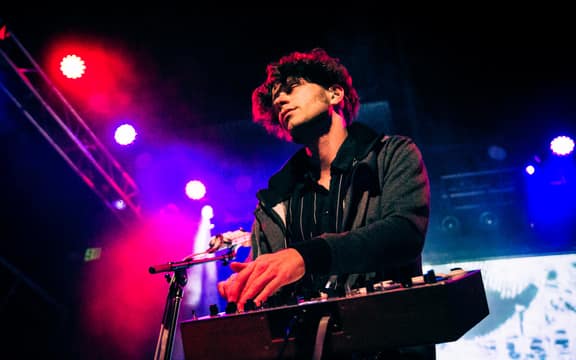