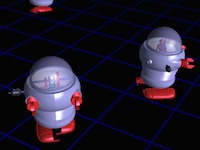 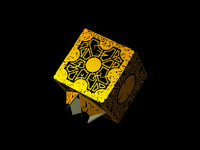 XScreenSaver 5.30 out now. iOS version, too.

I wrote a new screen saver, WindupRobot. This is one of my finest, if I do say so myself. You saw a sneak preview of it last month when I was learning Maya. The original plan was to 3d-print this robot to use for the prize statues in the DNA Lounge Cocktail Robotics Grand Challenge (happening this Sunday!) but that didn't work out, and instead we built the statues by hand. But that 3d model did not go to waste, because, screen saver!

I also put an absurd, OCD-level of work into the Lament saver. When I first wrote that thing, back in 1998, I didn't have any 3D modeling software, so the way I cracked the problem was: 1) I modeled it out of clay, cutting apart a cube until I understood how it al fit together, and how the visual effects crew had cheated; 2) then I modeled it out of paper; 3) then I measured that paper, and typed in the numbers. So, anyway, it's 2014 now and flushed with my success at managing to export Maya and Sketchup models in a form that XScreenSaver can ingest, I made new models, re-built all the texture maps and added a bunch of models and behaviors that were missing, like "tube", "sphere" and most importantly, "Leviathan". You all laughed at me for the research I did on this a couple weeks ago, but who's laughing now, punk?

Also, using your finger to spin the various models around on iOS has inertia now. It's soothing.

And finally, I think the OSX auto-updater finally works. It was broken in a very unfortunate way: when it ran, it would give you a dialog showing that an update was available; download it; prompt you for the admin password; and then not actually update anything. Actually it updated the "XScreenSaverUpdater.app" program but not any of the savers! Doh. But I think that it works now. This time for sure. I think.