The TBMs are almost done:

The first tunnel boring machine (TBM) will be arriving at the extraction pit soon. The contractor has filled the retrieval shaft with water to balance pressure on the face of the machine.

The TBMs are almost done, and still, none of you have gotten me a tour. I think you should know that you have all failed me, and I am disappointed in each and every one of you.

9 years ago
Find and kick Google Glass devices from your local wireless network.

Requires 'beep', 'arp-scan', 'aircrack-ng' and a GNU/Linux host. Put on a BeagleBone black or Raspberry Pi. Plug in a good USB wireless NIC (like the TL-WN722N) and wear it, hide it in your workplace or your exhibition.

Gary Dudek, 54 of Wallingford, Delaware County, allegedly stole $357,000 worth of human skin from Mercy Philadelphia Hospital from November 2011 to July of last year.

From September 2006 to September 2013, Dudek worked as a "tissue-regeneration specialist" - a sales representative - for Organogenesis, a Massachusetts firm that specializes in regenerative medicine, a company spokeswoman said.

But in that capacity, Dudek would have had no use for human skin, said the spokeswoman, Angelyn Lowe, director of corporate communications at Organogenesis.

Dudek's job title allowed him to order grafts whenever he needed, according to court records. The hospital only needed three in stock at a time, but Dudek ordered an unauthorized 219 - valued at $1,700 each - which the hospital never saw, the records say.

Philadelphia police said they were unaware of a motive or of what happened to the grafts allegedly ordered by Dudek.

Apparently I'm the only person in SF who has always thought that Defenestration is a hideous fucking eyesore. Good riddance.

I think our only public art that I like less is that giant plastic bow and arrow on Embarcadero. Bleeeuuuugggghhhhh.

DNA Lounge: Wherein the coffin has nothing to do with the impending witch hunt.

9 years ago
On Monday, some crackhead lingered around outside of Death Guild all night trying to sell a coffin. Eventually the goths took up a collection and paid him $300 for it. He was asking $500. It wasn't even a cool coffin. And no, it did not appear to have been used.

You people. I can't even.

Apparently the Bar Rescue people have been sniffing around town. They called us, too. I'm sure that will go every bit as well as the Real World invasion did.

And here's some great news: apparently ABC has been bragging for months about how they're about to bring drug charges against "five large SF clubs", so we're all waiting for the shoe to drop on that one and find out who they're running their sting on.

In the past, the way these operations have gone is like this: an undercover ABC agent says to the bartender, "Hey man, do you know where I can buy THE DRUGS?" and the bartender says, "I dunno, go ask someone else." Then he goes and asks someone else and is eventually able to buy something, and testifies in court, "The bartender directed me where to buy drugs." And who's the judge going to believe, the cop or the bartender?

9 years ago
Motherfuckers hotlinked an image from my blog and DDoSsed my server today. They may fucking love science but they fucking hate the web.

Because, you know, apparently even after getting their own TV show, paying for their own image hosting is too onerous. Or just tooooo haaaaaaarrrrrd.

Also, may I direct your attention to: 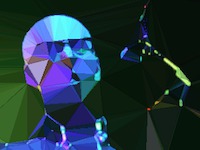 XScreenSaver 5.27 out now. A couple new hacks this time, and a bunch of performance improvements and bug fixes, plus support for multithreading. Currently only the analogtv hacks and interference are taking advantage of that, but it helps!

I'm moderately pleased with how tessellimage (pictured to the right) looks, but it's really slow until it builds its cache.