7 years ago
All work and no play makes the transcript very interesting.

An alcoholic Manhattan court stenographer went rogue, channeling his inner "Shining" during a high-profile criminal trial and repeatedly typing, "I hate my job, I hate my job" instead of the trial dialogue, sources told The Post.

The bizarre antics by Daniel Kochanski, who has since been fired, wreaked havoc on some 30 Manhattan court cases, sources said, and now officials are scrambling to repair the damage.

One high-level source said his "gibberish" typing may have jeopardized hard-won convictions by giving criminals the chance to claim crucial evidence is missing.

Erotica Written By An Alien Horrified By The Human Body

7 years ago
"Jostling occurred for an extended period of time, then silence."

"They mutually thrashed their softest, most vulnerable parts about in a normal attempt to seek pleasure at the other's expense."

"Their mouths, which mere minutes before had been employed in the process of demolishing and ingesting various foodstuffs, were now jammed up damply against one another while still being used for breathing, which must have been more than a little uncomfortable."

"Bits of one jammed into bits of the other, dangerously close to some of the weakest and most important internal organs."

"With absolutely no regard for personal space, the two of them created an unnecessary amount of friction, generating sweat in the process."

"Some sort of gel emerged."

"One sat upon the other, like furniture that sneaks inside of your body."

"Her genitals engulfed his for some arcane purpose."

"One of them put their teeth-cave directly over the other's fleshiest appendage, but did not bite it."

"His genitals emerged from his body with no protection whatever, so that any passing bird could have easily swooped down and carried them off in its beak."

"They licked one another as if they were food, but they were not food."

"They took off their clothes, leaving their soft and hairless skin exposed to dust, wind, cold, and various other deadly elements."

"Jostling occurred for an extended period of time, then silence."

"Everything was just a mess."

"Various parts inched forward, then retracted, rather as turtles do."

"Together they put all of their clothes in a pile on the floor, where the dog lives."

"Only hours before he had used the very same appurtenance to urinate. He had not washed it in any significant way before inserting it into the other human's body."

DNA Lounge: Wherein "I got arrested at DNA Lounge and all I got was this lousy t-shirt."

7 years ago
At midnight on Monday, a girl was falling down and vomiting in the parklet. This young lady had previously been discovered in the women's room chugging from a liter bottle of Jack Daniel's. She was also wearing a DNA Lounge t-shirt that was two sizes too big. It won't surprise you to learn that both of these items had, until recently, been behind one of our bars. 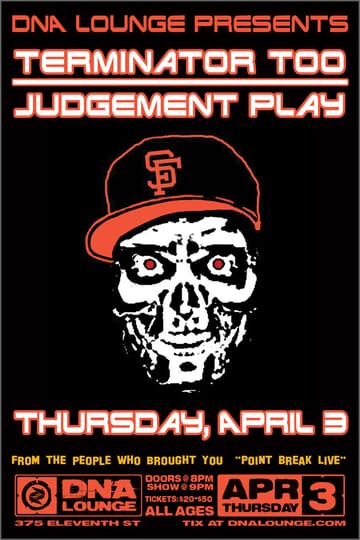 The cops asked if we would just drop it if she paid for what she had stolen, so we charged her for what we charge for shots times how many shots are in a bottle. Plus the shirt. And the pin on the shirt. Oh, and also our ATM charged her a service fee on top of that.

"The customer began to remove the t-shirt, at which point I informed her that her boyfriend had purchased it and that it was now her property."

Wear it with pride, klassy lady.

Tonight is Terminator Too: Judgement Play! It's very nearly sold out, so get your tickets now. Next month's show is also selling fast...

And of course tomorrow is Point Break Live.