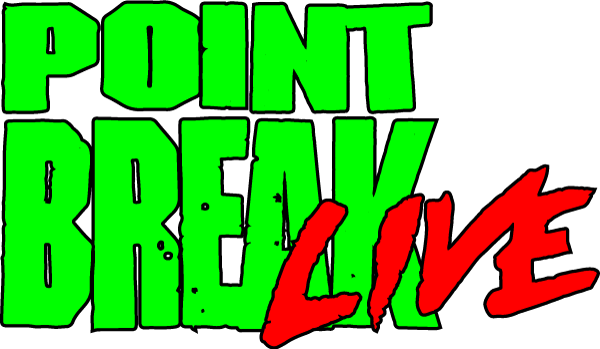 I am so excited about this! We just booked Point Break Live, one of the most entertaining stage shows I've seen. I saw it three times during one of their earlier runs in San Francisco, and it's absolutely hilarious. You must see this. You must.

Not only is it a live adaptation of a movie that I love unashamedly and without irony -- shut up -- but each at each show, the Keanu Reeves role is cast from the audience, chosen by applause during their audition. There are waves, there's blood, there's skydiving.

Tickets are on sale now, and they're very likely to sell out. For the initial run, we're doing two shows a night, first Fridays in November, December and January.

Though not technically an 80s movie, having come out in 1991, I will also mention that tonight is New Wave City's 21st Anniversary. So, you know, it's finally old enough to drink.

THE WILLIE BROWN BRIDGE MUST BE STOPPED.

Since we first mentioned it last month the petition to rename the San Francisco-Oakland Bay Bridge after Emperor Norton I has accumulated roughly 2,800 signatures in support of the effort. The Sacramento-based effort to rename the West Span after Willie Brown, on the other hand, is a steaming load of crap being forced upon the Bay by glad-handing pols in the state capitol, eager to bestow an honor on a man responsible for grossly inflating the costs of the new span. We cannot allow any portion of the Bay Bridge to be named for Willie Lewis Brown Jr.

Even the Chronicle -- a newspaper that counts Willie Brown among its employees and allows Brown to post free advertisements for Subway Sandwiches with impunity -- thinks renaming the bridge in their columnist's honor is a bad idea. "No way," the Chronicle's editorial team wrote earlier this week.

The Chronicle goes on:

Willie Brown (along with Gov. Jerry Brown) was a prime force in holding up the rebuild of the eastern span. He shares the blame for the enormous cost overruns that pumped the bill from a projected $1.5 billion to $6.4 billion.

Yet the state Legislature, where Brown ruled as Assembly speaker, voted 68-0 to name the western span after him. Now this measure is before the state Senate, where it should be shelved for good.

Today, the state Senate did the opposite of shelving the measure: they fast-tracked it for a hearing on Monday, September 9th, going against their own rules in the process. Per the official policies of the Senate Transportation and Housing Committee, which has to approve the resolution before it can move any further, highways and structures may not be named after a living person, which Willie Brown continues to be at the moment.

Monday's fast-tracked hearing is coming up in just five days, meaning the Senate gave the public the absolute bare minimum amount of notice before setting a date. But there remains hope for the Willie resistance: according to those previously cited committee policies, the proposition to rename a structure must also reflect "a community consensus and be without local opposition." Hi, Sacramento, here are 2,800 pieces of opposition and counting.

If that's not enough to strap a pair of cement shoes to the measure and sink it to the muddy bottom of the bay, then consider this: Willie Brown himself -- the single most egotistical person currently alive in the Bay Area with the possible exception of Larry Ellison -- doesn't even approve of putting his name on the bridge. As he told local PR agent Lee Houskeeper, he too would prefer to see that honor go to Emperor Norton I.

I know I've posted about this bridge business several times now, but seriously, this Willie Brown situation is some steaming bullshit that we have to kill. Sign the damned petition. It is a moral imperative. It is literally the least you can do.

Today is the memorial service for for Jose Julio Sarria, Absolute Empress I de San Francisco, The Widow Norton.

They are taking the magic Lego block out of the hole and putting it on the cyber-intestine truck. What the what.

Russian synthpop band does instrumental Eye of The Tiger. With keytar.