DNA Lounge: Wherein we're gonna glitter you all up. 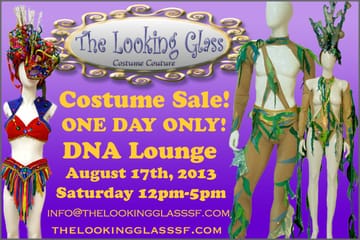 You should come to this thing we're doing tomorrow afternoon: our friend Monique is starting a costuming business and is doing a pop-up shop Saturday from noon to 5pm in Above DNA.

She just got back from Vegas with the contents of a warehouse full of old showgirl costumes, among other things...

Apparently not The Onion:

9 years ago
Seattle police will hand out bags of Doritos at Hempfest on Saturday.

Police department spokesman Sgt. Sean Whitcomb confirmed the unusual duty, saying he and other officers will distribute one-ounce bags of nacho-cheese chips with educational information affixed to them about the state's new legal pot law.

The bags also will contain a label with a link to the department's "Marijwhatnow" FAQ, which explains that, yes, adults are now allowed to possess up to an ounce of weed, and that, no, you can't get back the pot that cops might have seized before voters legalized recreational weed in last November's election.

"Please ignore maliciously false reports that we're giving out Bugles at @seattlehempfest. We would never, ever do that," the department tweeted Wednesday.

9 years ago
You probably need this.

I need this and I don't even own a record player any more.

It's impossible for me to make a list of my favorite bands, because I have a thousand favorite bands, but on any such hypothetical list, Cabaret Voltaire would be in the top three of all time. And these are (maybe) their best and (likely) their most influential albums.

(Gasoline in Your Eye was previously only available on VHS.)

Twenty people were injured, with seven sent to hospital, when a promotional stunt in Seoul for LG's G2 smartphone went wrong, the company has said.

People arrived with BB guns and knives on sticks for a race to grab smartphone vouchers hanging from helium balloons.

"LG is investigating the incident to ensure that such an occurrence can be avoided in the future."