DNA Lounge: Wherein the new stair nosing's here, and we pump, pump it up.

8 years ago
Oooooh, pretty! This is so much better than the crappily-painted-yellow aluminum nosing we've been using before. It's powder-coated steel, so it should stay yellow for much longer than the couple-of-weeks that the paint used to last. (Please imagine this with the residual yellow paint on the stairs painted gray). These are also going on the currently-noseless stairs leading from the street to Above DNA. Road cases get dragged up and down those stairs several times a week, so they really need some protection. Check out the crazy curve in this last one, from the stage-right stairs. The corresponding stage-left stair doesn't look like this, because there's nothing even remotely symmetrical about our stage. The front edge of the stage is about 4" longer than the back edge, and the left stair landing is 6" or more higher than the right. Also either the pillars or the stairs aren't the same distance from the front wall and I'm not really sure which. It's the DNA Mystery House. The fact that he actually bent that piece of steel to fit around the pole shows that our contractor is almost as obsessive about these things as I am, which is why we keep him around!

He brought a laser level out today to take a look at the wavy, multi-layered mess that is our sidewalk, and figure out what we need to do to make the parklet's decking line up with it. It's... not simple. But it looks like construction on the parklet will begin off-site on Monday, and installation will probably begin the Monday after that! (We don't actually get the Kickstarter money for a few weeks, but we're gonna jump the gun a little.)

We recently made a change to how our soda guns and beer pumps work, spurred into action by a de-obfuscated invoice. So, we've got this giant CO2 tank in back, that Airgas fills from the street, and all this time we thought we were just paying them for gas, but they made their invoices clearer recently and we realized that we're actually renting the tank from them too! Which is insane. So we're buying the tank, about ten years too late. But that caused us to also think a little more critically about how the whole Rube Goldberg system works and fix some stupidities in it.

I'll bet you're really curious how all that crap works, aren't you? Well I'll tell you.

So we've got two serieses of tubes, one set for beer and one set for soda. The beer starts in refrigerated kegs and is pumped up to the bars as-is; the soda starts in syrup bags, is pumped to the bars as warm syrup, where it is then mixed with water and CO2 and cooled just before the tap. (There's a big, flat aluminum thing that lives under the ice in the bar's ice well that does the mixing and chilling. Fun fact: the carbonation process requires low temperatures, so if there's no ice at the bar, soda comes out flat.)

Beer is forced out of the kegs by displacing it with CO2, and both systems are pumped along with pumps that work kind of like a single-chambered heart: pressurized gas is used to turn a little actuator that compress a bladder, forcing the delicious nectar through some valves. The gas going into the pump doesn't actually enter the line being pumped. The old way looked like this: 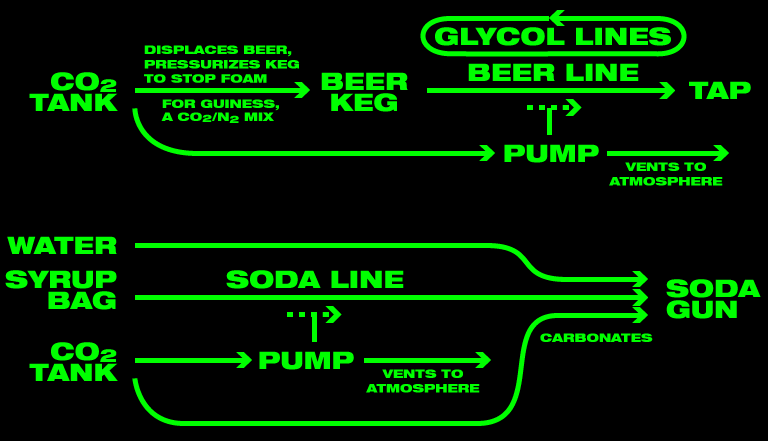 The glycol lines are a closed loop of antifreeze that run alongside the beer lines to keep them cold.

There are also some extra valves in there to prevent back-flow, so that if a keg is empty, the beer in the line is locked down so that it doesn't foam up.

(Fun Fact #2: when you have 2 kegs in series, the one on the outside always empties first. The beer from the outer keg is displaced into, and will fill, the inner keg before being pushed downstream.)

So, you may notice that it's kind of insane that we're paying for CO2 just to spin the actuators on the pumps, and then fart that perfectly good carbon dioxide right out into the room. So we stopped doing that, and bought an air compressor to run them instead: 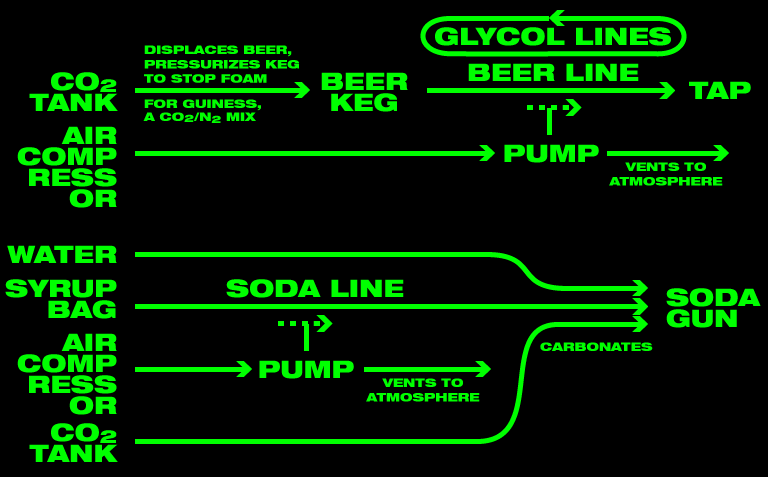 We're still using CO2 to displace the beer in the kegs (if you use air, the yeast goes hog wild and the beer goes bad) and to mix with the soda (because the C is for carbonation) but this should cut our CO2 bill by a lot.