Our hard tickets were pretty sweet.

Well, that was four of the best shows I've ever seen in my life. I just watched Prince perform for six to eight hours, and I would have watched a third night as well if we were lucky enough to have one.

He's just mind-blowing. He is a force of nature. And his band is amazing, too. Here, read some reviews:

My mom couldn't stop talking about how much this show reminded her of seeing Hendrix at Woodstock.

This has been an exhausting few weeks, but: we nailed it.

Our staff did such a fantastic job under incredibly stressful conditions! Many of them put in double shifts, two days in a row.

In fact, a number of customers who were sending us hate mail complemented the staff, e.g., "This show was terrible and this is the worst venue the world has ever seen, even though the staff was nice." We got two phone calls today from people calling to say only, "You guys did a great job and your staff was awesome." Nobody ever calls, or even emails, to say things like that. People only call to complain about something!

So let's hear it for the DNA crew. Well done, folks!

Lots of people were pissed off about lots of things, though. The entitlement ran deep. So very deep. A few of the more popular things that people hated on us over:

Overall, though, response has been overwhelmingly positive.

We must live in a far more violent world than I realized, though, because it seems that about one in fifteen people are mugged and have their credit cards stolen over any given three week period. These were all people trying to use scalped tickets, hoping that if they all gave us exactly the same obvious story, we wouldn't check their credit card at will-call. Probably a couple of them were telling the truth, but we heard this story so many times it's just statistically impossible.

At its peak, the line wrapped all the way around the block: it turned the corner onto Tenth Street. Here's some video I shot of it, when it was not-quite-yet turning the corner:

Still, once the doors were open, we got all those people inside in about 20 minutes.

One of the things Prince wanted was a curtain at the front of the stage. We don't have one, so we rented one, and it was pretty awesome, check this out:

Once the band was set up, though, the curtain was kind of in the way, so they decided not to use it at all. Bummer.

I've realized that I never told our Prince story from 2000! We were deep in the throes of remodeling, and there was no floor in the main room: they were excavating the drains, so it was basically piles of dirt and open trenches full of rust and horror. It looked like this. This is the view from standing on the stage, looking at where the main bar is now: And then we got a phone call: Prince would like to play a secret after-show there in three days.

Barry and I stood on top of one of those piles of dirt staring at that room for hours, yelling at each other and trying to figure out how we were going to cover this open pit with plywood and rent and install an entire sound system in two days. Because you do not say no to Prince. But we did. We said no.

Here's a view we don't get to see very often: Prince's tour bus, shot from a neighbor's apartment: 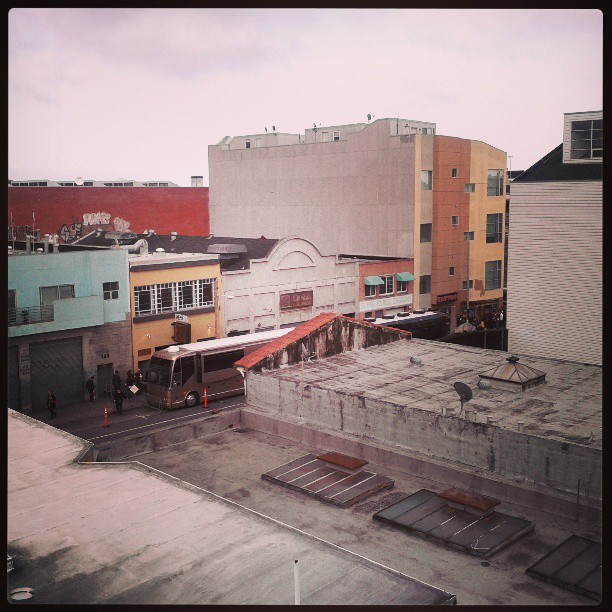 This is approximately as close as you were allowed to get to Prince with a camera in hand.

Even I couldn't get a photo pass. In my own club.

But you don't say no to Prince.

Since I knew you were all wondering, I asked: they are not manufacturing the wall tiles on site like in that video, but are shipping them in from Germany.

So there you go.