Schneier on the Internet Surveillance State

This is ubiquitous surveillance: All of us being watched, all the time, and that data being stored forever. This is what a surveillance state looks like, and it's efficient beyond the wildest dreams of George Orwell.

Sure, we can take measures to prevent this. We can limit what we search on Google from our iPhones, and instead use computer web browsers that allow us to delete cookies. We can use an alias on Facebook. We can turn our cell phones off and spend cash. But increasingly, none of it matters.

There are simply too many ways to be tracked. The Internet, e-mail, cell phones, web browsers, social networking sites, search engines: these have become necessities, and it's fanciful to expect people to simply refuse to use them just because they don't like the spying, especially since the full extent of such spying is deliberately hidden from us and there are few alternatives being marketed by companies that don't spy.

This isn't something the free market can fix. We consumers have no choice in the matter. All the major companies that provide us with Internet services are interested in tracking us.

How did we have the claw game and the restaurant lobster tank for so long without marrying them?

"My heart started racing. And I was like, Oh my God. I started to realize -- I thought they were docile or whatever, I didn't know they moved so fast and stuff. And it was kind of like fighting the claw, which would be cool if they didn't tape it up so it had a fair chance. It would be able to fight the claw."

The Venn Diagram of Irrational Nonsense

The curiously revered world of irrational nonsense has seeped into almost every aspect of modern society and is both complex and multifarious. Therefore rather than attempt a comprehensive taxonomy, I have opted instead for a gross oversimplification and a rather pretty Venn Diagram.

In my gross over simplification the vast majority of the multitude of evidenced-free beliefs at large in the world can be crudely classified into four basic sets or bollocks. Namely, Religion, Quackery, Pseudoscience and the Paranormal.

However as such nonsensical beliefs continue to evolve they become more and more fanciful and eventually creep across the bollock borders. Although all the items depicted on the diagram are completely bereft of any form of scientific credibility, those that successfully intersect the sets achieve new heights of implausibility and ridiculousness. And there is one belief so completely ludicrous it successfully flirts with all forms of bollocks.

9 years ago
You guys.

Tickets are on sale right now:

Some of you heard about this on Wednesday night when the beans were spilled on a webcast -- we can tell from the email and phone calls we've been getting already, oh yes -- but we didn't have permission to say anything until just now.

I think the last time Prince performed at DNA Lounge was in April 1997 (almost exactly 16 years ago!) and before that, in April 1993. But those were secret-ish late-night gigs after his main show at much larger venues. This time, we're an official stop on the tour!

DNA Lounge: Wherein we have come to re-brand your Apple logos!

9 years ago
The new stickers are in! Check this out:

These are specially formulated to re-brand laptops! They are die-cut foil: the DNA Lounge logo is a transparent cut-out. If you stick one of these over the glowing Apple logo on your laptop, the DNA logo will light up, and no other light bleeds through!

You will see no "Ghost Apple" like you always see with other, lesser stickers. The animation above is not a simulation. That's exactly what the video I shot looked like, with the sticker on an Apple laptop.

At the low low price of $1, that's just one of your Yankee Dollars!

It took us quite some time -- like, three years -- to both figure out how to make this work, and then to find someone willing to actually do it, let me tell you.

So please buy them up, ok?

9 years ago
We got a funny phone call today, and by "funny" I mean "not actually even a little funny."

Officer Chan, the permitting officer for SFPD, called to remind us that we're required to have video surveillance that records everything our customers do, and to give that footage to SFPD any time they ask, without a warrant or explanation. "Actually, that's not the case, I'm not required to do that," says Barry. "It's a part of the Good Neighbor Policy," says the cop. "No, actually, it's not. And it's also not a condition of our permits."

"Well! I guess I'll have to speak to the Entertainment Commission about that, then!"

Thirty minutes later, Barry got a call from this guy's boss, admitting that while we're not technically required to, we really, really should "consider" it. After some back and forth, he says, "Should I take from this conversation that you're not willing to consider this?" "We have considered it, which is why we fought to have that condition not put on our permits."

Someone from the Entertainment Commission said, "Yeah, it's really weird that you don't have that condition, because they're putting that on everybody's permits now. Nobody else has fought it."

Which isn't surprising, since apparently everyone who works for SFPD is going around telling everyone that it's required by law when that's not even remotely true. It's just another sneaky, backdoor regulation that ABC and SFPD have been foisting on everyone without any kind of judicial oversight, in flagrant violation of the Fourth Amendment.

Remember, they tried to get this written into the law back in 2010 and got their asses handed to them, so instead they've just been making it a condition of every new permit ever since. Because they think that they get to just make up laws, all on their own.

Dear bar owners: you do not have to put up with this extrajudicial bullshit. 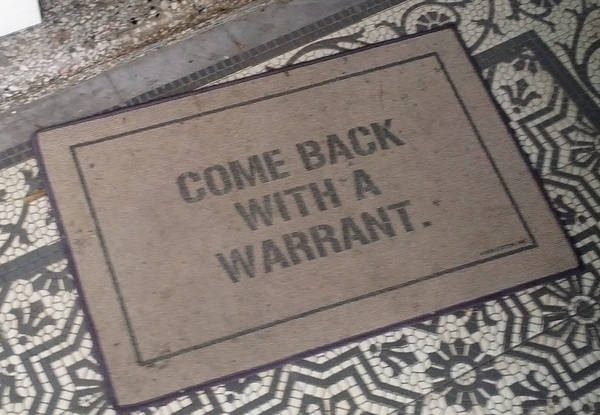