STILL TIME TO BE RIGHT, MORRISON! I REFUSE TO BELIEVE THE INVISIBLES LIED TO US ALL!

DNA Lounge: Wherein we get some press, and the Internet is leaking.

10 years ago
Hey, check out this great profile of our bartender Jared in the Examiner!

DNA Lounge Cocktail connoisseurs may be surprised to learn that subtlety is on the menu at the South of Market dance club and concert venue. Bartender Jared Williams has carved out a niche for himself, mixing drinks as boldly individualistic as the club's clientele.

Also, what is this I don't even:

The Tumblr Takeover: Digital Nostalgia in Nightlife and Fashion

To the untrained eye, many of Parker's photos may just look like an unfinished round of Photoshop play by someone with a good sense of humor and a love for mid-90s Internet graphics. However, to any Tumblr fashion enthusiast, they would be immediately identified as decidedly seapunk. Seapunk is both a genre of electronic music as well as a style of dress and graphic design, created entirely online by a small group of social media enthusiasts and music producers. The music incorporates elements of 90s and early 2000s R&B, pop and rap music over generally downtempo electronic beats. The fashion aesthetic is a mashup of a variety of street wear and punk styles, with an emphasis on goth staples reworked with bright colors and tropical themes.

Parker and Adam, along with San Francisco DJ Marco de la Vega, are the curators behind a new monthly event, #Y3K, which merges this digital culture with the nightlife. As their first event description on Facebook stated, they are "merging the URL with the IRL." [...] "I've been doing club photos for about eight years now, and I used to always slap the club logo on them, which people thought was really cool back then," Parker explains. "That isn't cool anymore. Now I'm creating a new way to brand an event that people are really into." 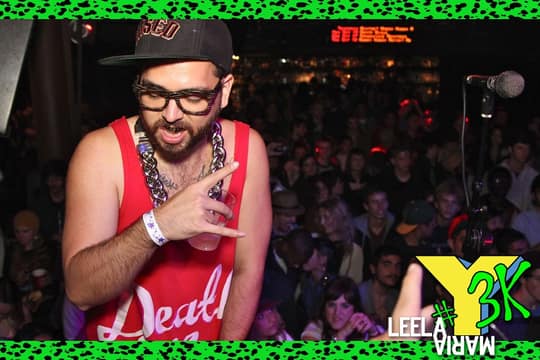 Ok, first of all, slapping giant club logos on photos was never cool.

Anyway, I thought "seapunk" was just making fun of steampunk (that is, goths who painted their New Rocks brown) but now people think it's... a... thing? And it's about like Sorayama dolphins or something, rather than the corsets-and-ukeleles crowd? And that's what they think our Y3K party sounds like?

Y3K started out as kind of witch-housey, but now it's just unsubtly-ironic hiphop to my ears. Apparently I'm out of the loop.

Y3K is taking December off, but the next one is here on Fri, Jan 11.

This all again reminds me of the suppressed decade known as 19A0 and the Phantom Time Hypothesis:

Mixtape of the Lost Decade:

Evidence is mounting that points to a "lost decade" between what we now remember as the 1970s and 1980s, a time whose full cultural trauma and resulting suppression from memory was so complete as to effect itself even on the living. [...]

The space: do we not all feel it? The space. It may be said that the consumer cultures of the 1980s and 1990s, successively exhorting us to embrace artifice and then soul-crushing blandess, were manufactured to "cure" the residual confusion and cultural inconsistency that resulted from the methods used to effect mankind's collective psychic displacement. The hidden "space," however, manifests itself in curious ways -- the obsession with youth and physical condition in those born in the 1960s and 1970s; oddities in climate change data; the apparently freakish pace of economic change in what we believe now to be the 1980s; and so forth. [...] Likewise, no-one familiar with the Lost Decade hypothesis can fail to grasp the religious significance of shutter shades.

SOMA Nature Walk: Is it in yet?

That right there is a lot of rebar going into the ground:

And there's still a lot of your dirt in boss's hole: