Political spending by state, and per voter

In fact, Halloween attendance was quite a bit higher than 2010 and 2011 Halloweens combined. And it was a Wednesday! And it was raining!

Thank you all for coming out! Halloween is our favorite time of the year, and all three of our parties this year were amazingly fun. And just about all of you dressed up! Seriously, I saw almost nobody not wearing at least an effort at a costume. There were a handful of guys wearing t-shirts saying some variant of "I'm an asshole"  "This is my costume", but really, almost none, which made them stick out like sore thumbs amongst all the fabulousity.

So, look at all of you participating! Go you.

Aside from these parties being awesome... it's also nice that now we get to pay some bills. So there's that, too.

I wish we had more photographic evidence that these parties had occurred, however. 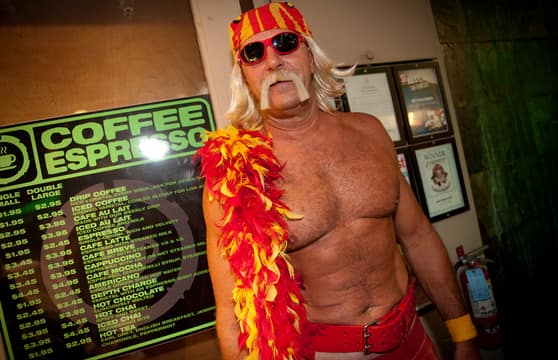 Montana's photos of All Hallow's Eve are up now. Vau de Vire's performances were awesome as always. Hulk Hogan, to the right, was the well-deserved winner of our costume contest. He was spot on, and even had the moves down. Second place went to the two super-glittery gay alien fish or whatever they were supposed to be, and third was "Firey from Labyrinth look at my tits". Which honestly, I think was undeserved, because though it was a great mask, tits are not a costume, and that's what everyone was clapping for. Sigh. I'd have picked the 50s Astronauts for 2nd or 3rd. Well, it was still a marked improvement over last year's Harry Potter debacle.

Though, what do I know, almost nobody even recognized two of my three costumes this year, and I wasn't even trying to be obscure...

There aren't too many photos of Wednesday because the two photographers we hired (one of whom was gonna run a photo booth) didn't show up, so we had to scramble at the last minute.

There are no photos of Booootie on Friday because we never get photos of Bootie. Funny story: I learned recently that, for like a year and a half Bootie has actually been paying someone to sho.

"Well why don't you just hire your own photographer for these events?" you ask. Well, photos are for promoting the event so as the promoter of the party, that's clearly their job, not mine. We have a pretty well-defined division of labor in this industry most of the time over who pays for what. So I'm just going to keep whining about it instead.

Though this has led me to the decision to change our photo policy. The new rule is going to be: If you want to bring your SLR into the club, congratulations, you're our staff photographer for the night. We'll give you a photo pass in exchange for your email address, web site, and your promise that we get a copy of your photos. Don't agree? Leave your camera at home.

At least that way, I'll know who to nag later. We'll see how this works. 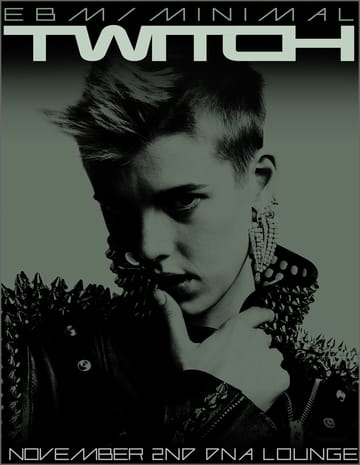 Tonight is our first night running two separate, simultaneous events, one in DNA Lounge and one Above DNA. So that will be interesting.

The event in the big room is I-don't-even-know-what, it's some kind of trivia contest in Russian. Customers keep calling the club and trying to ask us questions about it in Russian, which doesn't really work out to the satisfaction of either party.

Above DNA, we have the first night of our new monthly, Twitch, a dark-electronic dance party brought to you by Omar from Popscene and Justin from The Soft Moon (whose record release party it also is!) In future months this party will also feature live bands, but this first one is a DJ night.

Do check it out, won't you?