a Kickstarter for individual shows

9 years ago
Bring the Gig:

So, this is basically the same thing that Kim Boekbinder did last year but they're trying to build their own Kickstarter-like infrastructure around it.

The new kink here is that if the show reaches a funding goal then the people who pre-bought tickets get their money back and see the show for free, but people who buy tickets after the goal was reached have to pay. (Which can't work, see below.)

It's an interesting idea, but they have done exactly one show so far so take it with a huge grain of salt.

Fans fund goals by purchasing BringTickets before an event's deadline expires. When an event is funded the "Gig is On" and standard Box Office Tickets start to sell. If funding falls short then all funding participants receive a full refund.

Reward: If Box Office Ticket sales reach the magic number, BringTicket purchasers get their money back and go to the concert for free.

What happens after the goal is reached?

After the goal is reached we start selling Box Office Tickets just like any show does. If Box Office Ticket sales reach the magic number all BringTicket purchasers for the event go for free.

What happens if we reach the goal but no Box Office Tickets sell?

Then the fans who funded the show get an exclusive show and have already paid for their tickets.

How do you set the goal amount (How is the cost of the show determined)?

Bring the Gig negotiates and confirms pricing with artists, venues, security, event staff, lighting, sound, insurance and everything else needed to produce a show. We total all these expenses and use that total as the goal amount.

Yeah, this part cannot possibly fly. They can't do that and still get any venues to sign on. Taking the risk of putting on the show for free exactly reduces the problem to that of booking an unknown band with an unknown draw: in other words it obviates the need for schemes like BringTheTicket. The only way this can work is for the sales goal to be that the non-refundable sales exceed the costs, ignoring the refunds.

The goal of services like this is to convince the venue that the show will do well. If you are an established act with history in town, you don't have to do that, the numbers already tell the story. A service like this is for bands that the venues know nothing about: it's a way to eliminate risk. But instead they've just gone and put the risk back in.

Without eliminating that risk, you might as well just be using one of the many gig-matchmaking services like SonicBids who take a cut off the top.

Why don't you accept pledges instead of charging at the time of check-out?

Because pledges are not guaranteed funds, pledges increase the risk for everyone involved, including the fans buying tickets. Also, by offering the potential reward of attending a show for free it opens up too many potential loopholes for abuse.

I think what they just said here is, "Obviously Kickstarter has been a mammoth failure, so we don't want to follow them into the grave." Oh wait, I got that wrong, actually what it says is, "We can't figure out how to do that so we're gonna just lie about it."

Why do my pages in the "Notes" app keep duplicating themselves? It seems like I get a duplicate page every time I edit one of them, but it's a Heisenbug because I can't make it happen at will. If I edit a note on my iPhone, wait a few minutes, edit it again on my iPad, and repeat, it does the right thing. And yet, it seems like every time I edit a note then put my device away, the next day I've got two of them (the pre-edit version and the new one). WTF?

Also, is there still no way for me to get push notifications of new email on my iPhone? My mail lives on an SSL IMAP server under my own control, as is right and proper. I am unwilling to CC all of my email to Apple, Google or any other third party. And yet, I would like to get a notification when new mail arrives, instead of having to manually poll. Am I still out of luck?

As the pace of drone operations has intensified in Djibouti, Air Force mechanics have reported mysterious incidents in which the airborne robots went haywire.

In March 2011, a Predator parked at the camp started its engine without any human direction, even though the ignition had been turned off and the fuel lines closed. Technicians concluded that a software bug had infected the "brains" of the drone, but never pinpointed the problem.

"After that whole starting-itself incident, we were fairly wary of the aircraft and watched it pretty closely," an unnamed Air Force squadron commander testified to an investigative board, according to a transcript. "Right now, I still think the software is not good."

Can someone please tell me what CSS magic I need to do to make the links over on the right side of this page be clickable? (The "2006 Best of the Bay" stuff.) I thought that setting z-order:1 on .event_awards should do it but that seems to be ignored, and all of .event_blurb (the leftmost column) overlaps it as far as clicks are concerned.

9 years ago
I see a lot of bitching about how Facebook has broken posts from Pages and is running some new shakedown trying to get people to buy sponsored posts, but so far none from people who strike me as really knowing what they're talking about.

Who has the facts? What precisely have they changed?

Yes, I have seen the "Dangerous Minds" thing. It's long on rant and short on supporting documentary evidence. (Very, very, very long on rant.)

It's been true for a long time (a year? two?) that if you go to the Facebook web site and don't immediately select "Sort / Most Recent", then you don't see shit. It's not clear to me that what people are complaining about is any different than this years-old situation that "Sort / Top Stories" sucks.

The Toughest Bridge in the World

They are not raising it because the Norfolk Southern Railroad doesn't care: it's their bridge and the only thing they want is to guarantee the safety of their trains. "As far as they are concerned, they solved that problem by installing the crash beam," 11foot8 says. Any potential solution -- like raising the bridge or lowering the road -- is too expensive to be worth it.

The city of Durham installed warning sings along the three blocks that precede the bridge, but the imbeciles still keep ramming into it once every month on average.

9 years ago
Wow, we've already sold out all of the general admission tickets for Booootie tomorrow! (There are two VIP booths still available, but those will go soon.)

We will have some tickets available at the door, but you'd better finish up that costume and get here early!

Tickets are still available for tonight's Trannyshack Halloween party, and our fourteen DJ, four room Epic Halloween of Epicness on Wednesday, but those too are going fast... 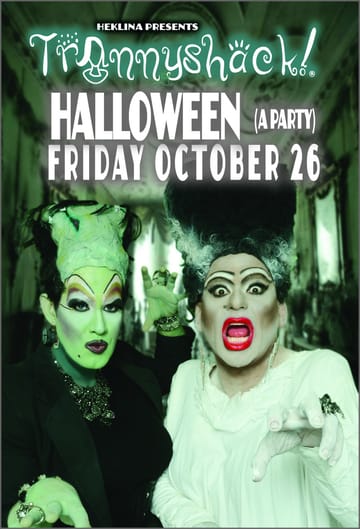 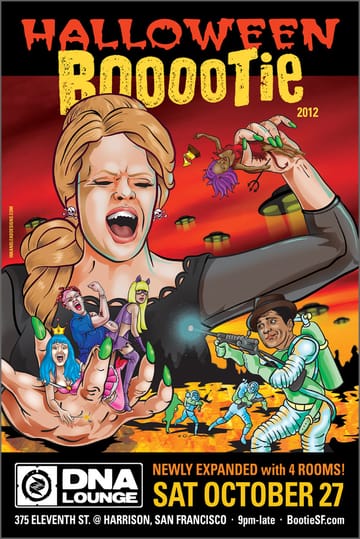 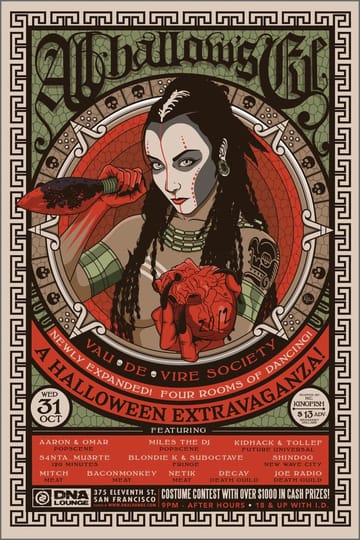 9 years ago
Why is that "RGB split effect" still not going away?

I have a new theory on it, though: it's nostalgia for the kind of gear that everyone had back in the 19A0s -- back when we all watched our LaserDiscs on small 3-gun front-projection televisions, and every time someone slammed a door in the house, the guns would twitch out of alignment. You remember that, don't you? Don't you?

Seriously though, I think the only time this effect has been put to good use was in Extraball by Yuksek and Amanda Blank, but in that case the halftone dots make it clear that they're referencing mis-registered print, not video. Most often you see it used as an apparent reference to "old, broken televisions" but televisions never broke that way so what the hell.

Here's a more typical offender, which I happened to see just today. Raised black-level 20% to make it feel "old-timey"? Check. Inserted video "glitch" effects that have never, ever occurred in nature? Check. (e.g. 0:36, 1:03).

See that filter-sweep knob on your fancy DJ mixer? Yeah, don't use that.

Other things that make me immediately hit "next" on a video without watching it:

I watch a lot of videos. I have opinions.