Don't suspect your neighbor: report him!

Nitrogen, and balls, but mostly balls.

10 years ago
(3:35.)
Scene missing! A video in this post has disappeared. If you know of an accessible version of this video (search), please mail me so that I can update this post.
7 Comments
Tags: balls, mpegs, scene missing

At roller derby, with Mom.

DNA Lounge: Wherein the booths and calendar are reconfigured.

10 years ago
The new soda lines are installed, and we now have fully-functional soda guns at all of the bars, including DNA Pizza and Above DNA. Also, the new bar upstairs is done, and its beer tower is installed, though the beer runs aren't fully hooked up yet. We've taken the two booths that we had to remove from the balcony to make room for the door, and are installing those downstairs next to the dance floor. It's a work in progress, but it will be done by the time doors open for Trannyshack in... four hours.

We're charging a bit more for VIP service for these two booths, since you actually have a pretty good view of the stage from them, unlike the upstairs booths. That means there are two "VIP tickets" buttons on the calendar pages now, which I anticipate will cause some confusion.

We have officially booked our first event at Above DNA! That would be Nachtmystium on November 9th. If you look at the November calendar you'll see that we are actually running three events that day: Mortified followed by Y3K at DNA Lounge, and then Nachtmystium simultaneously at Above DNA. Exciting times!

The calendar layout is a little cramped, but I'm not really sure how to un-cramp it without making the boxes no longer be square (and I really like them being square. Calendar boxes should be square.) 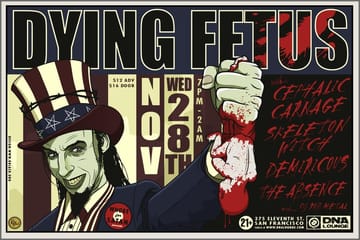 Hey, you can even buy this classy poster of Shawn in our store!

Also: let's give a warm welcome to our new talent buyer, Shawn Phillips. He will be familiar to you as one of the people who has been mixing your DNA Lounge drinks for the last decade, and also the guy who promoted a large percentage of the metal shows we've done here, as "Whore for Satan". So now he's our in-house booker, and will be taking care of all of your live music needs in the Above DNA space. (And definitely not just metal, mind you.)

These numbers will be confusing to goths, who have never seen a show here in the big room that had more than 200 people. Hint: someone lost money on most of those shows, either the promoter or the club or both. Much of the time, your ticket cost $12 but your friend's ticket cost $1000, so you should be nice to them. Say, by buying them a drink.

Facebook does not let you type the words "goatse.cx" in comments at all.