8 years ago
Sharkbait was a band who put on some of the best live shows I have ever seen in my life. I saw these guys dozens of times, mostly at the dearly-departed Paradise Lounge, right up the street. Someone just posted this video to Youtube of them playing at DNA Lounge almost exactly twenty-two years ago, on Sep 16, 1990. IT IS AMAZING YOU GUYS.

The fire! The smoke! It was a simpler time, when you could put on shows like this without living in constant fear of getting sued or having your insurance revoked.

Also, I think Condescending Wonka has something to say about this: 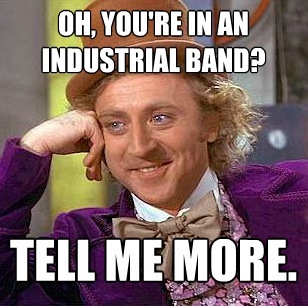 You've dosed your monkey, haven't you?

After two years of practice, the animals developed some mastery, getting about 75 percent of the easier matches correct and 40 percent of the harder ones, markedly better than chance guessing.

The monkeys were implanted with a tiny probe with two sensors; it was threaded through the forehead and into two neighboring layers of the cerebral cortex, the thin outer covering of the brain.

The two layers, called L-2/3 and L-5, are known to communicate with each other during decision making of the sort that the monkeys were doing when playing the matching game.

The device recorded the crackle of firing neurons during the animals' choices and transmitted it to a computer. Researchers at U.S.C., led by Theodore Berger, analyzed this neural signal, and determined its pattern when the monkeys made correct choices.

To test the device, the team relayed this "correct" signal into the monkeys' brains when they were in the middle of choosing a possible picture match, and it improved their performance by about 10 percent.

The researchers then impaired the monkeys' performance deliberately, by dosing them with cocaine. Their scores promptly fell by 20 percent.

"But when you turn on the stimulator, they don't make those errors; in fact, they do a little better than normal," said Robert E. Hampson of Wake Forest, a study author.

8 years ago
I'm thinking of doing a Kickstarter to pay for upgrades to the DNA Lounge webcast.

I'd like to make some improvements to the webcast, but I can't justify spending money on that because we don't make a dime from it. So that makes Kickstarter kind of a natural fit: the majority of people who benefit from the webcast are not in-person customers of DNA Lounge, so if we're to improve it, let's see if the people who will actually benefit from those improvements are willing to contribute...

The webcast has some nebulous PR benefit in terms of "brand recognition" or something, but like all advertising, it's impossible to attach a monetary value to that: I can't quantify how many people the webcast has transformed into paying customers. For every anecdote that goes, "I came to DNA because I heard of you through the webcast", I hear another anecdote that goes, "Yeah, I thought about going to that show but I just watched it from home instead."

So, I have two sets of questions for you, Dear Lazyweb,

The first and most obvious one is:

What kind of "rewards" would you be interested in? There are a bunch of obvious ones like tickets, sets of our merch, meet your favorite band when they play here, etc., but I'd like to hear other creative ideas. Serious and practical suggestions only, please. Let's just stipulate that the joke you were about to make would have been hilarious.

The second is more technical:

What kind of hardware should I be aiming for? I think it will be better recieved if I post a shopping list to show how expensive this really is, than if I just say "give me your monies and I'll spend them on cameras or something".

Specificity helps. Also, I want to be able to set the monetary target low, but say "if we exceed that by $N, then we'll do this better thing instead". That seems to be the winning approach with Kickstarters.

I don't have a very specific shopping list / wish list yet, and I could use your help with that. Here are my ideas of ways the webcast infrastructure could be improved. Help me attach prices to these, instead of the wild-assed guesses I have below.

So, what do you think?