10 years ago
I upgraded my eight-year-old Roomba and now I'm following the new one around and analyzing its new behaviors. It's must smarter, in its own insectile way. Go, little guy, go!

I have not yet decided where the googly eyes go on this one.

(@selfawareroomba has mixed feelings about the five second rule.) We also got some of this: My photos of My Life with the Thrill Kill Kult are up now. This is, I think, the sixth time we've had them. I do love that band. 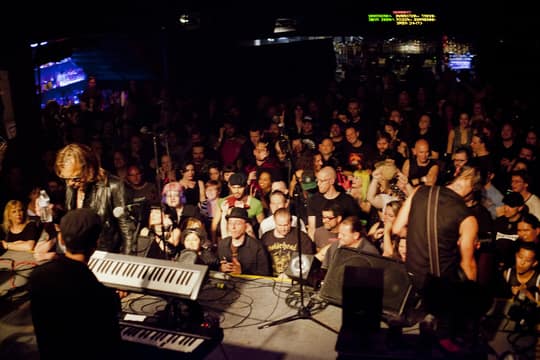 So, Groovie Mann was setting up the merch booth and Barry went over and said, "Hi, great to have you guys back again." Groovie responded,

We went from "Baby, you're the only one for me" to "Yeah so what was your name again?" within the same breath! That's ok, though, they're a sleazy band; you don't expect breakfast after.

Second best story of the day was a phone call:

"Hi, my teenage daughter went to see the Korpiklaani show at your club last night, and apparently after the show, she got on the tour bus and went to Arizona."

"She asked me to call and see if her bike is still locked up outside?"

Ladies and Gentlemen, Rock and Roll.

The horrifying physiological and psychological consequences of being Aquaman

10 years ago
The constant, unceasing screams of dying marine life

Golden age Aquaman can talk to sea life. Modern iterations can communicate telepathically with ocean creatures. Even excluding humans, the ocean is a brutal place. Aquaman, alone is consuming untold thousands of animals to sustain his svelte, 48,000 Calorie-per-day, figure. Seeing as he must continuously eat, there's little time for cooking, or even humanely killing his prey. He is surrounded by the psychic screams of every zooplankter that enters his cold-hearted gullet, each one, begging for mercy as it plunges into his hypertonic stomach.

His victims aren't the only ones he is forced to hear. Throughout the ocean, predators stalk their prey, parasites consume the eyes, tongues, and gonads of their unwilling victims. Superman avoids the screams of the suffering by being a callous jackass with some hyper-narcissistic code that forbids him from "interfering" with the path of human history (which is why he'll swoop in to stop a mugger, but has no problem letting Adolf Hitler march across Europe). Aquaman, however, loves the ocean with every porous, necrotic bone in his body. He is its protector. Which means that every dying sea creature breaks his tachycardic heart.

And we haven't even touched the consequences of an ocean exploited by human beings. Aquaman can see the scars left by every trawl, can feel the life being sucked out of the ocean, knows the name of every fish, dolphin, and crab whose life has been taken by our nets and lines. His life is the constant, horrible drone of unspeakable, unstoppable death.

But, aeschenkarnos on Metafilter explains why this article is kind of dumb:

This analysis suffers from the "but that's not how it works!" effect so common in so many reviews of comics, TV shows, movies, etc. For example, the principle of biological evolution as shown in the TV show Heroes.

No. The way it is shown in the story, is exactly how it works in the story. Characters in the story, by examining the actual facts and determining what causes them, are doing actual science. By insisting on ridiculous levels of caloric consumption, bringing up blatant nonsense about nitrogen bubbles in bones, etc etc when the plain fact before your eyes is that Aquaman does what he does and is just fine doing it, the author of the article puts himself in the analogous position of a real-world creationist. He has decided how Aquaman's world ought to work, because of his pre-existing experiences (ie, in what we might agree to call reality), and then against the facts before his eyes, he maintains that his interpretation is correct.

Aquaman is clearly visually indistinguishable from human, and yet he obviously can survive the deepest depths, swim instantly to the surface, doesn't appear to need to eat much, and isn't overly bothered by ecospheric predation. Given these facts before us, we must come up with an appropriate theory. If our theory--like caloric hyperconsumption, bone density, etc--doesn't fit the facts, it is the theory, not the facts, that we must discard.

Aquaman is an Atlantean, and much like Kryptonians, Daxamites, Amazons and a variety of others, Atlanteans are a humaniform species, with innate physical and mental superiority. (Arguably humans are a bizarrely weak version of the master template species, given that the majority of humaniform non-humans are much more powerful.) The exact consequences of this superiority are broadly known, however there is no clear theory yet formed as to the reasons why it exists. The Guardians of Oa probably know, but have evinced no desire to share that information.

Grant Morrison debunked this line of thought in a different way in his very entertaining autobiography/history-of-comics, Supergods:

I tend to believe the reverse is true: that it's adults who have the most trouble separating fact from fiction. A child knows that real crabs on the beach do not sing or talk like the cartoon crabs in The Little Mermaid. A child can accept all kinds of weird-looking creatures and bizarre occurrences in a story because the child understands that stories have different rules that allow for pretty much anything to happen.

Adults, on the other hand, struggle desperately with fiction, demanding constantly that it conform to the rules of everyday life. Adults foolishly demand to know how Superman can possibly fly, or how Batman can possibly run a multibillion-dollar business empire during the day and fight crime at night, when the answer is obvious even to the smallest child: because it's not real.

I'm just saying, this is all time you could be spending getting me a cocktail.

13 Comments
Tags: comics, mpegs, perversions
Current Music: Do Not Forsake Me Oh My Darling -- Episode 2: Dance of the Dead ♬

10 years ago
I wonder if there's any sensible way to allow people to Facebook-tag themselves in photos in the DNA galleries.

I understand the kids are into this whole "social media" thing, which is why I ask. It might catch on.

The easy way to accomplish this would be to just upload every photo I add to the web site's gallery to a gallery on Facebook as well, but that kind of duplication really rubs me the wrong way. Also, then there are two URLs for each gallery, and which one do I link to? The "real" one, or the one where you can tag yourself and your friends? Making bidirectional links between the photos on the two sites might be possible, but it would be a whole lot of work.

The DNA galleries have been around since long before Facebook existed and I fully expect them to outlive it as well, so obviously "post them to Facebook but not the DNA site" is not on the table.

A functional radio that is also a Tube Map.

Video. There are some small in-progress shots on his blog.