DNA Lounge: Wherein we have doors, and rails, and mirrors, and panic, but mostly doors.

10 years ago
Today was quite the flurry of activity, as much of the following was happening at the same time that Korpiklaani and friends were loading in and sound-checking:

We now have ACTUAL DOORS in both the upstairs and downstairs door-holes, that both open and close properly! This is truly a banner day. To some approximation, these photos are the desired end result of the last two years of work and correspondingly vast piles of green, leafy money. All the other things -- building the bathrooms, bolting in the girders, soundproofing the windows, and, in fact selling pizza at all -- were ancillary stepping-stones that were necessary to get to the point where these doors exist.

It's a long game. They will have closers and panic hardware (push-bars) tomorrow. You may notice that the paired doors open in opposite directions, because, for occupancy reasons, they have to function as bi-directional fire exits.

The right door in the first picture has weird-looking hinges because that door actually opens 180°, so that it won't block sight lines to the stage when it's open all the way. That took some doing to make work properly. The door and hinges had to be custom-made, and then there was some welding.

There's a huge amount of drywall around those downstairs doors. The fire department made us put two layers of drywall around the frame, which came out to be four full sheets and just about a hundred different pieces of drywall because of all the nooks and crannies necessary to fit a door frame in to a fairly complex hole through two different walls. Their reason for this was that the new wall construction has to be "two hour burn-rated", which makes some amount of sense until you realize two things: first, all of this "new construction" is like six inches wide; and second, the doors do not have to be two-hour rated. We're required to over-engineer the frame around the doors but not the doors themselves. Hello to yet another giant waste of time and money because bureaucrats are denied any incentive to behave as if they have any god damned common sense.

The new hand-rails started going in today, too. Here's something you'll never hear anyone say in any construction project ever: "They surprised us by finishing earlier than they said." But that's what happened. There's some jankiness to be sorted out with the work, but the Stick of Splaining is being vigorously applied. That last photo is of the mirror behind the new front bar. It's hard to take pictures of mirrors (and what color are they?) It's a very funny shape, because that corner of the room is a very funny shape. Shelves for bottles will go in front of it shortly.

Also today, three more holes went through the concrete to accommodate the new soda and glycol lines. (Four inch diamond-tipped hole-drill bits that can go through a foot of concrete cost $700. Things I didn't want to know.) Why the holes? Since we have two brand new bars, and one bar being converted from a beer-and-wine-only bar to a full-service bar, that means we have miles more tubing to run. Our kegs and juice boxes will still live in DNA's liquor room and walk-in fridge, so all the bars will be supplied from the same head-end. We do it this way so that we never have to haul kegs through the room during an event.

All of the sudden we've got less than a week to finish almost everything else.

See, one of the ways ABC likes to jerk people around is they tell you, "Call us when everything is done, and we'll schedule an inspection. That inspection will happen in usually about 20 business days." Nobody in their right mind wants to sit around with their thumb up their ass for 20 days, so we called them last week, when we thought we were safely 20 days from being done. And today they called and said, "We'll be there Monday." 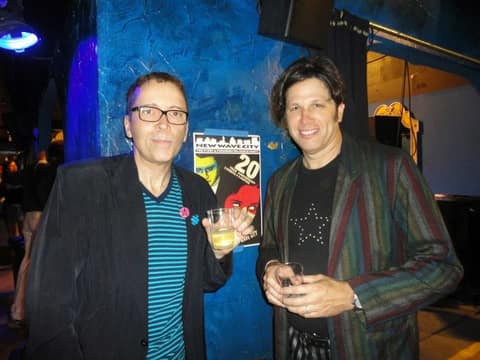 Photos are up of the New Wave City Twentieth Anniversary. Twenty years!

They also got a Mayoral Proclamation designating September 7th as "New Wave City Day", which is awesome.

Come see My Life with the Thrill Kill Kult's 25th anniversary show tomorrow. It will be good.

I hate you all.

"Swimming in the social stream."
"Crowdsourcing app discovery-platform."
"Can you talk about getting conceptual liftoff?"
"What's your current go-to-market strategy?"
"Now, let's talk about disrupting the disruptors."
"We're iterating our butts off, dude."
"Looks like it's searching for a use case."
"We're all about glocal right now."
"Collaborative consumption is truly a revolution."
"Plat-Ag." (As in "Platform-Agnostic.")
"You did one of the great pivots of all-time."
"We don't measure our success by financial results."

Oh PostScript, you so crazy

Our cash register just vomited out about a mile of this.

10 years ago
"Female Nipple Bulging, or F.N.B. for short"

The New Yorker got temporarily banned from Facebook for violating their community standards on "Nudity and Sex," by posting this Mick Stevens cartoon:

Some sleuthing showed that the offense was actually caused by the inclusion of these two dots in the cartoon,

which, by the way, also contained these two non-offending dots.

Can you spot all four of them in the banned cartoon? Hint: it's like "Where's Waldo?," but for nipples.

Now, we could have fought the ruling on technical grounds, because, let's face it, these female nips, by any stretch of the imagination, no matter how prurient, are just not bulging. But rather than fight the battle of the bulge, let's point out, that while female nipple bulging, or F.N.B. for short, is a potentially serious problem, with as yet no known cure, it also has no known victims. That is, unless you count freedom of expression, common sense, and humor.

It's too bad that the cartoon isn't actually funny. See also the "Christ, What An Asshole" Theory.