DNA Lounge: Wherein the Apocalypse has been averted!

11 years ago
Ladies and Gentlemen, we have our construction permit! This is our architect, Jason. He is smiling because that giant roll of paper sticking out of his bag is our finalized construction permit.

On Monday, we got signed and stamped by the Fire Department, then that same day, our architect hoofed it back to Building for more signing and stamping, and then it went to another phase that nobody had mentioned before called "Quality Assurance". I was hoping that this was the part where they ask me to fill out a survey asking how well I felt I had been "serviced", but no, that's not a thing that happens. Apparently "Quality Assurance" is the phase where someone else puts a stamp on the form saying "I see that there are sufficient stamps on this form." Then today, Jason was finally able to run around with the stamps and meta-stamps and get a permit issued!

As to the looming apocalyptic requirements from last week: 1) They agreed that yes, we can have two doors with a pole between them instead of a single set of double doors without a pole; and 2) the thing about replacing the wall just kind of... went away.

These are not the droids I am looking for. I can move along. Move along.

One bit of fallout from this wall thing is that they want the doors in the wall to have electromagnetic hold-opens on them, so that if the fire alarm goes off, they swing closed by themselves. Which is a pain in the ass, but, whatever. These doors were already required to have panic hardware on them (push-bars) which are ridiculously expensive, so the doors were already going to cost like $2K each. The magnetic bullshit will make them be more like $3K each. It sucks, but it's great compared to how things were looking last week.

Here's a classic moment they described to me about how these meetings go. Our guys are sitting on one side of the table, and a bunch of folks from Fire are on the other side. Things seem like they might be going ok, and then one of the Fire guys gets a look in his eyes like, "This can't be right, let me think... AHA! I've just thought of some new way to fuck your shit up!" What he says out loud is, "AHA! You need a Neighborhood Equivalency something-or-other!" I still have no idea what that is.

Our Permit Expediter says, "Ok, where do I get that form?" "Downstairs." "I'll be right back." Ten minutes later, he comes back with the completed form, and a check. 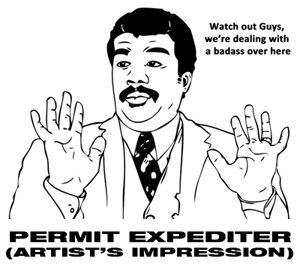 Then the guy from Fire throws up his hands and says, "Whoa, I don't usually receive those, you know, this is all kind of unusual, you'll have to talk to my boss about that." "Who's your boss?" Then our Expediter says, "Oh I know him," whips out his phone, "Hey, are you in the building? Great, I'll be right down." Ten minutes later, he comes back and hands the guy the signed and stamped form. "Anything else?"

That's the kind of bureaucratic badassery that I like to hear about!

Here's another good one:

There's a stairway going from the sidewalk to the second floor of the pizza place. It has a door that opens in. They tell us that all doors have to open out, so we have to turn that door around. But wait! Doors have to open out, but doors can't overlap the sidewalk by even an inch. So we have to build an alcove and move the door back. Fine. There's still room for a landing at the bottom of the stairs after doing that. But then someone looking at the plans says, "Oh, this isn't wide enough, there needs to be room to the side of the door, so that someone on that landing in a wheelchair can open the door."

This is a door that opens onto a flight of 22 stairs going up, and nothing else.

"Well, it's ADA, the law's the law, what can I do," says the bureaucratic flunkie.

Had anyone asked me that hypothetical question, my answer would have been, "You can use some common sense and approve the plans anyway, because that makes no kind of sense at all and you're not a crazy person." But that's not how bureaucrats work. There is no chance they can get in trouble for saying "no", so that's what they do. They have no incentive to make things work. I'd think that incentive would be, you know, "not being a crazy person" or "having pride in one's work" or even "basic human decency", but hey, what do I know.

Our architect got around that one with some paperwork and a Jedi Mind Trick or two. But come on.

Also today, we had our sound test by the Entertainment Commission. Back in February we had our hearing where they approved the expansion of our Place of Entertainment permit. After that, we had to get Fire and Building to agree to that as well, which they did, and the sound test on the new space, which we just passed. So at this point, it's down to the paperwork on the EC's side, and we'll have that permit in a few weeks.

All that's left now is ABC.

But those guys love us, so I'm sure that'll be no problem.