In only approximate order of favoriteness, here is my year-end wrap-up. As usual, a few of the entries on the following list were released earlier than 2012, but that is when I discovered them, so I'm allowing some slack. Though most were actually released in 2012.

This year I acquired about the same amount of new music as last year: roughly 150 new releases from around 120 bands, almost all released within the last 3 years.

And with that, I've again run out of steam. Like I say every year, I find the writing of these reviews to be exhausting, but I hate it when I read the "top ten" lists of other people and they're just lists with no explanation, so I make a token effort. Here are a few more bands that you should also check out, and take it as no affront to them that I timed out before writing about them:

And I'll throw these on the list as "honorable mention", despite their having not yet released an album's-worth of tracks:

And finally, here's mixtape 124, which includes one track by (almost) all of the above artists.

The Spectacular Thefts of Apollo Robbins

Street pickpockets generally work in teams, known as whiz mobs or wire mobs. The "steer" chooses the victim, who is referred to generically as the "mark," the "vic," or the "chump," but can also be categorized into various subspecies, among them "Mr. Bates" (businessman) and "pappy" (senior citizen). The "stall," or "stick," maneuvers the mark into position and holds him there, distracting his attention, perhaps by stumbling in his path, asking him for directions, or spilling something on him. The "shade" blocks the mark's view of what's about to happen, either with his body or with an object such as a newspaper. And the "tool" (also known as the "wire," the "dip," or the "mechanic") lifts his wallet and hands it off to the "duke man," who hustles away, leaving the rest of the mob clean. Robbins explained to me that, in practice, the process is more fluid -- team members often play several positions -- and that it unfolds less as a linear sequence of events than as what he calls a "synchronized convergence," like a well-executed offensive play on the gridiron.

If a crew of pickpockets is like a football squad, then its star quarterback is the "cannon," an honorific generally reserved for pickpockets skilled enough to ply their trade without the help of a team. This is also known as "working single o." Robbins works single o. He is his own steer, stall, shade, and duke man, though, unlike street criminals, he lets his victims know that he will be picking their pockets.

People would go to the Catacombs and treat him as the patron saint of big cocks.

Finally a newlywed woman came to see him because she was married to a guy who was not well-endowed. She took a cloth and rubbed it on the mummy's dick, and then rubbed it on her husband's dick. The next time she had sex with her husband, his penis seemed larger and fuller and she was about to orgasm except that at that moment she looked up and saw it was actually the ghost on top of her. Everyone thought she was crazy, but then it happened again the next time she had sex. They had to set up an exorcism for this ghost.

How does one expel a penis ghost?

They had a blacksmith make a tight-fitting sheath made of metal, and once the husband got erect the ghost came out and got caught in the codpiece. They threw holy water at him.

I actually have a friend from Sicily and one of these sex ghosts turned out to be her great uncle! That was the ghost who was accused of stealing women's underpants. So it's real. Or at least he's real, whether his ghost stole women's underpants or not.

Wait. He was stealing underpants?

They kept finding women's panties behind a particular mummy. They would get stashed there, like trophies. Finally, a girl called the police and said she'd been having visions of a ghost entering her home. He would proposition her and when she turned him down he'd steal her panties. The monastery accused the girl of planting the underwear there herself, but then they set up a test, and sure enough another pair of undies still appeared behind the mummy.

How does one deal with an underwear-stealing ghost?

Someone went to the mummy and told him they would bury him in the ground unless he stopped stealing underpants. After that no one's underpants disappeared.

Does this kind of thing still happen?

There's a really bizarre story from the 20th century, about a guy who had severe diarrhea and chronic flatulence. He stole a skull and started saying prayers to St. Roch and St. Sebastian, the patron saints of plague and suffering, and also shitting on the skull daily. He had a theory that by crapping on the skull he could switch intestines with the body the skull had been attached to. The ghost kept warning him, quit shitting on my skull. But he kept at it and he succeeded in transferring his intestinal problems to the ghost. The problem was that the ghost had died of testicular cancer, and in return he gave that to the guy. That's how he died. One of the dangers of necromancy is you don't really know who's on the other side or what they're going to give you in return.

MONSTERS ARE REAL: True Facts About The Angler Fish

On a postcard I just received:

How to Precisely Dissect and Analyze a Turd

An In-Depth Analysis of a Piece of Shit: Distribution of Schistosoma mansoni and Hookworm Eggs in Human Stool

DNA Lounge: Wherein I remind you about your New Years Eve plans.

9 years ago
Step right up and get your tickets, Ladies and Gentlemen.

It's our first New Years Eve Bootie here since 2009, and it's going to be huge. For the last few years, Bootie had taken their NYE party elsewhere because we just weren't big enough for it, but now that we have expanded to four rooms, they're back home! Mashups, live performances, acrobats, three balloon drops, champagne, and Death Guild in the lounge!

To get you in the mood, Bootie have just released their Best of Bootie 2012 CD: 20 30 downloadable tracks for free! 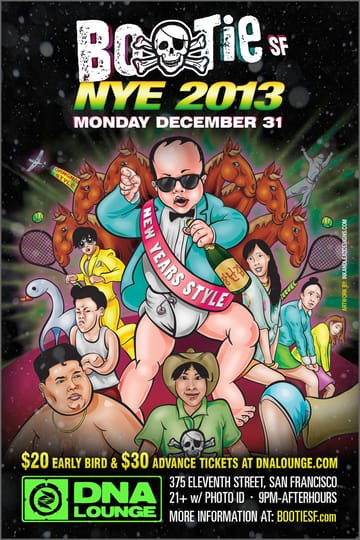 You don't have a whole lot of time left to get your $30 tickets for NYE: it will go up to $40 soon, and it's likely to sell out! Even if it doesn't, you don't want to be spending your midnight standing in line, do you? Advance tickets get you inside before people buying at the door. On a night like this, it makes a big difference.

Are you one of those people waiting until the last minute to see if you get a better offer? You know that results in you standing on the sidewalk in the rain, right? Buy.

10 years ago
Aquarium bursts in shopping centre in Shanghai

The tank was installed just two years ago but investigators say a combination of low temperatures and weak materials caused the catastrophic collapse.

Three lemon sharks and dozens of turtles and small fish were killed in the incident.

I just want to get the word "invisijism" out there:

Because there's currently only one google hit on it, and that's a typo.

@Theremina: TEH ONE RING MEETS TEH SHIRE SAUSAGE #FOREVERTWELVE @ Denny's
@jwz: You think Gollum never put his precious on his precious? Srsly.
@Theremina: If you look closely, you will observe a bead of Gollum's special sauce glistening on the tip of the aforementioned sausage.
@jwz: How could Gollum not have been a chronic masturbator? Look at how dissipated he was!
@jwz: Also, nobody could see. He was painting the walls with his invisijism constantly, mark my words.