DNA Lounge: Wherein note is taken of Mortified, Blow Up and Fringe-related media.

9 years ago
We are in the midst of a run of 13 consecutive days of being open, so please be gentle to our staff this week! This is somewhat unprecedented for December, so go us!

The first episode of The Mortified Sessions, the celebrity TV version of our beloved every-2nd-Friday show (which is happening here this Friday at 7pm!) aired tonight on the Sundance Channel. If you missed it, it seems to be playing quite a few more times, so go Season Pass that, ok? And this week is their 6 year anniversary, so it should be quite the show.

Followed later that night, as always, by Blow Up. About which Austy Pants made this very odd little PSA: 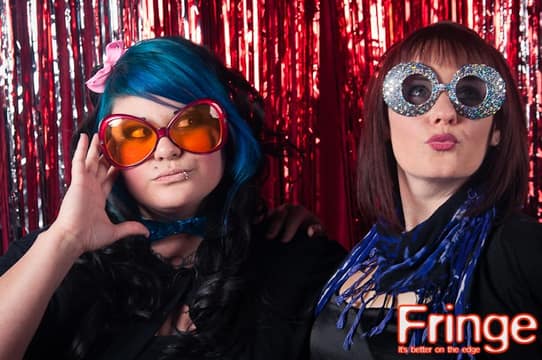 Also, photos are up of Fringe, which was great fun, and of Silicon Valley Rocks, our Thursday fundraiser for Music in Schools Today.

And! Today is the 78th anniversary of the repeal of Prohibition. I'll drink to that.

9 years ago
This doesn't really seem that menacing. They could definitely up the menace here.

It does seem designed for rectal excursions, though, which has a menace all its own.

9 years ago
Ever since MacOS 10.0 was released, text fields have supported Emacs bindings for the single-character Control commands, showing that there were people inside Apple (and, presumably, NeXT) who were right-thinking and sensible.

I care deeply about this, because these commands have been burned into my hands' muscle memory since dinosaurs walked the earth, and every time it screws up, my brain basically falls over.

Proper behavior for "Kill" is this:

Specifically, cursor motion, self-inserting characters, and basically everything else takes it out of kill-appends mode. The only time kills should append is if you type ^K twice in a row with no other intervening typing or motion.

From my experiments, it seems that what Apple currently does is this:

To demonstrate, type this into any text area (e.g., a Safari page with a form):


Then position the cursor at the beginning of the "two" line, and type this:

You should now be looking at:

But instead you have:

Is there any way for me to fix this myself? It appears that the key bindings are defined in /System/Library/Frameworks/AppKit.framework/Resources/StandardKeyBinding.dict (a normal plist file) and available commands are listed in /System/Library/Frameworks/AppKit.framework/Versions/C/Headers/NSResponder.h, but I'm guessing there's no easy way to replace the definition of the deleteToEndOfParagraph: action with something else...

Update: Holy shit! I am told that this bug was fixed FIVE HOURS after I posted this -- Webkit bug 73888 and the patch. Thanks, Alexey!

This right here, people, is a grand triumph of open source.

Maybe the bug would have gotten the same kind of swift attention inside Apple (Alexey does work for Apple, after all) but none of us would have known that it had even been acknowledged until it showed up in a release, due to Apple's unconditional secrecy on all things. But because they do Webkit development out in the open, we all get to follow along! Which is awesome.

Of course I still have to wait who-knows-how-long until this fix is rolled into a build of Safari that I'm able to run, instead of being able to just spin my own or download a nightly like for normal software, so that's not ideal, but... baby steps.

Back on 10.6.8 and iOS 4, I was able to sync my notes among my iPhone, iPad and desktop by just plugging them in. I could edit the notes in Mail.app on my desktop, or on either mobile device, and as long as I didn't edit on two different devices without syncing between, everything was fine.

Apparently to do "over the air" syncing of notes, Apple demands that I set up an email account on me.com, which is stupid. (What, storing my notes is beyond the capabilities of iCloud?) So I'm trying to do normal, tethered syncing like before, and while it seems possible to sync between iPhone and iPad -- but maybe only if I plug them in to my Mac in the right order? -- it never syncs into or out of the notes-editor inside Mail.app.

Is this Apple's way of telling me, "We would prefer that you use some other note-taking application than the one we ship with both our operating systems?"

My note-taking needs are extremely simple -- I don't need reminders or checkboxes or searching or images or even multiple fonts. Just a couple of pages that I can type text on, and be able to edit it from my desktop or mobile devices.

Update: Ok, it's possible to store your notes on any IMAP server, but apparently Mail.app now gets confused if you have moved your IMAP notes out of your inbox and into another folder on that same IMAP server, and starts treating them as "On My Mac" notes even though they still appear to be "IMAP" notes. Or something.

This seemed to work:

After that, all three of my devices seem to be syncing with each other with somewhere around 2 minute latency.