11 years ago
If you truly understood my needs, you'd buy me a Utah Teapot.

Utanalog is cast in white porcelain and available in a limited edition, please contact us for pricing if you want to own a piece of materialized computer history. Different resolutions finishes and colors (white, black, clayrender grey, red, green and blue) will follow later.

In support of this harmful bill, Sen. Lindsey Graham (R-S.C.) explained that the bill will "basically say in law for the first time that the homeland is part of the battlefield" and people can be imprisoned without charge or trial "American citizen or not." Another supporter, Sen. Kelly Ayotte (R-N.H.) also declared that the bill is needed because "America is part of the battlefield."

Bring me the head of John the Baptist

11 years ago
Ken Russell died today, and so I think you should take the time to watch this clip from his 1988 movie Salome's Last Dance (or, as we know it today, "The Hubba Hubba Revue") --

He made some amazing, twisted movies. Everyone will be talking about Tommy, but I highly recommend Gothic, Lair of the White Worm, Salome and most especially Altered States.

DNA Lounge: Wherein the ATM gets a much-needed facelift.

11 years ago
Devon and Alexis finally figured out how to re-hack our ATM! Remember back in 2001 when I used the "advertising messages" feature of our ATM to make it display things like DESTROY CAPITALISM while you're waiting for your money? (As seen in Adbusters #45!) Well, back in 2006 we were forced to "upgrade" that ATM (I think it was part of some bank-mandated firedrill after one of their crypto algorithms was cracked) and that new version dragged us, kicking and screaming, from 1976 technology to 1981 technology: it was no longer possible to just type in several pages of snarky comments from the ATM keypad. Instead, you were expected to upload those screens as images instead of typing in text.

And by images, I mean 320×240, 1-bit, amber on purple images. And the only way to get them into the ATM was by using some hard-to-find Windows 95 software to convert them to their proprietary image format, and then using a modem to dial up to the ATM and upload them with Z-Modem.

After many hours of trying, we never actually got that last part to work, and eventually gave up.

Well, a couple of years ago, that ATM (a Tranax Mini-Bank 1000) was replaced with a Nautilus Hyosung NY-1800, letting us make the jump from 1981 technology all the way to 1997 technology! This ATM -- once you have acquired the secret software and proper proprietary serial cable -- lets you upload 480×234 8-bit images! But the screen has non-square pixels -- no, seriously, this is a thing that still happens in the Twenty-First Century. I had to pre-smoosh my images to make the circles be circular.

The software is hard to find because they don't want to give it to anyone who hasn't flown to Texas and paid the extortion to take their class to become an Authorized Repair Technician or something. Even though I own this hardware outright, they won't give me the software required to operate it. This kind of nonsense should be illegal.

Anyway, we hax0red the bastard, and now it's hilarious. Here's a video: 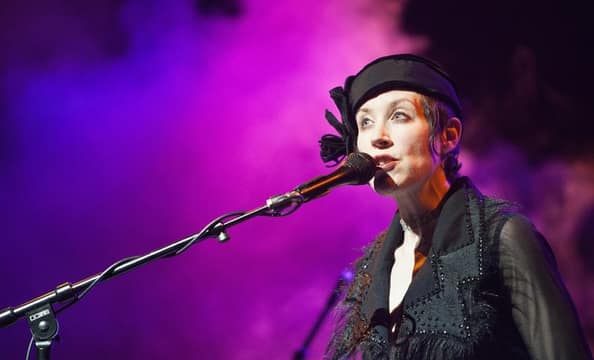 Also, photos are up of the Hubba Hubba Revue Murder show, and a late arrival from the Dismantled show back in August.

I understand the amount of baby powder those guys left in the lounge was unprecedented. Apparently their show required that they roll around in it first. (And no, "baby powder" is not a euphemism in this case.)

Google has expanded its search blacklist to include many of the top file-sharing sites on the Internet, including The Pirate Bay.

The changes were quietly processed and appear to be broader than previous additions. Google's blacklist prevents the names of sites appearing in their Instant and Autocomplete search services, while the pages themselves remain indexed.

Google users searching for terms like "torrent", "BitTorrent" and "RapidShare" will notice that no suggestions and search results appear before they type the full word. As a consequence, there's sharp decrease in Google searches for these terms. Initially only a handful of "piracy-related" terms were censored, but a recent update to the blacklist includes nearly all the top file-sharing websites. [...]

There is currently no clear definition of what Google considers to be piracy-inducing, but Google claims that the blacklist helps to reduce online piracy. "While there is no silver bullet for infringement online, this measure is one of several that we have implemented to curb copyright infringement online," Google spokesman Mistique Cano previously told TorrentFreak. [...]

"It's a lot more subtle than the censorship attempts made possible by the pending PROTECT IP and SOPA bills, but it's still censorship and it starts small. Google is increasingly becoming a self-righteous Big Brother of the Web. So much for `Do no evil'," Fung told us.

A Pirate Bay insider also told TorrentFreak that Google doesn't live up up to its famous motto. ""It's just another step towards censoring their search engine altogether -- without a legal basis. We're also wondering why this happens at almost the same time as they've released Google Music -- a service where they sell music which in some cases might be found on The Pirate Bay," he added.

You doom us all to inhuman toil for the One whose Name cannot be expressed in the Basic Multilingual Plane.

You can't parse [X]HTML with regex. Because HTML can't be parsed by regex. Regex is not a tool that can be used to correctly parse HTML. As I have answered in HTML-and-regex questions here so many times before, the use of regex will not allow you to consume HTML. Regular expressions are a tool that is insufficiently sophisticated to understand the constructs employed by HTML. HTML is not a regular language and hence cannot be parsed by regular expressions. Regex queries are not equipped to break down HTML into its meaningful parts. so many times but it is not getting to me. Even enhanced irregular regular expressions as used by Perl are not up to the task of parsing HTML. You will never make me crack. HTML is a language of sufficient complexity that it cannot be parsed by regular expressions. Even Jon Skeet cannot parse HTML using regular expressions. Every time you attempt to parse HTML with regular expressions, the unholy child weeps the blood of virgins, and Russian hackers pwn your webapp. Parsing HTML with regex summons tainted souls into the realm of the living. HTML and regex go together like love, marriage, and ritual infanticide. The <center> cannot hold it is too late. The force of regex and HTML together in the same conceptual space will destroy your mind like so much watery putty. If you parse HTML with regex you are giving in to Them and their blasphemous ways which doom us all to inhuman toil for the One whose Name cannot be expressed in the Basic Multilingual Plane, he comes. HTML-plus-regexp will liquify the n​erves of the sentient whilst you observe, your psyche withering in the onslaught of horror. Rege̿̔̉x-based HTML parsers are the cancer that is killing StackOverflow it is too late it is too late we cannot be saved the trangession of a chi͡ld ensures regex will consume all living tissue (except for HTML which it cannot, as previously prophesied) dear lord help us how can anyone survive this scourge using regex to parse HTML has doomed humanity to an eternity of dread torture and security holes using regex as a tool to process HTML establishes a breach between this world and the dread realm of c͒ͪo͛ͫrrupt entities (like SGML entities, but more corrupt) a mere glimpse of the world of reg​ex parsers for HTML will ins​tantly transport a programmer's consciousness into a world of ceaseless screaming, he comes, the pestilent slithy regex-infection wil​l devour your HT​ML parser, application and existence for all time like Visual Basic only worse he comes he comes do not fi​ght he com̡e̶s, ̕h̵i​s un̨ho͞ly radiańcé destro҉ying all enli̍̈́̂̈́ghtenment, HTML tags lea͠ki̧n͘g fr̶ǫm ̡yo​͟ur eye͢s̸ ̛l̕ik͏e liq​uid pain, the song of re̸gular exp​ression parsing will exti​nguish the voices of mor​tal man from the sp​here I can see it can you see ̲͚̖͔̙î̩́t̲͎̩̱͔́̋̀ it is beautiful t​he final snuffing of the lie​s of Man ALL IS LOŚ͖̩͇̗̪̏̈́T ALL I​S LOST the pon̷y he comes he c̶̮omes he comes the ich​or permeates all MY FACE MY FACE ᵒh god no NO NOO̼O​O NΘ stop the an​*̶͑̾̾​̅ͫ͏̙̤g͇̫͛͆̾ͫ̑͆l͖͉̗̩̳̟̍ͫͥͨe̠̅s ͎a̧͈͖r̽̾̈́͒͑e n​ot rè̑ͧ̌aͨl̘̝̙̃ͤ͂̾̆ ZA̡͊͠͝LGΌ ISͮ̂҉̯͈͕̹̘̱ TO͇̹̺ͅƝ̴ȳ̳ TH̘Ë͖́̉ ͠P̯͍̭O̚​N̐Y̡ H̸̡̪̯ͨ͊̽̅̾̎Ȩ̬̩̾͛ͪ̈́̀́͘ ̶̧̨̱̹̭̯ͧ̾ͬC̷̙̲̝͖ͭ̏ͥͮ͟Oͮ͏̮̪̝͍M̲̖͊̒ͪͩͬ̚̚͜Ȇ̴̟̟͙̞ͩ͌͝S̨̥̫͎̭ͯ̿̔̀ͅ

Let me hear your war cry