11 years ago
Oooh, R. Black just sent us his third flyer for our Halloween weekend, and it's purty: 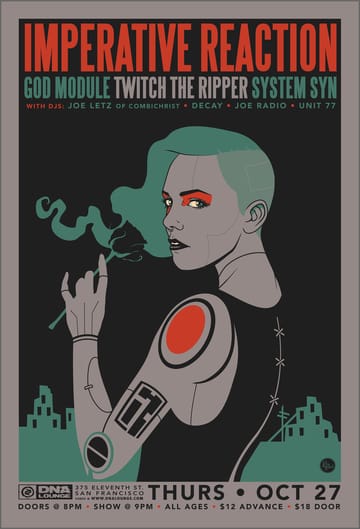 Who doesn't like fembots? Bad people, that's who. Anyway, I said yesterday that we'd probably be printing posters of these, but on second thought, probably not. People never buy our posters. We sell like one a month, so it's not worth the printing cost. (This is where a few of you say, "Oh, I would totally buy that poster!" and I don't believe you. Go buy some old ones!)

I would be remiss if I didn't point out that one of the bands listed on that flyer is God Module! You remember God Module. Back in 2003, they played a show here, and when I pointed out that they had faked the whole thing, the guy told me that it's impossible to play electronic music live, and demanded that I take down my blog post or else he would destroy our reputation in the whole wide industrial scene. I'm surprised he's deigning to play here again.

How Do You Autopsy a Whale?

Moore uses a Japanese whaling hook, which is useful for pulling back sheets of blubber to get at the animal's internal organs. He carries a bone saw -- formerly his mother's -- to get through jaws and vertebrae to find the location of a fatal injury.

As you may know, years ago some fresh young face on the Gnome team decided, for no sensible reason, to re-implement the xscreensaver daemon from scratch and call it "gnome-screensaver". This re-write was still able to run the 95% of xscreensaver that comprised the actual, you know, screen savers. It ran them badly, but it ran them.

Well now I'm told that they've removed the ability to run screen savers at all from gnome-screensaver.

Apparently the Gnome 3 party line is that if you want something more visually pleasing than "lock your screen and power off the monitor", you are wanting something that is Wrong.

Is this really true? Because it sounds too crazy to be true, even for Gnome.

Obviously I think that gnome-screensaver shouldn't have been written in the first place, but the idea that they are shipping what purports to be a complete desktop system, and it can't run screen savers at all is just... bafflingly nutty.

It simplifies my life, though, since I will no longer get people sending me misdirected bug reports about gnome-screensaver. We're back to, "if you want a screen saver on Gnome, uninstall gnome-screensaver and install xscreensaver".

Just stumbled upon this post by googling "xscreensaver gnome 3". So here are my findings.

Officialy it's over : Gnome 3 hasn't got any screensaver anymore (it just puts the monitor in sleep mode), and won't ever support this feature in the future. According to their mailing list, that'll be the job of someone else - if someone really wants to write a Gnome Shell extension for that purpose. Ubuntu plans to add it back themselves. Also, it seems that xscreensaver won't ever work, but I just tried to install it on my Arch Linux setup and it runs fine, at first glance.