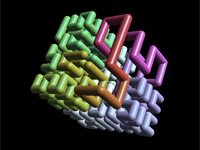 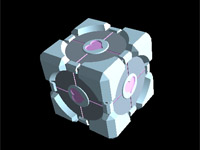 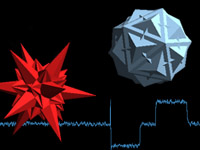 XScreenSaver 5.15 is out now. Three new hacks this time, Hilbert, CompanionCube, and TronBit!

Looking back, it seems that I haven't written a new screen saver since 2008! (SkyTentacles, and the 3D rewrite of Sonar). But in the last three days, I wrote three new ones. Go figure.

(Well, a bit more than three days because I had a couple of false starts with Hilbert without getting anywhere, but once I turned the corner on that (see what I did there?) it came together pretty quickly.)

Hilbert's performance isn't fantastic at depths above 5 but whattayagonnado. Oddly, it starts grinding even in wireframe mode, and all the pain appears to be on the GL side. You'd think that drawing a couple million line segments wouldn't be that big a deal, here in the future.

I couldn't decide whether the Weighted Companion Cube should do the usual "spinny, wobbly" thing, or the BouncingCow thing, so it can do both. Before you complain, yes, I realize that multiple cubes is non-canon. Think of it as a fever dream.

You can now point your Image Directory at an RSS URL (e.g., Flickr) in the image-manipulating and slideshow hacks.

By mildly-popular demand, the MacOS DMG now also contains interactive stand-alone applications of Apple2 and Phosphor, so you can use them as retrocomputey terminal emulators, just like you can on Linux.

If you use Linux in a Japanese locale, please let me know whether the unlock dialog looks right, and whether you can use non-ASCII characters in your password.

I could also still use some confirmation of the installation instructions on Gnome 3 systems.

I finally bit the bullet and "upgraded" to XCode 4, which was a huge pain in the ass. I still find it largely incomprehensible, especially when it comes to adding or copying targets, but I figured I couldn't put it off forever. The most frustrating part about this is that XCode 4 has apparently gone out of its way to make it impossible to build MacOS 10.4 and/or PPC binaries (which XCode 3.2.6 was still able to do), which means that 10.5 Intel is now required. This bums me out, because I still have a mostly-functional hand-me-down PPC MacBook! It's not even that old, and now it's no longer possible to target software at it after only two OS revs? Madness. I live in dread of the endian-specific bugs that will sneak in now, but then, maybe it doesn't matter any more.

I don't have access to a 10.7 machine (I have the fear) but I'm told the savers work there.