This collection of 29 horses' teeth was assembled by Louis Auzoux (1797-1880), a French doctor who made models of humans, animals and plants for use in teaching medicine and anatomy.

They demonstrate how horses' teeth age, the effects of wind-sucking and crib-biting, and the fraudulent methods employed to make horses seem older or younger than their true age.

The Smurf is actually the result of a symbiotic relationship between two organisms. We believe that Smurfs put their 'embryos' in the button of a developing mushroom. From a distance, Smurfs seem like they are wearing a hat and pants but as you can see this is a fallacy. The fungus provides camouflage and protective epidermal layers for the creature, while the creature provides nutrients and mobility for the spreading of spores.

Smurfs are believed to be a hunter gatherer society. As you can see, this little guy is returning from a successful venture. It is generally difficult to spot a Smurf; they are very apprehensive and cunning. Sadly though, it is rumored that they are hunted for their medicinal properties. It's hard to determine but it is thought that there are not many colonies of Smurf left.

11 years ago
A Utah movie theater has been fined more than $1,600 for showing "The Hangover Part II" while serving alcohol to patrons.

The state's liquor board says Salt Lake City's Brewvies theater falls under the same laws that govern strip clubs, which are prohibited from having fully nude dancing if they serve alcohol.

The board says the fine was warranted because of explicit scenes in the movie showing female, male and transvestite nudity. Other scenes that violated state law included a monkey simulating a sex act.

Before you go all "LOL Mormons", let me point out that this is also illegal in California.

Apparently this was happening at "Ciprani Residences", an expensive private club with condos. You keep it classy, plutocrats.

Degeneration: Woman with a Cube

"All my 3D objects are afflicted with a degenerative disease. Gripped by terror, they understand what fate awaits them. Gradually they disintegrate, face after face they lose their appearance, with a fatal outcome. In this way the 3D objects die."

The Comic Book Legal Defense Fund today announces that it has received the intellectual property rights to the Comics Code Authority Seal of Approval in an assignment from the now-defunct Comic Magazine Association of America, which administrated the Code since the 1950s. [...]

The CBLDF will take over licensing of products bearing the Comics Code Seal, including t-shirts, providing a modest source of income for the organization's First Amendment legal work. Graphitti Designs is currently offering t-shirts with the Code Seal to benefit CBLDF.

DNA Lounge: Wherein we have mugs!

11 years ago
We will now be serving coffee at DNA Pizza in properly-branded mugs. And, of course, they're also on sale in the store: 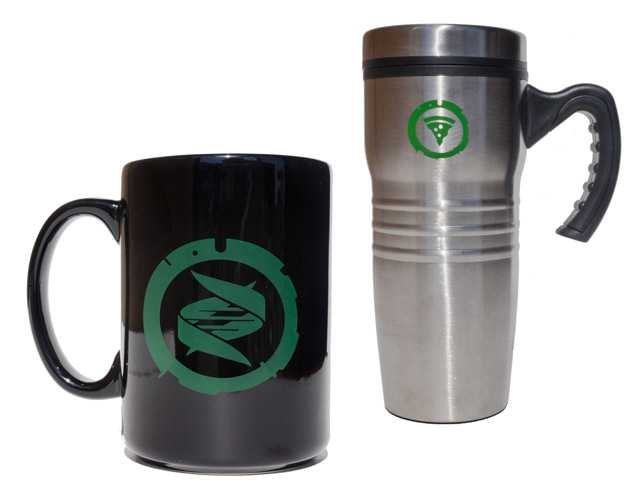 The travel mug is a good deal, because any time you bring it back, we'll fill it with drip coffee for $1.

Also, we got a few of these cute "coffee stencils", so that even our foam can be properly branded: Also, photos went up a little while ago of Hubba Hubba Revue's 5th Anniversary.

The North Pole: Here Be Monsters

In the 14th century, a Franciscan monk from Oxford, whose name is unknown, traveled the North Atlantic. He described the geography of the Arctic, including what he presumed was the North Pole, in a book called Inventio Fortunata, or "The Discovery of the Fortunate Islands." He gave King Edward III a copy of his travelogue around 1360, and some say an additional five copies floated around Europe before the book was lost.

What followed next was a game of telephone that stretched across centuries. In 1364, another Franciscan described the contents of Inventio Fortunata to Flemish author Jacob Cnoyen, who, in turn, published a summary in his own book, Itinerarium.

Unfortunately, Itinerarium also went missing--but not before Gerard Mercator, one of the most prestigious cartographers of the 16th century, read it.

Mercator, writing to an English scientist named John Dee in 1577, cribbed word for word from Itinerarium's description of the North Pole: "In the midst of the four countries is a Whirl-pool, into which there empty these four indrawing Seas which divide the North. And the water rushes round and descends into the Earth just as if one were pouring it through a filter funnel. It is four degrees wide on every side of the Pole, that is to say eight degrees altogether. Except that right under the Pole there lies a bare Rock in the midst of the Sea. Its circumference is almost 33 French miles, and it is all of magnetic Stone."

When Mercator published a world map in 1569, he used this description as the source for his illustration of the Arctic--based upon the third-hand summary of a lost book written by an unknown monk 200 years earlier.

11 years ago
Now, I don't know nothin' 'bout birthin' no sharks, but my first thought reading this was, "Wait, sharks are fish, don't all fish lay eggs??" Well, apparently not.

I remind you, as always:

After mating, a female produces as many as 40 fertilized embryos, separated between two separate wombs. The embryos take nearly a year to fully develop, but they begin hunting long before that. After about two months, their own yolk sacs go dry. Hungry, they start eating their brothers and sisters. After the rampant in utero cannibalization, only one shark -- the biggest and strongest -- is left in each womb.