11 years ago
This video is cute:

And this is the commercial they watch:

11 years ago
Some press!

It's four in the morning and you're starving. Where should you go?

San Francisco eateries aren't very good at staying open into the wee hours, so we've compiled a list of places for you to go to in case the cupboard is bare when you want a midnight snack. New to the Scene
DNA Pizza (371 Eleventh at Harrison) is the new kid on the 24-hour dining block, starting around-the-clock service this week. On the menu: "The Carnivore" and "The Whole Damn Vegan Garden" pizzas.

Also, did I mention that we now have lunch and dinner specials?

We ran some print ads a few weeks ago, which we rarely do: 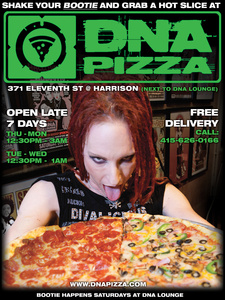 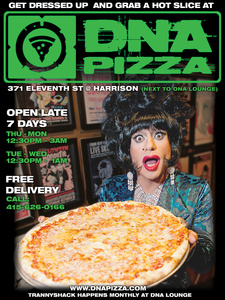 (See that pizza on the left? You see what we did there?)

The Chronicle wrote up the Drag Kings show:

Drag King Contest a winner at the DNA Lounge

Nothing could drag down last week's 16th annual S.F. Drag King Contest at the DNA Lounge - not even, say, a no-show by numero uno contestant Ryder Moore. No worries, with consolation performances by last year's winner, Hamm Graham & the Wham Bamm Thank You Ma'ams, which socked the mob with a ramshackle sing-along to "Paradise by the Dashboard Light," and the Rebel Kings stepping up with a "Star Wars"-themed mime-athon to the sound of "Ballroom Blitz."

That Star Wars act was, in fact, pretty great.

And here's a blog post with some videos of last week's Bootie where they connected up with the Bootie party that happens in Second Life (for the second time):

It was a hugely fun event, and as promised, I did indeed dance my ass off. That said, I do wish the mixed reality aspect came off better at the DNA Lounge.

Apparently, the club's big screens could not display SL running at high resolution, so Keela had to use an old viewer running at a lower resolution, and consequently, the video feed wasn't super great. With all that, I think most of the real life clubbers didn't quite get what was happening on the screen. When the DNA Lounge's emcee asked them all to give a shout out to the clubbing avatars in Second Life, a drunk girl near me shouted, "Can you please speak in English?!"

All that to one side, I'd love to see more mixed reality clubbing events like this, just with better deployment. When they're done well, they're seriously cool. I once helped run one at a party in the Mission district, and the SL feed was so fascinating, all those beautiful fricking hipsters actually stopped dancing to gawk at the avatars.

(My understanding is that the technical difficulties were because the prepartory words, "our video projectors take composite or S/Video. Not VGA, not HDMI, and not DVI" were insufficiently clear. Oh well.)

Seems like our network held up find under the load, though, which is nice. The DSL fire-drill appears to have worked.

Mortified followed immediately by Blow Up + Popscene! Ticket sales for Mortified have been brisk, so get here early if you want a seat!

I, for one, welcome our new 21-amino-acid worm overlords. and their friends the gasoline-shitting bacteria.

Just 20 amino acids are used in natural living organisms, assembled in different combinations to make the tens of thousands of different proteins needed to sustain life. But Sebastian Greiss and Jason Chin have re-engineered the nematode worm's gene-reading machinery to include a 21st amino acid, not found in nature.

At Scripps, researchers showed in a paper in PNAS how one of those three letter words could be re-assigned, so that cells would read it as an instruction to incorporate an unnatural amino acid, one not normally found in living organisms. But that was in the bacterium E. coli; until now, no one had succeeded in doing the same in a whole animal.

So far it is just a proof of principle - the artificial protein that is produced in every cell of the nematode worm's tiny body contains a fluorescent dye that glows cherry red under ultraviolet light. If the genetic trick failed, there would be no glow.

But Dr Chin says any artificial amino acid could be chosen to produce specific new properties. Dr de Bono suggests the approach could now be used to introduce into organisms designer proteins that could be controlled by light.

Researchers unveiled a new method for rapidly converting simple glucose into biofuels and petrochemical substitutes. In a paper published online in Nature, Rice's team described how it reversed one of the most efficient of all metabolic pathways -- the beta oxidation cycle -- to engineer bacteria that produce biofuel at a breakneck pace.

On a cell-per-cell basis, the bacteria produced the butanol, a biofuel that can be substituted for gasoline in most engines, about 10 times faster than any previously reported organism. "That's really not even a fair comparison because the other organisms used an expensive, enriched feedstock, and we used the cheapest thing you can imagine, just glucose and mineral salts."

Gonzalez's team reversed the beta oxidation cycle by selectively manipulating about a dozen genes in E. coli. They also showed that selective manipulations of particular genes could be used to produce fatty acids of particular lengths, including long-chain molecules like stearic acid and palmitic acid, which have chains of more than a dozen carbon atoms.

"This is not a one-trick pony," Gonzalez said. "We can make many kinds of specialized molecules for many different markets. We can also do this in any organism. Some producers prefer to use industrial organisms other than E. coli, like algae or yeast. That's another advantage of using reverse-beta oxidation, because the pathway is present in almost every organism."

In the research published Wednesday, doctors at the University of Pennsylvania say the treatment made the most common type of leukemia completely disappear in two of the patients and reduced it by 70 percent in the third. In each of the patients as much as five pounds of cancerous tissue completely melted away in a few weeks, and a year later it is still gone.

In the Penn experiment, the researchers removed certain types of white blood cells that the body uses to fight disease from the patients. Using a modified, harmless version of HIV, the virus that causes AIDS, they inserted a series of genes into the white blood cells.  These were designed to make to cells target and kill the cancer cells.  After growing a large batch of the genetically engineered white blood cells, the doctors injected them back into the patients.

As the white cells killed the cancer cells, the patients experienced the fevers and aches and pains that one would expect when the body is fighting off an infection, but beyond that the side effects have been minimal.