12 years ago
The good stuff is at around 9:16 when you start getting a look at the mechanism.

DNA Lounge: Wherein we hang out a second "Kick Me" sign.

12 years ago
Today we went down to the ABC office to fill out another enormous pile of paperwork. When we did this earlier this month, it was to begin the process of transferring the pizza place's beer-and-wine license to us. Today, we started the process of "transferring" DNA Lounge's liquor license on 375 Eleventh Street to cover both 371 and 375, which is one of the many steps involved in fully merging the two businesses. So much paperwork. It took us like two and a half hours to get through it all, and we had filled out most of the forms before we got there.

The ABC offices, as you can see, combine the charm of the DMV with the comfort of a high school principal's office.

This trip resulted in a second window poster, pictured above. Nobody's going to understand what either of these mean, but we're required to post each of them for 30 days. We're also going to have to mail out letters to everyone who lives within 500'. Did you know that there are companies who do nothing but produce lists of addresses within a radius? It's a whole industry, because apparently people have to do these kinds of mailings all the time, and nobody wants to take the time to compile the list themselves. (You'd think you could just pull this out of Google Maps somehow...) A more interesting poster situation is going on inside DNA Pizza: we're framing and hanging a bunch of posters from old shows at DNA Lounge. (You'd have seen this picture earlier today if you followed "dnapizza" on the Twitters or the Facebooks, which you oughta!)

These posters were previously hidden away, covering the walls in the DNA back office where very few people ever got to see them. They don't cover every show we've had here, just the ones for which we printed posters, which is a good portion of the live shows, I think.

Once we have them all up, it should pretty much fill both of the walls in the back half of the dining room! We're going to have to pack them much more tightly together than in these photos to make them all fit.

Nope, I'm still not hard to shop for.

I guess this comes out to $6600 for four place settings. A bargain!

12 years ago
(Technically this would be "catch", not "juggling", but still -- holy shit!)
3 Comments
Tags: doomed, mpegs, robots 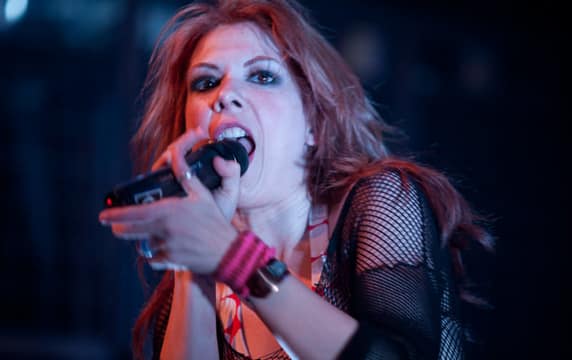 Photos are up of the latest Hubba Hubba Revue, "The Nineties Show", which the kids are saying may well have been the best Hubba ever. It included the In Living Hubba Fly Girls, a dot-com-bubble-based balloon-popping act, an acrobatic pole-dancing Leeloo Dallas, and a burlesque re-cap of the entire Clinton administration, among other fine and topical acts.

Have you watched the video that the Blow Up folks made to promote the "Miss Blow Up USA" contest at their April party? I keep showing it to people, because it's one of the most disturbing Youtube artifacts I've seen in some time:

I posted this question on my other blog, but I might as well ask here too. Any suggestions for point-of-sale software for DNA Pizza? Our requirements include:

There are a huge number of rather sophisticated looking pizza-restaurant-specific software packages out there for Windows that do this and more, but I haven't been able to track down any Mac versions yet. (Anything running on a Microsoft substrate is a deal-breaker, so let's not even discuss it, ok?)

We inherited a Linux-based POS from the previous owners, but it's crappy, and tech support is from a phone bank in India, so we're just going to junk it.

12 years ago
I respect anyone who opens with a cover of To Hell with Poverty. It's a bold choice, even if it did go a little Wyld Stallyns at the end.

But you don't question a Jedi.

(They covered Daisy Chainsaw!! Also, I have never seen moshing to Video Killed the Radio Star until now. Also, Vivienne Westwood must be so proud.)