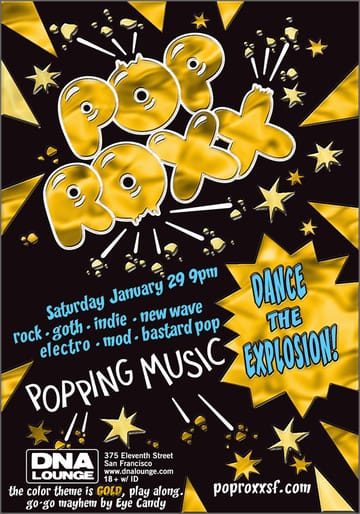 Don't forget, this Saturday is the one-time-only return of Pop Roxx, featuring My First Earthquake! The RSVPs on the Facebook invite suggest that it will be a good turnout. Do remind your younger friends that it's 18+ now -- the last time we did Pop Roxx we were still a 21+-only venue...

You may be interested to know that Steve Hardy is no longer the director of California ABC. The new director, appointed by incoming Governor Jerry Brown, is Jacob Appelsmith.

However, the above-linked article is wrong to say that Hardy was "ousted". Hardy was elected Mayor of Vacaville in the November election, so he would have had to step down as Director of ABC anyway.

Our first three photo sets of 2011 have arrived: Hubba Hubba Soviet Union, Trannyshack Star Search (some Trannyshack press: "Rotissary Ethnicity Jackson-Houston Ross named Miss Trannyshack 2011", and "Looking for drag that turns spectacle into art in S.F.") and also Six Apart's farewell party (Six Apart is the company that used to own Livejournal before selling it to the Russians. They were recently acquired by someone else, and now are, from what I can gather, an online ad network. Their current and former employees threw a farewell party here.)

Last week we also had a press event for the release of EA's Crysis 2 video game. They must have brought in at least 50 screens for that; it was an impressive array. I saw lots of people taking photos, but I haven't seen any of the galleries. Just a couple of blog posts with fleeting mentions of DNA: GamePro and Examiner.

Why Texting Failed Among the Victorians.

12 years ago
Ironically, it is only the uncharacteristic brevity that makes this McSweeney's article work:

Victorian: O fair nymph so lithe and so lively! O Naiad with the sedgeless bank! A ring of amethyst I could not wear here plainer to my sight, than that first kiss. The s

But really, @_hp_lovecraft_ did it better:

_hp_lovecraft_ H. P. Lovecraft
Greetings, oh Internet, of which I have heard so much about. I am but a humble author, experimenting with a new medium and casting my words