DNA Lounge: Wherein transformation occurs, and something about bacon.

11 years ago
The new transformer is installed. Our electrician doesn't know why the old one failed, but the best theory I've heard so far is that someone peed in it. Yeah, it's on the ceiling, 8' off the ground right inside the front door, but do you think that would stop them? Me neither. It took our electrician (pictured above, in full-on Mad Scientist mode) quite a while to install it, because even though the new one has exactly the same ratings as the old one, it was 10% larger and weighed 500 pounds instead of 400. Also the wires are twice as thick. Presumably some regulations have changed some time in the last ten years... They had to actually disassemble its case, cut several inches of steel off the top, and re-attach the lid in order to make it fit in the old space. That second picture up there is of them trying to find a way to lever it off of the lift and onto the shelf. Good times.

Let's hope this one lasts longer, because if the next revision is even larger and heavier, we're gonna have a problem. 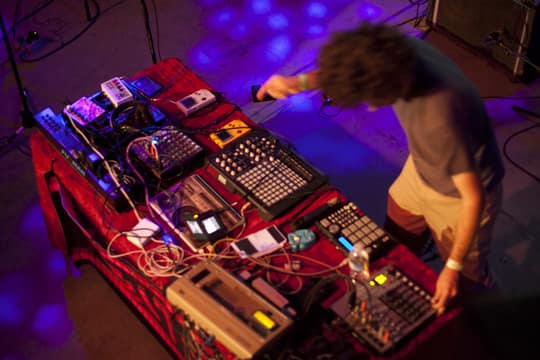 Also, photos are up of the Anamanaguchi show. You may know these guys from the soundtrack of the Scott Pilgrim game.

Best crowd banter: "Hey, the last time we played here, you had this fog machine that smelled like bacon. So if we could have a lot more fog, and if you could make it smell like bacon, that'd be awesome."

I've never noticed our fog juice smelling like bacon, but our crack kitchen staff got right on that and made them a big plate of bacon, which the band then handed out to the audience.

Hey iTunes 10, thanks for using 20% of my CPU even when *not playing anything*.