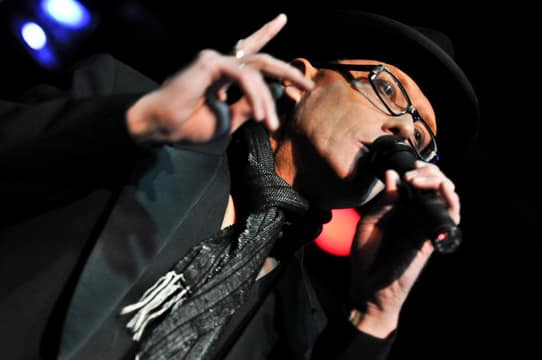 Photos are up of the David J & Jill Tracy show, and also what was to have been the Busta Rhymes show.

So, the promoter of that show apparently signed a contract with Busta Rhymes for a "meet & greet", not an actual performance. Then they promoted it as a live show, charged people fifty bucks to get in... and apparently just kind of hoped that once Busta was in the building, he'd play for free.

No, really. I'm not sure how they expected that to go.

This could have ended very badly, but Busta Rhymes handled it with class. He came out and made a long speech about how he didn't like disappointing his fans, but on the other hand, this was his job, and nobody likes to work for free. A few folks captured this on video.

Then, he hung around for a long time and chatted with and shook the hands of literally every person in the building.

In political news, you may have noticed that I haven't had any stories to tell lately about police harassment -- that's because, for the last several months, they've been leaving us alone! (And there was much rejoicing.) I assume all the recent press and public backlash has caused them to back off. Here's a recent article on the latest "Nighttime Safety Summit":

Truce talks: Police, party promoters, and politicians seek a detente in the War on Fun

If the incidents Chiu described represent a black eye for San Francisco's entertainment industry, the ABC and SFPD aren't necessarily squeaky clean either. "I sat down with [ABC director] Steve Hardy and told him that where the state was focusing efforts in San Francisco was completely misguided," Chiu said at the CMAC luncheon. "And I've spoken to [California Senator] Mark Leno to try to move them in the right direction." 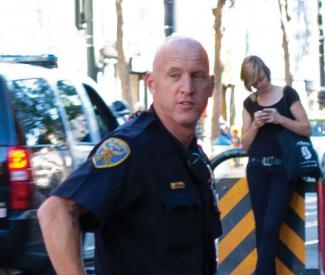 The break in the crackdowns of 2009, mostly attributed to severe tactics employed by SFPD Officer Larry Bertrand and ABC agent Michelle Ott, followed a widespread backlash to the sometimes brutal treatment legitimate business owners were receiving in the name of public safety. Back-to-back over stories in the Guardian and the SF Weekly, calls to the ABC from city officials, the formation of CMAC, and a RICO suit filed against San Francisco and the rogue officers spurred officials to rein in Ott and Bertrand.

Hardy told the Guardian that Ott is no longer assigned to alcohol enforcement in San Francisco. Bertrand has traded in his plain-clothes for a uniform and hasn't been seen busting into clubs, beating up the help, or confiscating DJ equipment for several months.

9 Comments
Tags: toys
Current Music: The Prids -- All Apart and No Fall ♬