And also this device.

11 years ago
I thought I'd share with you an incident report that I recently received:

At or around 12:30AM on the evening of Friday, Mar 26th during the Trannyshack event, I was at the back door when I observed a customer (black male, 5' 10" - 6', average build) wearing shorts, a vest and glasses pull down his pants and begin urinating in the garbage can located in the alcove to the back door. I approached him and informed him that he was no longer welcome in the venue. He shoved me and refused to leave. I repeated that he was no longer welcome in the venue and he attempted to shove me again. I physically restrained him and began moving him towards that back door. He became verbally abusive. [Another staffer] approached and began speaking with him and I reentered the venue. The customer remained in the vicinity for approximately 90 more minutes. [Staffer] persuaded him to leave after he retrieved his property from coat check.

What the report doesn't mention is that during those 90 more minutes, the customer stood on the sidewalk screaming that we were Nazis.

Because do you know who else didn't let you piss in hallway trashcans? That's right. Hitler.

You may recall that this is not the first time I've told a story very much like this one. What the hell is wrong with these people? 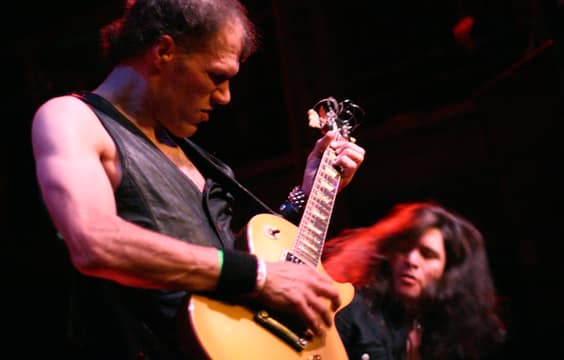 Photos are up of the Pentagram + Ludicra + Slough Feg + Orchid show last week. Also, a couple of reviews.

This week, Justin.TV released their free iPhone app. This means you can now watch the DNA Lounge video webcast on your iPhone! It seems to work pretty well.

Speaking of the webcast, the panning camera -- the servo-mounted camera that is mounted on a beam and does most of the work of covering the stage during live shows -- finally lost its mind, so the webcasts of live shows have been a bit static lately. We suspect that one of the Filthy Clowns destroyed the cable coming out of the camera while stomping around up there doing aerialist rigging. (It's not the first time they've done this; clown riggers are remarkably careless about other people's gear, you will be unsurprised to learn.) But, the cable in question is hard-wired in to the camera and difficult to replace, so I bought a new (used) version of the same camera from eBay. It hasn't arrived yet. Hopefully it will be no more flaky than the current camera, but I'm not holding my breath on that.

For the Google Juice: Do not buy a Panasonic WV-NS324 camera, it is junk! One of the worst electronics purchases I have ever made.

I probably should have tried to find a better camera, but it's actually pretty difficult to find a pan-tilt-zoom camera that is A) good in low light, B) network-controllable, and C) has an NTSC video output. Most networked cameras are shit in low light, and only output digital video over the network, which doesn't help me.

A Gallery of Edwardian Drunkards