"Duelling had been outlawed in France and this could
be considered a transgression against hospitality."

DNA Lounge: Wherein the War on Infusions gets some more press.

13 years ago
This story seems to have some legs; maybe ABC has finally done something absurd enough that the general public will take notice!

Here's a Chronicle article which finally outs Bourbon and Branch as one of the recently-harassed bars:

On a recent Friday night, they entered the speakeasy-themed Tenderloin tavern and warned bartenders they were breaking California law by altering alcohol - infusing it with the flavors of fruits, vegetables and spices.

At Bourbon and Branch, where the owners declined to comment, the Clermont Affair remains on the menu. So does the Stan Lee Sour, which features gin infused with hibiscus and jasmine. But customers can't order them. Fitting with the bar's theme, the cocktails are now stamped "Prohibited."

There was a three minute segment about it on the local TV news a couple days ago. It was a fairly neutral piece, but I found their smirking attitude irritating. It's like they're saying, "Gosh, isn't this a hilarious little piece of info-tainment, isn't this quirky." Well, it's not very funny to the people who are probably going to have to fight this nonsense in court.

But I guess that's why I don't watch TV news.

And finally, this afternoon, John Hinman was on the radio on The Karel Show talking about this. The official archive is here, but I've clipped out just Hinman's interview and 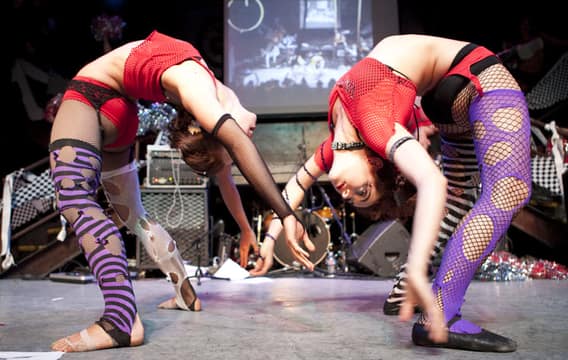 But enough about that. Come out to our irregularly-scheduled circus party Bohemian Carnival tonight. It is always amusing, and we haven't had one of these since July!

Don't Fuck with the Copyright Jesus.

Rio de Janeiro's archdiocese is demanding unspecified damages and interest from Columbia Pictures for showing the iconic landmark being destroyed in a worldwide apocalypse in a film that came out last year, the archdiocese's attorney, Claudine Dutra, said.

The archdiocese manages copyright issues related to the 40-meter (130-foot) high statue erected in 1931, which overlooks Rio with its arms outstretched.

Under Brazilian law, copyright resides in the author of a work until his death, and then is passed on to his heirs or estate or successor entity for another 70 years.

Emmerich said that he got approached by people who wanted their landmarks destroyed, such as the 101 Tower in Taipei, the world's tallest building.

But Emmerich was thinking of something even more explosive: the Kaaba, the cube-shaped building at the heart of Mecca, the focus of prayers and the Islamic pilgrimage called the Hajj; it is one of Islam's holiest sites.

"Well, I wanted to do that, I have to admit," Emmerich says. "But my co-writer Harald said I will not have a fatwa on my head because of a movie. And he was right. We have to all, in the Western world, think about this. You can actually let Christian symbols fall apart, but if you would do this with an Arab symbol, you would have a fatwa, and that sounds a little bit like what the state of this world is. So it's just something which I kind of didn't think was an important element, anyway, in the film, so I kind of left it out."

"The plaintiff gains the power to traverse multiple silos of data"

13 years ago
The Traceability of an Anonymous Online Comment

Suppose that I post an anonymous and potentially defamatory comment on a Boing Boing article, but Boing Boing for some reason is unable to supply the plaintiff with any hints about who I am -- not even my IP address. The plaintiff will only know that my comment was posted publicly at "9:42am on Fri. Feb 5." But as I mentioned yesterday, Boing Boing -- like almost every other site on the web -- takes advantage of a handful of useful third party web services.

For example, one of these services -- for an article that happens to feature video -- is an embedded streaming media service that hosts the video that the article refers to. The plaintiff could issue a subpoena to the video service and ask for information about any user that loaded that particular embedded video via Boing Boing around "9:42am on Fri. Feb 5." There might be one user match or a few user matches, depending on the site's traffic at the time, but for simplicity, say there is only one match -- me. Because the video service tracks each user with a unique persistent cookie, the service can and probably does keep a log of all videos that I have ever loaded from their service, whether or not I actually watched them. The subpoena could give the plaintiff a copy of this log.

In perusing my video logs, the plaintiff may see that I loaded a different video, earlier that week, embedded into an article on TechCrunch. He may notice further that TechCrunch uses Google Analytics. With two more subpoenas -- one to TechCrunch and one to Google -- and some simple matching up of dates and times from the different logs, the plaintiff can likely rebuild a list of all the other Analytics-enabled websites that I've visited, since these will likely be noted in the records tied to my Analytics cookie.

The bottom line: From the moment I first load that video on Boing Boing, the plaintiff gains the power to traverse multiple silos of data, held by independent third party entities, to trace my activities and link my anonymous comment to my web browsing history. Given how heavily I use the web, my browsing history will tell the plaintiff a lot about me, and it will probably be enough to uniquely identify who I am.

But this is just one example of many potential paths that a plaintiff could take to identify me. Recall from yesterday that when I visit Boing Boing, the site quietly forwards my information to the servers of at least 17 other parties. Each one of these 17 is a potential subpoena target in the first round of discovery. The information culled from this first round -- most importantly, what other websites I've visited and at what times -- could inform a second round of subpoenas, targeted to these other now-relevant websites and third parties. From there, as you might already be able to tell, the plaintiff can repeat this data linking process and expand the circle of potentially identifying information.

See also EFF's Panopticlick, which shows that even with cookies turned off, just your user agent string alone contains enough information to (on average) identify you to within 1/1500 people in the world.

The most surprising thing to me was that web servers can get the list of all the fonts installed on your system -- and that that is usually even more uniquely-identifying than the user-agent string.

Anyone with information on Happy's whereabouts can call the Ogden Police Department.

Ogden cops have out clown posse

It's not every day a clown breaks into your home, tosses a blanket over you and then scampers off with your computer.

That was the story Ogden police got when they went to investigate a burglary and theft, though. One of the suspects literally looked like a rather scary harlequin -- and detectives know who they are looking for: a career petty criminal with the street name of "Happy."

Sangberg said Pete now is being sought in a break-in and burglary late Wednesday in the 400 block of 21st Street. A second man, described by the witness only as Latino, also was thought involved.

The victim told police that he was asleep about 7:30 p.m. when he was awakened to find the pair standing over him. At first, the men yelled that they were cops, then threw the blanket over him.

"The guy said he could still see from under the blanket though, and he described one of them as having 'clown eyes.' "[The victim] said he knew him as 'Happy,' because he had been staying there with him until recently," Sangberg said.

Anyone with information on Pete's whereabouts can call the Ogden Police Department at 801-629-8221.

13 years ago
"Her positive outlook on the status of my crotch
really helped the experience to be relatively pain-free."

WARNING: Watching this will make you stupider: