DNA Lounge: Wherein the War on Fun gets some national press, plus fake bands.

11 years ago
This week's Pollstar has a good article on recent goings-on:

Siegan [of Red Devil Lounge] said he was cited for violating a condition of his license that forbids any sound to emanate from the inside of his building, regardless of a citywide noise ordinance that establishes a legal decibel ceiling.

"We have a condition on our license that says we may not have `any sound audible beyond the area under control of the licensee.'" Seigan said. [...] But the bottom line means that virtually any sound that leaks out of this venue apparently makes us in violation of our ABC license," Siegan explained.

Attorney John Hinman confirmed the condition of the Red Devil Lounge's license means that if a passerby can put his ear to the door and hear music, it would constitute a violation.

He explained that one music venue client was told that to comply with a Type 47 license - an all-ages, bona fide eating place - a condition would be that every seat must have a "a plate, knife, fork and water glass for every customer. In a theatre, no less."

Hinman declined to name the venue with the formal place setting requirements but said he represented many owners who didn't want to be "targeted" by being identified.

"The venue operators in this state are terrified. You've got a regulatory agency in this state that is running a jihad against them," Hinman said.

"They've been out in full force. They've been in to [Slim's] twice in the last week," Holliday said. "They didn't do anything to us, but they cited the [venue] across the street because the audience wasn't leaving fast enough.

"They gave [the owner] a citation for that. Give me a break. It was 1:45 a.m. and people weren't leaving fast enough," Holliday said.

Undignified though it is, this is the part where I again remind you to please donate to our Legal Defense Fund to make it easier for us to get through the twenty-five days in January when the ABC is forcing us to close, because one of their undercover agents saw "lewd behavior" at an over-21 gay event.

In (it bears repeating) San Francisco. 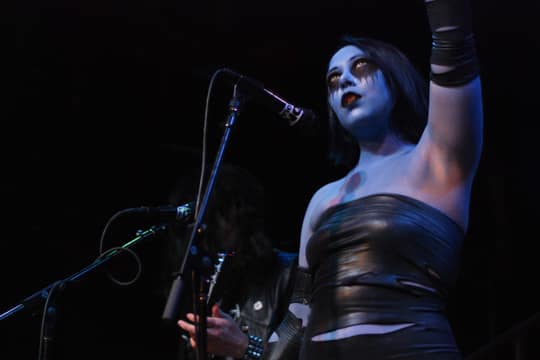 In more pleasant news, photos and videos of Ümloud, last week's charity Rock Band event, are up now. I wasn't expecting so many of the faux-bands to actually dress up! That was awesome.

It would have been hilariously circular if one of the games being played was the Rock Band predecessor game "SingStar Amped", because the intro sequence to that game was actually filmed at DNA Lounge in 2007, but alas, it was not to be.

DNA Lounge is available for all of your video game cut-scene needs.

Academic researchers have implanted a wireless brain-machine interface into a locked-in subject who is almost completely paralyzed.

The system uses brain electrodes to read signals meant for jaw and mouth muscles. An FM radio is used to transmit these brain signals to a computer, which transforms them into recognizable sounds. Currently the system is only able to produce vowels, but with more electrodes and more powerful algorithms it should be able to scale up to fully vocalized words.

A Blueprint for a Quantum Propulsion Machine

As Feigel puts it: "mechanical action of quantum vacuum on magneto-electric objects may be observable and have a significant value."

Of course, nobody is getting a free lunch here. "Although the proposed engine will consume energy for manipulation of the particles, the propulsion will occur without any loss of mass," says Feigel. He even suggests, with masterful understatement, that this might have practical implications.

So basically, you can create thrust by interacting with virtual particles that don't actually exist. It's not quite a zero-point generator, but it still relies on pushing against fiction.

I guess it works basically the same way as turning electricity into thrust by pushing against a planetary magnetosphere, but without the planet?