A series of tubes. 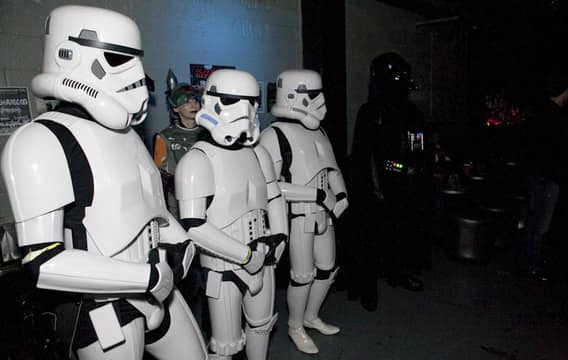 Photos and videos are now up of the Miss Hubba Hubba Pageant (wherein they wisely let the Wookie win) and of Villainy, with an appearance by the 501st Legion. This was the first time I had ever seen an Ewok gogo dancer, but perhaps I don't get out enough. I was surprised at how many people dressed up! It was very entertaining.

Also, tonight we've got a metal band called Vader playing. There seems to be something Imperial in the air of late.

Don't forget to come out to Meat tomorrow to continue gorging yourself on BBQ after your Thanksgiving dinner!

Oh Internet, is there nothing you cannot sell me?

13 years ago
Mussolini's 'brain and blood for sale on internet'

The granddaughter of Italy's fascist dictator Benito Mussolini has said that blood and parts of his brain have been stolen to sell on the internet. Alessandra Mussolini, a former showgirl turned MP, said she immediately informed the police when she found out.

The listing, on auction site Ebay, reportedly showed images of a wooden container and ampoules of blood. The initial price requested for the material was $22,000.