13 years ago
I find that I barely watch actual movies any more, because they all suck. But Sleep Dealer was fantastic, and you should watch it at once. It reminded me of Varley's Blue Champagne mixed with Haldeman's Forever Peace.

I can't actually remember any other movies I saw this year that I enjoyed. (Oh, Up. That was cute.)

Then there's the televisions.

13 years ago
I wish there was Mythbusters feed that omitted the interminably long and redundant "coming up next!" and "before the break!" bits. Do they think that people only watch the show accidentally while channel-surfing? I think it's a 20 minute show that they pad to an hour. (Ok, 42 minutes plus commercials.)
17 Comments
Tags: firstperson, tv
Current Music: The Coathangers -- Stop Stomp Stompin' ♬

13 years ago
Apparently SFPD have decided that if you are attending an unlicensed party that they shut down, they get to keep your laptop for three months:

S.F. cops may have gone too far in seizing DJ gear at underground parties

Over the past six months, music fans who have been spinning records -- or even just attending friends' events -- claim their laptops, soundboards, and mixers have been taken by the cops in police raids. The busted gatherings include an illegal dance party, an artist fundraiser, and a private Halloween bash. While it's unclear whether the lack of official permits was enough reason to close down all these parties, the bigger question is why the police are seizing and holding private property that DJs and attendees use eir art and living.

[...] "I tried to explain that I wasn't even playing at the party," he says. Nonetheless, his computer was seized by a cop who identified himself as part of a "task force," who told him that he shouldn't expect to get his laptop back "for at least three months." Other DJs at the party claim to have received similar warnings -- as well as threats of jail time, if they were seen DJing at warehouses again -- from officers who said they were part of a task force. (The SFPD claims it does not have a specific task force looking at underground parties, but it does routine checks in the SOMA area, sometimes with other agencies such as the California Department of Alcoholic Beverage Control, for permit and other violations.)

EFF Civil liberties director Jennifer Granick says she's concerned about the recent laptop grabs because they've apparently been done without arrests being made. She explains that police can seize the property of someone who is being arrested, and if, say, alcohol is being sold illegally or people have weapons in their possession, cops can confiscate those items. "You can't just go to a party and say, 'You can't have a party because it's after hours and you don't have a permit,' and just take people's property," she adds. [...]

Individual victims have their theories -- mostly concerning overzealous officers with anti-speakeasy agendas -- about why DJs and others are losing their property at underground parties.

Why has my city gone crazy? Why? 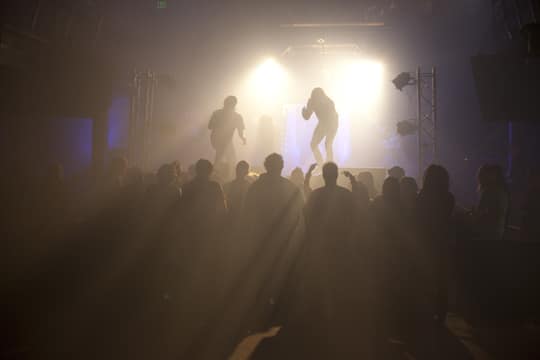 Meanwhile, BrokeNCYDE photos are up. It was everything I had hoped for, and was probably the coolest high school dance ever! Seriously, we had exactly four people over 21. Two of those were parents, and one of them looked a lot like "McLovin".

The first band had a very screamy song about Hello Kitty.

They sure brought a lot of lights.