DNA Lounge: Wherein the War on Fun gets some more press, and a legal smackdown is delivered.

14 years ago
7x7 Magazine posted a great video interview about the current ABC crackdown with Dawn Holliday from Slim's, Guy Carson from Café du Nord and Amy Miller from SonicLiving.

As usual, they didn't think DNA Lounge deserved a mention, but the SF Bay Guardian finaly did! (I think this is the first time they've mentioned ABC's assault on DNA Lounge at all, but better late than never.)

At issue is an arbitrary policy of the California Department of Alcohol Beverage Control. For the past two years, ABC has been on a campaign against a growing list of well-established clubs, bars, and entertainment venues in the city, an effort driven by vague rules and stretched authority. The community has rallied behind the bars and local politicians have spoken against ABC's crusade, but the agency isn't showing any signs of stopping. [...]

DNA Lounge's license is currently being held over its head because ABC saw operators as "running a disorderly house injurious to the public welfare and morals" after sending undercover agents in during queer events. State Sen. Mark Leno responded by telling the Guardian, "The ABC should enforce the law, not make statements relative to morals."

Café du Nord, Slim's, Swedish Music Hall, Great American Music Hall, Rickshaw Stop, Bottom of the Hill, and a list of more than 10 others are also fighting long, expensive battles to stay open -- but not because of underage drinking or drinking-related violence. In fact, most of these venues never had a run-in with ABC until two years ago. These bars' livelihoods are being threatened because of an arbitrary technicality on their alcohol and food license.

ABC was established in 1957 with the mission to be "responsible for the licensing and regulation of the manufacture, sale, purchase, possession, and transportation of alcoholic beverages." ABC is funded through alcohol license fees, and has been run by governor-appointed director Steve Hardy since 2007, about the same time the crackdown started.

Also, John Hinman, one of the lawyers representing several of the local clubs against ABC (you saw him in the NBC TV piece last month) gave me permission to post this email that he sent to the ABC legal team a couple days ago. It's long, but it is a good summary of how out of touch with reality the ABC lawyers are.

I appreciate that you are attempting to find a way to settle these Rule 64.2 cases. However, your view of the facts and articulation of department policy shows how far apart we really are.

This is your representation of the facts and the policy:

The representation that the "deviations" were "not minor" is belied by the accusation discovery and the claims.

Based on the discovery provided by the Department, the "changes" that purport to substantiate the accusation are variations from the planned opening hours and food service hours listed on the ABC Form-257 signed by the licensee at the time of licensure more than five years ago.

While the ABC-257 lists the opening hours as 5PM-2AM and the food service hours as 5PM to close, the investigators determined the premises opens closer to 7PM, with food service starting around 8PM and winding down around 11PM.

The evidence (including the evidence that we will introduce) will also show that opening and closing hours are routinely adjusted to account for circumstances such as season, special shows in town, availability of personnel, vacation schedules and the like. Moreover, the premises are open from 5 to 7 pm to serve dinner to the entertainers before the shows.

This is exactly the normal kind of "deviation" that every single licensee we have ever represented routinely undertakes in order to adjust to daily, weekly, monthly and seasonal variations in economic conditions and premises demands.

Here's what Judge Lewis (who as you know was a department prosecutor for many years) had to say on the record about this when he dismissed the accusation at the first hearing (before the identical charges were refiled):

"I just don't see the substantial changes... They still serve food. It's still a restaurant... They have a band. They have events. So what? Lots of restaurants do. You know, if they weren't planning to do it before and they do it now, you know, it's a restaurant. Things change. They have to survive...They can open at 6:00 a.m. if they want to, because there are no conditions. You now, that's entirely up to them. They can decide what's necessary for them to survive, as long as they comply with the law and/or any conditions that are on the license. And there aren't any... They can open an hour a day if that's all they want. They can open two days a week, if that's all they want." Transcript pg. 38-40.

That is exactly our understanding of the law as it exists and as it has been applied throughout California in all ABC districts; apparently other than San Francisco, which seems to have been singled out for special treatment for some reason.

The Bottom of the Hill case is similarly flawed.

Based on the discovery provided by the Department, the "changes" that substantiate the Rule 64.2 fifth count (the other counts relate to the 50/50 condition - which itself is flawed by no supporting nexus or substantial evidence and is an "underground regulation") include:

Again, you characterize these "deviations" as "not minor." We completely disagree. This is the identical type of unwarranted micromanagement presented by the Café du Nord case, as well as the other Rule 64.2 cases. These are not "deviations," these are normal daily, weekly, monthly and seasonal operating adjustments. The "not enough Mexican food to check the Mexican restaurant box" allegation is the most ludicrous thing we have ever seen from the department.

There is no precedent for your 64.2 theory as applied to Bottom of the Hill or Café du Nord. Under your theory every licensee would be checking in with the department every week and submitting a new 257 operational statement as they planned out what they needed to do to continue to survive through the next week. Do you really think that is what Rule 64.2 means? Do you really think that the department has the personnel to process and investigate licensee requests of that nature?

I have been practicing ABC law in California for over 30 years and your articulation of department policy is simply not accurate. Until these cases there has never been an "operational change" accusation absent a physical change in the premises EVER brought by the ABC. The sudden change in policy coupled with aggressive enforcement has caught the attention of the licensee community as well as the press, which is very interested in what is unfolding. What the department is doing here is creating new law from whole cloth.

If the department wants Rule 64.2 applied to permit this sort of constant micromanagement of premises that are operating within the clear boundaries of state law, we suggest that the matter be submitted to the legislature. If the department instead elects to carry these Rule 64.2 accusations forward, the department should be prepared to be attacked by licensees, their elected representatives and the media for enforcing rules that are not on the books.

That is also the reason we submitted the legal question to Senator Leno, who sent it to the AG (attached). The fact is that Rule 64.2 does NOT apply to operational changes absent specified changes in the physical premises. If we must pursue this simply to make sure that the appellate courts instruct the department how to interpret Rule 64.2, we will do so. The principal issue is that important to every licensee in this state. No business can survive without operating flexibility within the parameters of state law.

You might note that we never even got to the 50/50 food condition (which does NOT exist in 23038) or your theory that Section 23787 somehow creates a different class of license but you should be informed that the language of Section 23787 and the legislative history of Section 23787 are completely contrary to your conclusion.

We also know how Administrator Gomez testified in the GAMH case with respect to the department's "interpretation" of 23038 that ended up transmuting the words "bona fide eating place" into "bona fide restaurant." Again, that is an unwarranted and unsubstantiated rewriting of a basic operating statute. The department must honor the rule of law, no less than we must.

If you want a meeting in Sacramento to discuss this matter at greater length we will be available. However there will be no settlement short of the terms below.

Do you think ABC really cares whether enough Mexican food is being served? That's a smokescreen for what's really going on, which is a culture war. Lest we forget who the ideological forebears are of the batch of disingenuous bureaucrats we are currently fighting, here's a list of rules posted in Michigan dance halls in the 1920s: 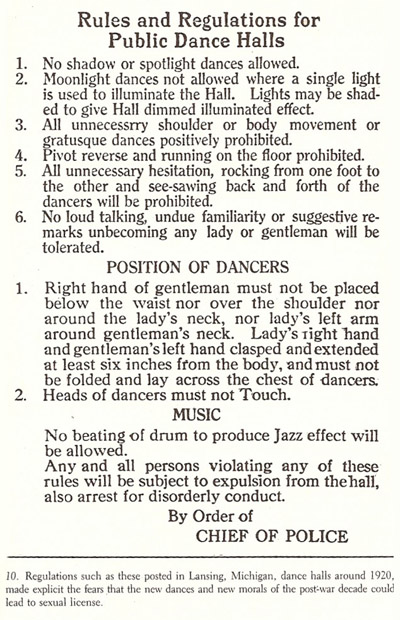 That is who these people are.