Cable car No. 15 is no off-the-shelf vehicle.

For more than five years, nearly 30 Municipal Transportation Agency crafts workers - carpenters, a patternmaker, metal workers, transit mechanics, welders and painters - labored on and off to build the cable car from scratch, working off blueprints more than a century old.

"It's a work of art," Christopher Hill, Muni's manager of cable car maintenance, said of the new 8-ton rolling monument.

Made of bronze, steel, red oak, white oak, knot-free fir, Alaskan yellow cedar, canvas and glass, No. 15 cost $823,000 to build. Just about the only materials not specially fabricated for the cable car were the lightbulbs, hinges, rope and screws.

No. 15 is the 12th cable car produced from the bottom up by Muni in the past two decades. It will be used on the Powell Street lines that run from Market Street downtown to Fisherman's Wharf.

The new cable cars ensure that the 136-year-old system - a designated National Historic Landmark and the only one remaining in the world that operates on public streets - will carry on. The average lifespan of a cable car is about 100 years.

DNA Lounge: Wherein the camera goes click and the back wall is ornamented. 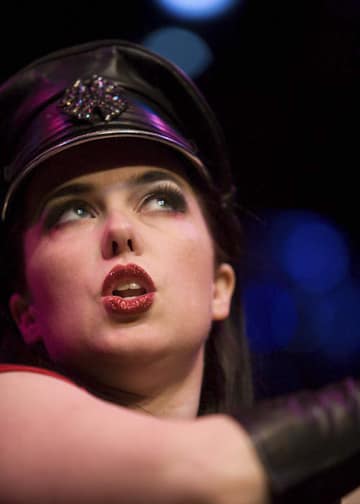 Some new photo galleries have made a recent appearance: Bootie, New Wave City (and a few more) Hubba Hubba Sideshow, and Foundry.

Also, the inverse sign is now hanging on the back wall, behind the stage. It looks awesome.

However, when the projection screen is pulled down it looks kind of funny, because the sign is a lot wider than the screen, so the sides of it peek out. The obvious fix is to get a wider screen that would cover the sign completely (about 12' wide) but those are over $800, and that's not really worth it. (Anyone got a used one? I checked Ebay and didn't find anything reasonable.)

"We're Getting Reports of a Massive Space-craft..."

Looking back, was the short enslavement of humanity by our alien overlords, Mieux-Mieux and Praxis, really such a "reign of terror," the way the cable news media's trying portray it?

Let's not re-write history. It wasn't all that bad.