14 years ago
Satire at the ballot box to 'honor' Bush

They want to rename the Oceanside Water Pollution Control Plant the George W. Bush Sewage Plant come January, when the next president is sworn in. During the inauguration, the group also wants supporters to participate in a "synchronized flush" -- a way to send a gift to the renamed plant, which supporters say, would be a "fitting monument to this president's work."

It sounds like a harmless joke, or maybe a college civics lesson gone awry. But they have already collected 8,500 signatures in support of the plan - 1,300 more than the minimum needed to put the question to city voters in November.

The biggest opposition in this Democratic stronghold, McConnell said, is people who oppose naming anything after the 43rd president.

Officials at the San Francisco Public Utilities Commission, which owns the plant, say they get the humorous intent. But they note that the plant is an award-winning facility that keeps the city's streets and the ocean clean.

"If you are looking for a place to make a negative statement about the Bush administration's impact on the environment, this would be the last place to do it," agency spokesman Tony Winnicker said.

San Francisco smokers are already banned from lighting up inside restaurants, bars and public buildings. Now Supervisor Chris Daly is proposing tougher restrictions, including no smoking in taxicabs, at outdoor cafes, in lines at the ATM, at farmer's markets and within 20 feet of the entrance to businesses.

The city's Department of Public Health says there's no safe level of second-hand smoke. "There's been research that shows the exposure in outdoor areas. The levels can be as toxic as indoor levels," said Alyonik Hrushow from the San Francisco Health Department.

Smokers may feel like pariahs in this city, but according to the American Lung Association, San Francisco is behind other cities including Belmont, Berkeley and Ross when it comes to trying to limit second-hand smoke.

This will be a slight hassle for us at the club, since we'll have to make people move farther down the block to smoke, but that's fine with me, because I find it absolutely disgusting to have to walk through that gauntlet of stench on the sidewalk in front of the exit door.

You're welcome to smoke, and to play with your own poop. Just keep your smoke, and your poop, off of me. 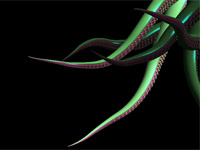 XScreenSaver 5.06 out now. Only one new hack this time, but it's a fine one, if I do say so myself. Also this includes a bunch of fixes related to adding, removing and resizing monitors (RANDR/Xinerama) on X11 systems, as I mentioned earlier. So please stress-test that junk. Or be devoured.
9 Comments
Tags: computers, firstperson, linux, mac, xscreensaver
Current Music: Revolting Cocks -- Attack Ships on Fire ♬

Did you know that cable cars poop sand?

There's something you don't see every day:

I assumed they were, you know, attached.

Which led to me learning about that sand thing:

The track brake does the lion's share of the work. The friction between wood and steel is what primarily stops the car. Make that dry wood and dry steel. Wet equals slick... this is not good.

This is where sand comes to the rescue. A small pedal on the floor is pressed to drop sand on the rails. The wheels crush the sand into powder, the powder soaks up the moisture and provides -- the magic word -- friction!

frickin' russian ravers with frickin' laserbeams in their eyes

"They all have retinal burns, scarring is visible on them. Loss of vision in individual cases is as high as 80%, and regaining it is already impossible," Kommersant quoted a treating ophthalmologist as saying.

Partygoers say heavy rains forced organisers to erect massive tents for the all-night dance party. The damage seems to have been caused when laser beams that were intended for outdoor use to illuminate the sky, were somehow turned or reflected onto the crowd.

14 years ago
Today is the seventh anniversary of our re-opening of DNA Lounge in 2001. So happy anniversary to us. And hooray for DNA Lounge: it's not just a job, it's also the longest and most dysfunctional relationship I've ever had.

14 years ago
Ladies and Gentlemen,

Having just spent the last two days in court, I am pleased to announce that in some small number of weeks, DNA Lounge will have exchanged our "ABC Type 48 On Sale General Public Premises" license for an "ABC Type 47 On Sale General Eating Place" license.

This means you can expect to see 18-and-over shows here in the very near future!

The actual permit is not yet in my hand, and it's not real until that happens, but they tell me it should be within a few weeks.

We had been planning for this since I bought the club in April 1999. We started construction on our kitchen in February 2006. And we turned in the application for permit transfer in April 2007. So depending on how you count, this process took either two and a half years, or eight years. And a truly obscene amount of money. But it's done.

Details, as they say, To Be Announced.

but the lease said no pets